Find out why the town of Gunpowder was forced to rally for the town's survival. 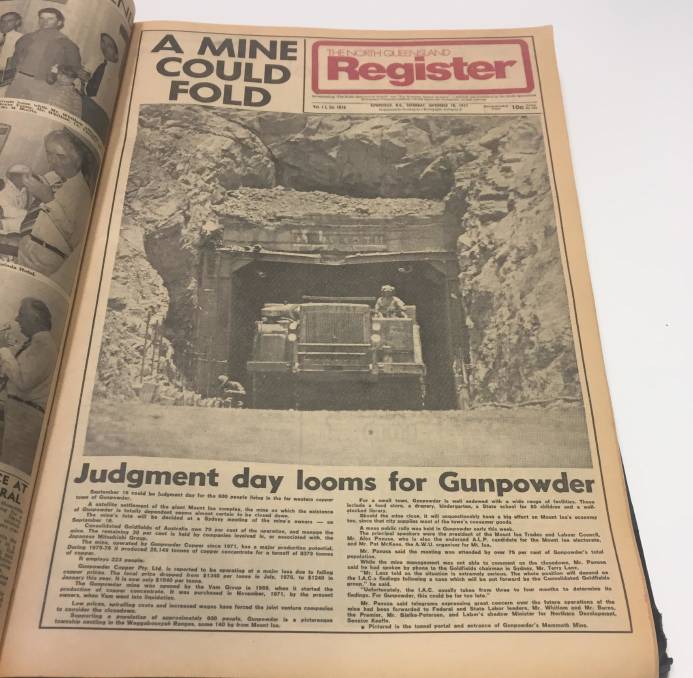 A small far western copper town, home to 600 people, was at risk of having its giant mine closed down.

The front page news listed September 16 as the scheduled judgment day for the town of Gunpowder, which was totally dependent on the satellite settlement of the giant Mount Isa complex.

The mine's fate was to be decided at a Sydney meeting of the mine's owners.

Consolidated Goldfields of Australia owned 70 per cent of the operation, and managed the mine, while the other 30 per cent was held by companies involved in, or associated with, the Japanese Mitsubishi Group. During 1975-76 the mine produced 26,149 tonnes of copper concentrate while employing 223 people.

Gunpowder Copper Pty Ltd was reported to be operating at a major loss due to falling copper prices that slumped from $1340 per tonne last July to $1040 per tonne.

Gunpowder was nestled in the Waggaboonyah Ranges and featured a food store, a drapery, a kindergarten, a state school for 80 children and a well-stocked library.

A mass public rally was held in the town earlier in the week attended by more than 75 per cent of the total population. Telegrams had been forwarded to premier Mr Bjelke-Petersen.

Union president Graham McCamley was among the speakers.

He stressed the need for beef unity but pointed out that specialist representation was the only proven way to achieve gains for the industry. He also gave a detailed examination of the new Australian Meat and Livestock Corporation.

There was a demonstration on computer selling, the first time such equipment had been on show in North Queensland.

A senior Queensland academic told the symposium that the cattlemen's share of the consumer dollar had plummeted by 25 cents in five years.

He said cattlemen had received 61 cents out of every dollar spent by NSW consumers on beef in retail outlets in 1971. In 1976 they received 36 cents.

Processors and retailers received money that once went to cattlemen.

Also read: Looking back on NQR headlines from August 13, 1977