A Mareeba earthmover will defy gravity in a first-time stunt show at the Rotary FNQ Field Days. 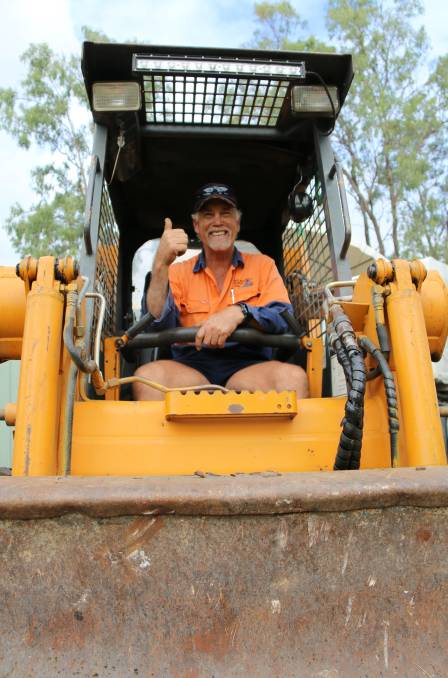 UNUSUAL TALENT: Rex Petersen is sure to impress visitors to the Rotary FNQ Field Days.

A MAREEBA heavy machinery operator will attempt to defy gravity in a first-time stunt show at the Rotary FNQ Field Days.

Rex Petersen started performing stunts with a skid-steer loader, commonly known as a bobcat, about 20 years ago and is now ready to bring his skills back to the main stage.

Mr Petersen has been working on some new tricks that are sure to impress crowds, some of which will include a ball and a beer.

The first show will be part of the official celebration on Wednesday, May 26 at 1pm in the arena, which will also include the event's first agricultural parade, featuring old and new machinery.

"Back in the early 2000s I used to do all the stunt stuff at the supercross at Mareeba Rodeo Grounds, so that's where it started because they needed machinery there to work on the track," Mr Petersen said.

"We used to have a couple skid-steer loaders working on the track and then I was putting on a little show in the half time break of mainly balance, that's what most of it is - balancing a machine on two little tiny wheels, holding it on the point of balance.

"Not many people have ever seen a machine on the point of balance, it's only the odd few that can do it. By the time you spend 15 minutes in there on two wheels, it's a workout."

Mr Petersen has been practising tricks with his vintage skid-steer loader in preparation.

"The newer machines are too safety conscious so you can't do these tricks with them, so I've had to borrow back one of my old ones and we're going to give it a coat of paint and make it look all pretty," he said.

"Then I'll do some practise of the tricks in my backyard ready for the field days."

Sponsored by
Record result for Pearce family of Telpara Hills stud.
Test
Hefty legal costs to defend its application for Fair Go Dairy Logo have forced QDO to withdraw.
Test
It is important to put into practice now policies and procedures to manage the risks of COVID in your workplace.
Test
Richmond and Hughenden are the preferred locations for a gin that could directly employ up to 35 staff and cost $35m to build, a feasibility study has found.
Test
An idea to host a brunch and raise money for breast cancer survivors that ended up raising $11,000 last year has spurred two Julia Creek women on to a bigger and better event at Sedan Dip on October 2.
Test
Numbers lifted to 2050 in Blackall this week.
Test
Numbers more than doubled to just under 1900 at Emerald on Thursday.
Test
Leading environmental market investor and project developer, GreenCollar, has been confirmed as the official presenting partner for the 'NRM in the Rangelands Conference - Shaping our Future', to be held in Longreach in early October.
Test