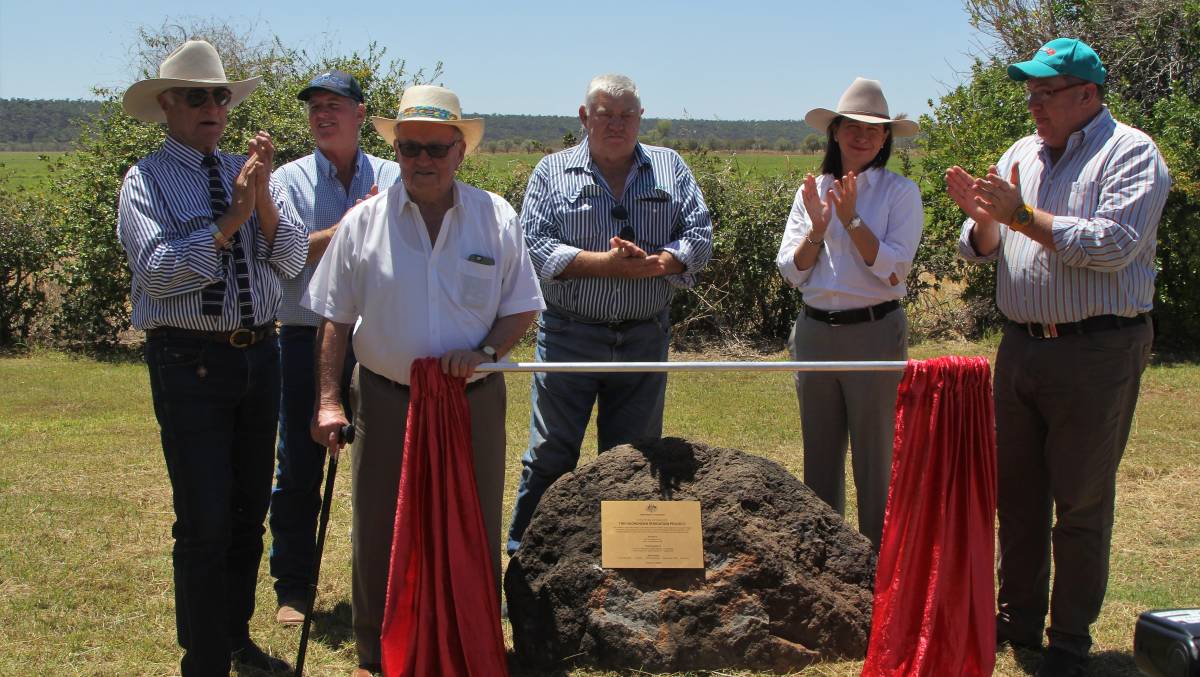 The written promise made by Prime Minister Scott Morrison to Kennedy MP Bob Katter for $180 million for the Hughenden Irrigation Project was commemorated in stone on the site of the proposed dam on Tuesday.

While the state government's approval is so far untested, supporters of the multi-million dollar Hughenden Irrigation Project were on Monday hailing it as a platform for the Morrison government to help north west Queensland and beyond achieve full prosperity.

Three levels of politics gathered at the site of the proposed dam to Hughenden's north west to unveil a plaque commemorating the written promise made by Prime Minister Scott Morrison to Kennedy MP Bob Katter a year ago for $180 million for the Hughenden Irrigation Project.

The scale of such a landmark announcement was reflected in the speeches on the day, emphasising the game-changing opportunity brought about by the Prime Minister's support for the drought-busting idea.

HIPCo chairman Shane McCarthy said the project had been around for as long as he could remember, in some form or another.

"One change for the better is the platform this project gives the Morrison government to achieve full prosperity in the north," he said.

Both drought-relieving and depression-era income creating properties were raised by the scheme's greatest champion Bob Katter, who said he had asked the Prime Minister when governments would come to the conclusion that they had the means to implement a drought-breaking solution before them.

The project plans to harvest 86,000 megalitres of the 260,000ML that flows past the site beside the Flinders River, or one-twentieth of the river catchment, providing water for 8000ha of mosaic farms situated alongside.

Proponents say it will mean nearly a hundred new farms and families living on them, for the region. Jeff and Jenny Reid already irrigate feed for cattle at the proposed HIPCo site, and say they have demonstrated its viability. "This isn't rocket science," Jeff said.

The unknown part of the equation is the extent of the state government's support for the irrigation plan, which would be essential for it to go ahead.

Assistant freight transport minister Scott Buchholz, representing the deputy Prime Minister and infrastructure and regional development minister Michael McCormack, while telling those present he was confident the unprecedented groundswell of support would see the project go ahead, reminded them the federal government "had little carriage of the project".

That was emphasised by Senator Susan McDonald addressing the media at the Hughenden site, noting the project's feasibility study was subject to state government regulations, which oversees water and vegetation.

State agriculture department sources said minister Mark Furner had been invited to the function but had been unable to attend.

HIPCo board member Jeff Reid said they had found state government representatives quite positive to their plans the last time they'd met but North Queensland Livestock Recovery Agency head Shane Stone said they would have to be very active to get what they wanted.

The former Northern Territory chief minister said they shouldn't believe any change of rhetoric meant that departmental people were agreeing with anything put forward.

Mr Katter said that if the state government stopped the project from overcoming drought, HIPCo might lose the legal battle but they'd win the political one.

"We'll take your cattle and sheep from down south up here in the bad times and you can take them back in the good times," he said. "At long last we've come to grips with drought in this country."

He also questioned the various processes put in front of the committee by the federal government.

A $2m feasibility study is currently underway, which, if boxes were ticked, will lead to a comprehensive business case at a cost of $5m, where partners could be identified.

While Mr Buchholz said the hurdles in front of the project were to make sure it was viable and met all the approvals, Mr Katter said the project could not afford process.

He said the government should take the phrase 'to govern' literally to waive processes such as feasibility studies and business plans, which he saw as holding things up and eating up allocated funds.

Mr Buchholz said the political appetite for the project was not in question.

"We will be standing there at the other end of that process," he said.

Because the project remains at feasibility study stage, no requests have yet been before the state government.