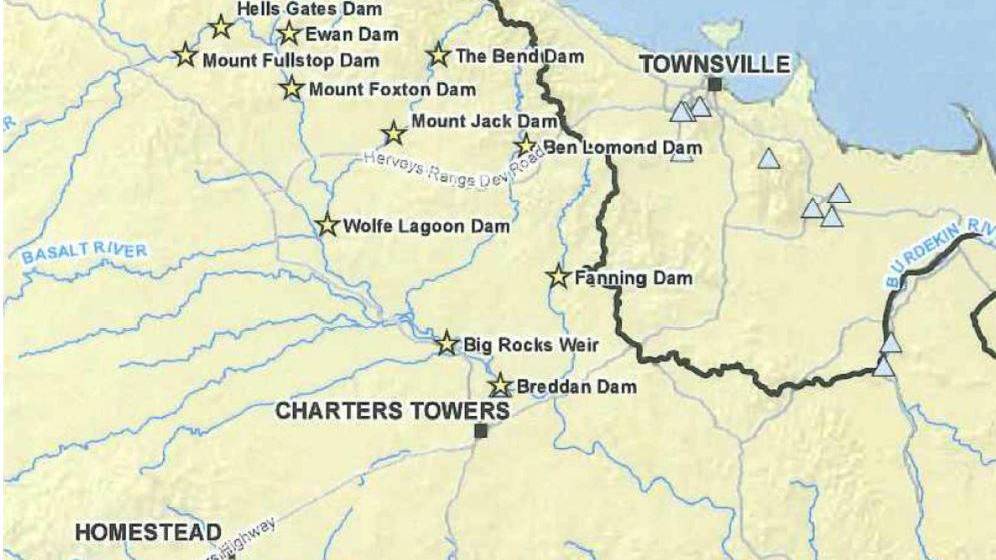 A map of proposed water infrastructure projects around North Queensland.

The Flinders Shire Council is “pretty excited” by the federal government’s plans to tip $180 million into the Hughenden Irrigation Scheme.

On Thursday Prime Minister Scott Morrison committed $54 million for work on the Hells Gate dam and $180 million towards the Hughenden project.

“We're obviously pretty excited by having irrigation on the Flinders River,” she said.

“The first talk of trying to build a dam was in 1985. Five sites have been investigated since then.”

The funding was detailed in a letter from Mr Morrison to Kennedy MP Bob Katter.

With the federal government in a precarious position following the Wentworth by-election loss, Mr Katter has demanded more funding for North Queensland in exchange for his support on the cross benches.

“Wentworth has gone the other way and the government needs Bob's vote - it's politics 101,” Councillor McNamara said.

“If the Flinders Shire is to be a beneficiary, I'm happy,” she added.

Cr McNamara said state government approvals would be needed before anything got off the ground.

“I'd expect the state government to go through the necessary processes.

“It's not a Flinders Shire Council initiative but it has council support.”

Natural Resources Minister Dr Anthony Lynham said there were some lingering questions about how the federal government’s cash would be spent.

“We are just not sure what is the next step, or what is expected of any Queensland government or statutory bodies."

Dr Lynham said it was unusual for such a significant announcement to be made without detailed business cases.

A feasibility study into the construction of Hells Gate released has deemed the $5.35 billion irrigated agriculture and power project to be viable.

“The Palaszczuk government has already funded an initial investigation into the Hughenden Irrigation Project with the Flinders Shire Council and an initial business case of the $5.35 billion Hells Gate project has identified significant challenges," Dr Lynham said.

While the state government sought more information on the project, others have been celebrating it as an unmitigated win for North Queensland.

“Water security, especially for agriculture, will be a major issue into the future,” Cr Schmidt said.

“Phase One of the Hells Gates project would see the realisation of our community’s single most important infrastructure project – Big Rocks Weir."

“Given that early and continuing association with Big Rocks, I am thrilled that we are now at a stage where funding is becoming available.”