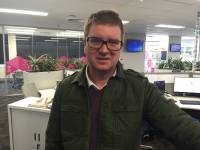 Gregor Heard is Fairfax Ag Media's national grains industry reporter, based in Horsham, Victoria. He has a wealth of knowledge surrounding the cropping sector through his ten years in the role. Prior to that he was with the Fairfax network as a reporter with Stock & Land. Some of the major issues he has reported on during his time with the company include the deregulation of the export wheat market, the introduction of genetically modified crops and the fight to protect growers better from grain trader insolvencies. Still involved with the family farm he is passionate about rural Australia and its people and hopes to use his role to act as an advocate for those involved in the grain sector. Away from work, he is a keen traveller, having spent his long service leave last year in Spain learning the language.

Funding from the federal government will help run a series of grains industry market access programs.
Test 1 week
The Mallee Machinery Field Days is off for another year.
Test 1 week
GPA says that with the focus on farm safety this week farmers should look at undertaking some training to prevent workplace accidents.
Test 1 week, 2 days
S&W's Studenica vetch has the potential to become a staple for vetch producers across the country.
Test 1 week, 3 days
The Bureau has formally declared an Indian Ocean Dipole negative event, good news for those who want more rain over spring.
Test 1 week, 5 days
The ACCC has denied Viterra's applications to have its Port Lincoln and Thevenard ports exempt from the port access code.
Test 1 week, 6 days
The world's largest exporter of fresh pork, Germany, has confirmed cases of African swine fever in its domestic herd for the first time.
Test 1 week, 6 days
Grain Producers Australia is working on a two-pronged attack to combat harvest worker shortages, looking at the short and long term options.
Test 1 week, 6 days
While Australian croppers are confident of a good year elsewhere crop prospects are rapidly declining due to either excess heat or floods.
Test 1 week, 6 days
Farming on the globe's driest continent all but the wettest of winters is unlikely to dent yield projections analysts say.
Test 1 week, 6 days
← Previous