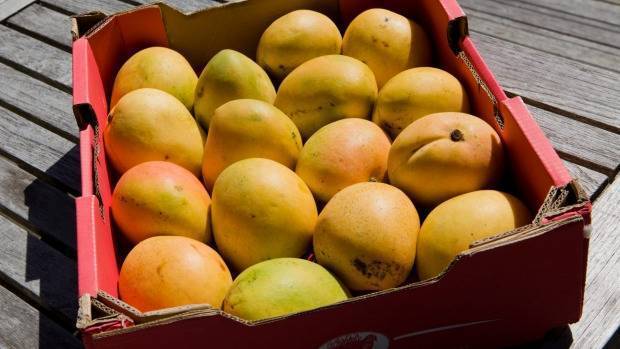 North Queensland's mango season is fast approaching and growers are preparing for the 21/22 harvest.

North Queensland's mango season is set to ramp up in the next couple of weeks as many growers prepare to harvest the popular lunchbox favourite.

According to Australian Mango Industry Association chief executive officer Brett Kelly, numbers will be similar, if not up on last year's total crop.

"The general overview that I'm getting from growers is that last year we were down in total volume - we did about 7.2 million trays. This year we'll be up, but not significantly, although it's still a little bit early to tell how that will go," he said.

"The flowering and harvest all seems to be looking okay. In some areas a little bit better, some areas a bit down depending on variety and region.

"But at this point now, the season is looking okay and demand is very strong."

Mr Kelly said it was still a bit early to determine what prices would be like this season.

"Because of the seasonality, you've got to take the whole season and do a weighted average to accommodate the up and down, peaks and troughs of supply and demand," he said.

"Weather has been all over the place so we've had a very mixed flowering," he said.

"Some trees have even had three flowerings, so you've got big fruit, medium sized fruit and then tiny fruit setting now. It's been all over the place."

Mr Nardi has 24,000 trees planted on his 237ha farm, where he produces three different varieties of Mango; R2E2, Kensington Pride, and Keitt.

"We need cold weather at the correct time to put trees into flowering mode and that varied quite a bit this year. Last year was a bit unusual as well," he said.

"I think we will be down between 20-30pc on our Kensington Prides, down similar numbers on our Keitts, but our R2E2 crop will be similar in volume to last year.

"That's a very individual thing, grower by grower. There's no consistency this year, every grower is very different."

Mr Nardi said last year their fruit crops had been impacted by frost and hail.

"Frost affected a lot of crop yield throughout the region last year, whereas this year we didn't have those frost events, we just had the temperature ranges that varied quite substantially and it just messed up the flowering a little bit," he said.

"It'd be nice to have a good consistent season for a change because we've had two years of a lot of variation."

Mr Nardi was another grower who said crops varied quite a bit this year, with some flowering earlier, some later and for some not at all.

"The Kensington Pride for some growers who got that early flowering are probably two weeks ahead of last year, whereas the later flowering and the Keitt crop probably look a little later than last year," he said.

"We're about three weeks off our Kensington Prides, and that's probably two weeks ahead of last year at this point.

"R2E2 looks similar timing for us but the Keitt usually start in late January/ early February and it's really hard to see when that's going to fall. I think they'll come through okay, but it's a bit early to tell how that timing is going to work at this stage."

With regards to mango prices, Mr Nardi said he was unsure just yet what prices he will receive.

"I think it's a little bit early to say what prices we'll get just yet but it looks like we're going to clash a bit with the Burdekin region, with their Kensington Pride crop," he said.

"In saying that, the crop numbers are down substantially on some varieties - not all - so that could have an impact.

"Overall I still think it will be a good season, and fruit quality will be great."