Check out the headlines from the North Queensland Register in October 1977. 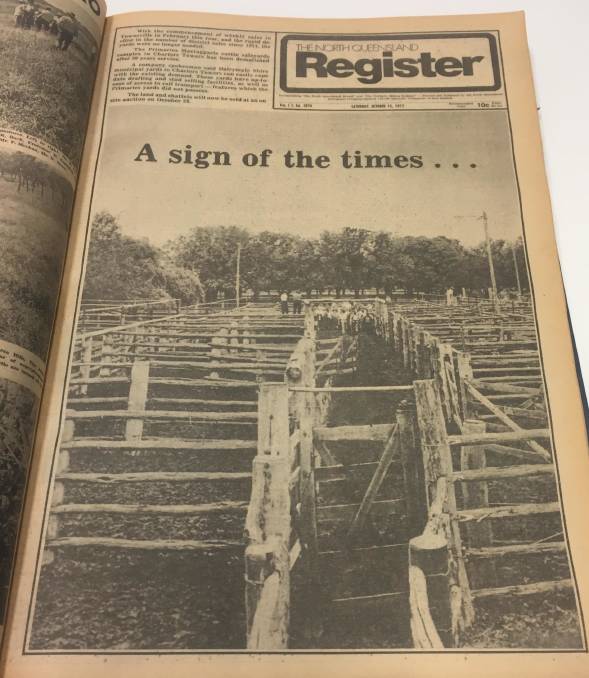 The front page at the time was on the Charters Towers saleyards.

Front page news of the North Queensland Register was the demolition of the Primaries Mactaggarts Charters Towers cattle yards after 20 years of service.

With weekly sales commencing in Townsville in February of that year and the rapid decline in district sales since 1974, the yards were no longer needed.

Those yards had up-to-date drafting and stud selling facilities, as well as ease of access to rail transport.

The land and chattels were set to be sold at an auction.

Speculation and apprehension was growing in the district concerning the acquisition of the 1977 season's crop and the likely effect an International Sugar Agreement might have on the 1978 season.

The secretary of the Mackay District Canegrowers Executive, Mr J A Dixon, said barring the intervention of adverse weather, there would be little cane left unharvested in the Mackay district as at the termination of the 1977 crushing season.

He said it would appear Australian production overall in 1978 would need to be cut by something of the order of 300,000 tonnes 94 n.t sugar.

"This could affect the central district, having a record of sustained over-peak production which has made considerable shortfalls and facilitated growth outlets for Australia's sugar production," he said.

Hughenden district grazier John Barr was elected the chairman of the sheep and wool committee of the United Graziers Association. Mr Barr was married with three children and lived at Barenya, 100 kilometres for Hughenden.

A photograph of a small spotted dog appeared in the paper asking readers, have you seen her?

The eight pound, eight inch high dog called Sukoshi was a rare Japanese breed and was lost in the Cloncurry area in late September after the trailer she was travelling in was involved in an accident.

Sukoshi and her New Zealand mate were the only two of their kind north of Brisbane and a $450 reward was being offered.

Also read: Looking back on NQR headlines from August 20, 1977