Do you remember when the Townsville Bull and Female sale was still being held? 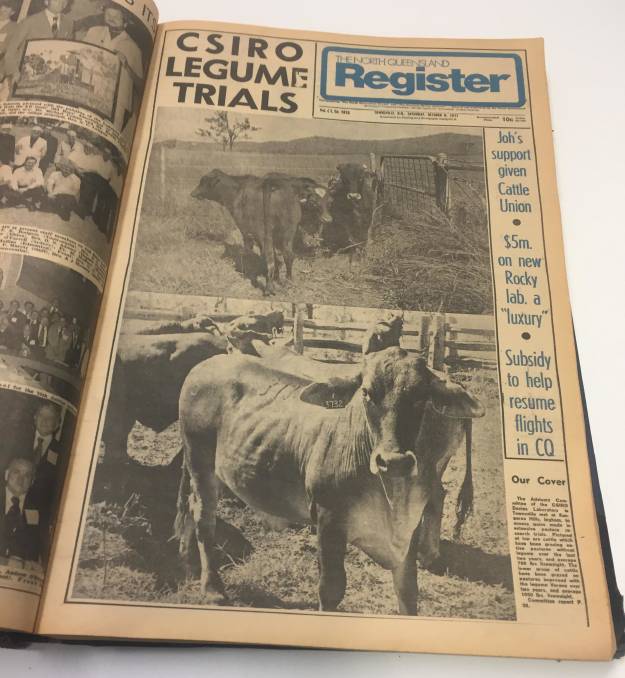 The front page of the paper that week in October.

The advisory committee of the CSIRO Davies Lab in Townsville met at Kangaroo Hills, Ingham, to assess gains made in extensive pasture research trials.

A photograph on the front page (left) featured cattle that had been grazing native pastures without legume for two years and averaged 750lbs (340kg) liveweight.

Another image shows cattle that had been grazed on improved pastures with legume for that time period and average 1050lbs (476kg).

During a meeting with the Parliamentary Standing Committee on Public Works last week he told them it was "a luxury we can't afford".

"There is no real need to have scientists following the footsteps of cattlemen, providing the scientific reasons for why we are able to solve problems by certain methods," he said.

In a submission to the committee he doubted the usefulness of the CSIRO's parasitic research program.

He argued that problems of parasites in cattle could be solved more effectively by efficient stock management than academic research.

The Australian Meat Board recently sent a delegation to Japan to discuss import arrangements with the Livestock Industry Promotion Corporation.

"In the light of these discussions the board is now considering what steps it might recommend to achieve higher prices," the minister said.

The paper also featured an advertisement for the upcoming Townsville Bull and Female sale on October 24 at the showgrounds.

Also read: Looking back on headlines of NQR on October 1, 1977