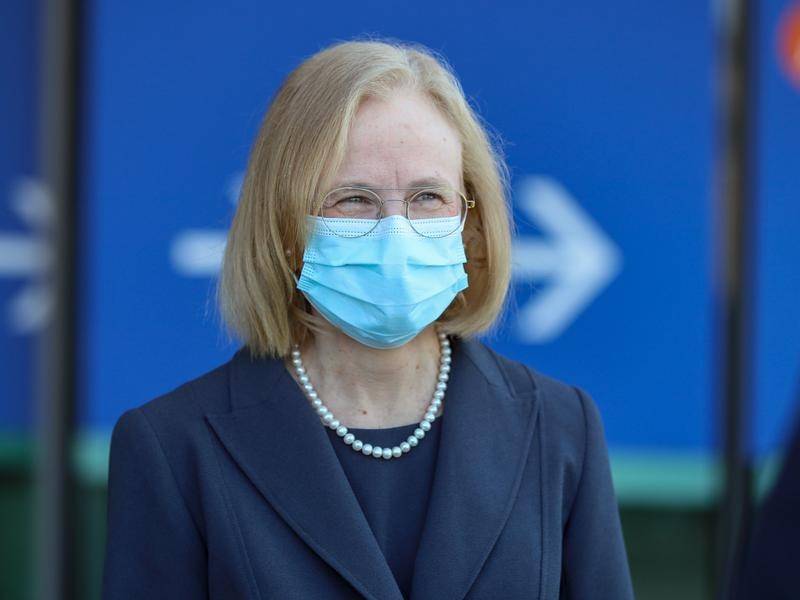 Chief Health Officer Jeannette Young is set to give more details about a new COVID-19 case.

A man in his 30s has tested positive to COVID-19 in Queensland.

An aviation industry worker has tested positive for COVID-19 in Queensland, sparking a public health alert for sites in Brisbane.

"The man in his 30s works in the aviation industry, with no recent history of overseas or interstate travel," Queensland Health said in a statement late on Monday.

The source of his case is being investigated and it will be reported in Tuesday's COVID-19 data.

A public health alert has been issued for exposure sites including a McDonald's in Albany Creek, a childcare centre in Eatons Hill and stores in Rocklea and Aspley.

The case comes after Queensland earlier reported zero new cases of COVID-19 for Monday and the chief health officer said people should "prepare and hope" for the state's borders to reopen in time for Christmas.

But Jeannette Young could not say whether reaching coverage of 80 per cent of eligible Queenslanders fully vaccinated against COVID-19 will trigger an automatic reopening of the state's borders before December 25.

The state borders have been closed to most of NSW since July 21, to Greater Sydney since June 22, regional Victoria since July 17 and Melbourne since May 28.

Hundreds of Queensland residents and people trying to move to the region have been stuck in limbo interstate for months.

The Queensland government has consistently side-stepped questions about whether the borders will reopen to Victoria and NSW before Christmas.

"Of course, yes, we should all prepare and hope and get everyone vaccinated," she told reporters on Monday.

"That's the most important thing business can do - to be out there saying, 'Just get vaccinated', because the more people who are vaccinated, the more likely we can remove those last remaining restrictions."

Borders are not specifically mentioned under the national reopening plan, however some states have committed to quarantine-free travel for fully vaccinated people once coverage reaches 80 per cent.

Queensland had given 63.8 per cent of eligible residents at least one dose of a vaccine by Saturday, with 44.9 per cent fully vaccinated.

Dr Young said vaccination coverage was not the only thing to consider when making a decision on state borders.

The state has stressed Doherty Institute modelling points out that low virus case numbers and adequate testing, tracing, isolation and quarantine measures are needed to ensure hospitals are not overwhelmed when the country reopens.

"It depends on the situation, it's not a simple straightforward process," Dr Young said.

"You can't just pick something, and then say something else is going to happen, you've got all of the issues, it's not a simplistic thing.

"It would be wonderful to be able to know we've got to 80 per cent (vaccine coverage) and something will happen, unfortunately it's just not that straightforward."

There are 13 active cases in the state.