The CAP Droughtmasters sale saw 60 bulls sold for an average of $7960.

Vendor John Atkinson summed up the 35th annual CAP Droughtmaster sale as a "buyers market" at Gracemere on Thursday, as the spring sale once again saw a line-up of ready to work, commercially-focused bulls sell to new and long-standing clients.

Mr Atkinson, Glenavon Droughtmasters, Yaamba, along with Karen and Duncan Geddes, CMC stud, Springsure, collectively sold the 60 bulls drafted for the sale to return a 100 per cent clearance and average $7960.

This year's result saw a slight decrease from the 2020 sale average, which Mr Atkinson attributed to the current market conditions.

Top dollars for the sale came late in the day with the 19-month-old herd bull Glenavon 4081 (PP) sold for $30,000 to return buyers Ken and Kerry McKenzie, Yaralla Droughtmasters, Bluff.

The young bull was described as a bull with a beautiful head, who attracted the eye of many buyers leading into the sale. 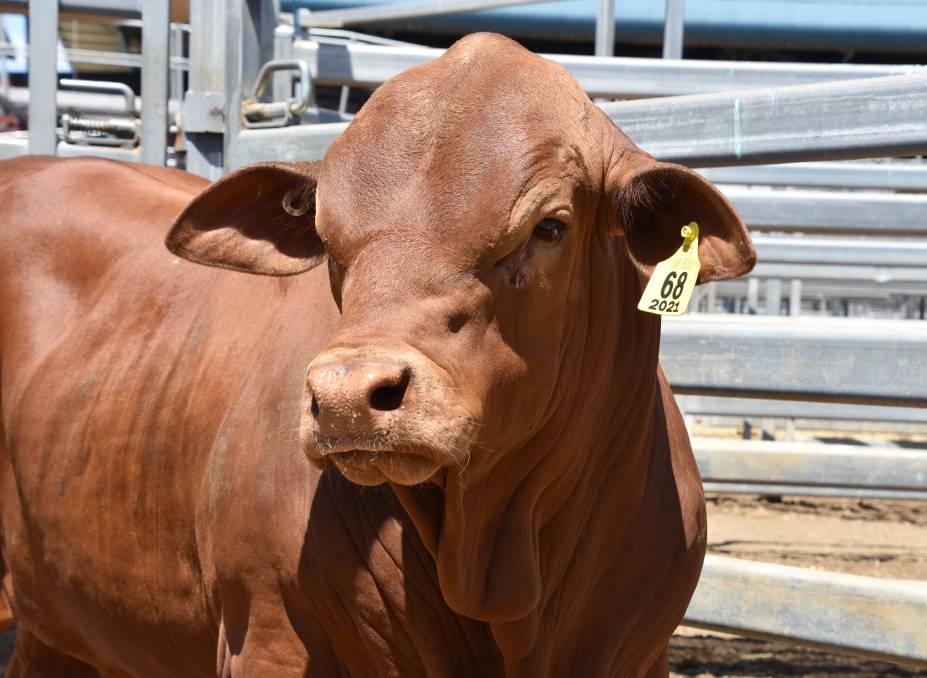 Sired by Sugerland Jimmy and out of a Glenavon stud cow, the sire prospect stepped into the sale arena weighing 640 kilograms, with a scrotal circumference of 35cm, 127 square centimetre eye muscle area and P8 and rib measurements of 7mm and 5mm.

Kerry McKenzie said the bull caught their eye for his sire appeal and "a nice little something there that grabbed our attention".

"We were chasing that strong head and good through the back."

The new addition to the Yaralla stud will go out to Bluff initially to be used over a selection of heifers.

Xneo, who is sired by Christmas Creek 1521 (P) and out of dam Glenavon 2618 (P), was added to the line-up of six bulls purchased on the day by Brett Christie, TopX Central Queensland, on behalf of 8PK Cattle Company.

Mr Christie said the Glenavon bulls were recognised for their longevity.

"They last in the herd for 10 years and you kill them in age," he said.

"It was a bull buyers market today, with extremely good value," Mr Christie went on to say. Mr Christie, who has been buying Glenavon bulls for several years, was also buying on behalf of several other bulk buyers.

These included Coobyanger, Clermont, who placed an order for five bulls to average $9200, as well as Kerry O'Sullivan, Cherwell Rural Investments, Clermont, purchasing five for an average of $5000.

Long-standing repeat buyers Bill and Maxine Cragg, Mourindilla, Dingo, were in attendance for another year and loyally added to their herd another six bulls to average $5333.