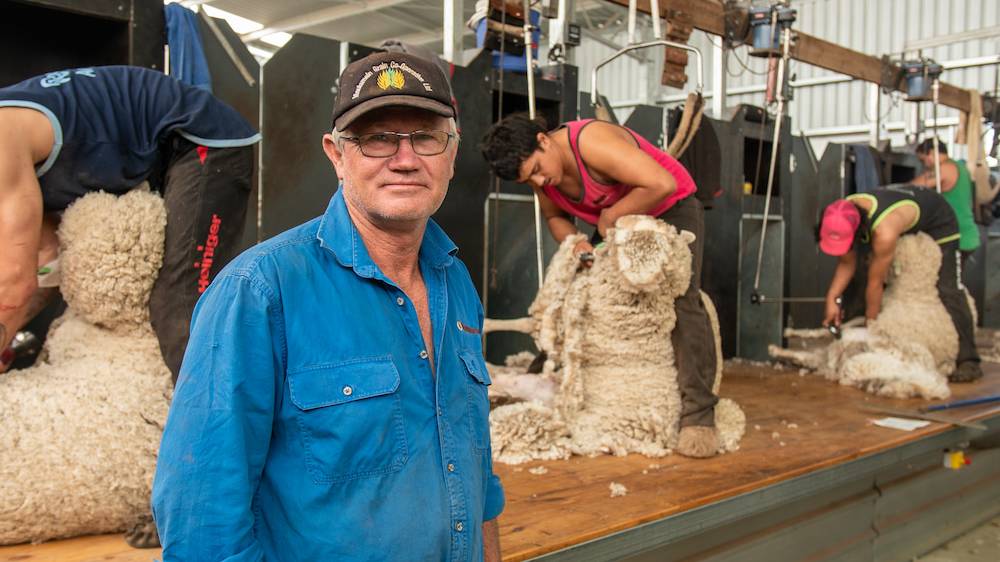 New infrastructure has enabled the Kaylock family to make the most of the latest technology and animal husbandry practices as part of their proactive approach to sheep management.

The Kaylock family are preparing for the future.

Technology is helping them boost productivity within their Merino flock, as they use data to make management decisions based on individual animals.

Their breeding goals are tailored towards improving their flocks' wool cut and fibre diameter, and lambing percentage, while reducing the time it takes lambs to reach market weight.

Embracing industry tools such as genomics, Australian Sheep Breeding Values (ASBVS) and electronic identification (eID), the farming family from Mallan near Moulamein in NSW is looking at what's possible for their sheep and wool business.

And they are excited.

New infrastructure to enable them to make the most of the latest technology and animal husbandry practices has also been a part of their proactive approach to sheep management.

So, it's no surprise they also built a new Entegra shearing shed.

"The shed makes life so much easier; we can keep sheep separate once we've organised them into the categories we want them to be in," Peter explained.

"Years ago, we'd have blasted fences falling over and gates opening, we'd be working in the heat, the dust and flies and we couldn't use technology - as in computers - because it just wouldn't work. The working conditions are just so much easier now."

The Kaylock family - Peter and his wife Elizabeth and their daughter Laura, and Peter's sister and brother-in-law Helen and Sean Collins - run a cropping, rice, sheep, and wool operation in the NSW Riverina.

Peter said his daughter is leading their new era of sheep management, since she returned from studying agriculture at university.

Data and visual assessments will work together to underpin a lot of management decisions, with the family aiming to boost the average flock production by breeding from their best animals.

"We already have some impressive animals as a result of Sean's careful selection of rams and visual assessments we already undertake in our flock," Laura said.

"That's still a pretty big part of what we do. It's now looking for those 'one percenters' to maximise our production. We use a lot of precision ag tools and scientific data in our cropping program, but we don't tend to do as much in the sheep, so we thought there was an opportunity there."

The family has worked closely with wool consultant Michael Baker of Nutrien Ag Echuca since 2017, to produce a productive, dual-purpose flock. Laura said he has been enthusiastic about the addition of flock data collection as this would assist his classing process.

The Kaylocks run about 1600 Merino ewes and sell 800 to 1000 wethers annually to a meat processor. Their wool cut ranges from 6-13kg per sheep and is 21 micron.

Fleece sizes have increased substantially over the years thanks to their larger-framed dual-purpose sheep.

Laura doesn't anticipate extra data and individual sheep information would add to the size of fleeces, rather she expects to lift productivity of the entire flock.

"Imagine a bell curve, it's tightening that curve and making sure you don't have as many outliers so that on average, you're getting a better wool cut because each individual animal is performing," she said.

"We will be identifying the ones that aren't really meeting our objectives."

Laura said the stud's recent inclusion of ASBVS is assisting the Kaylocks assess potential progeny weaning weights which correlate with better survival and faster animal turnaround for the meat market. 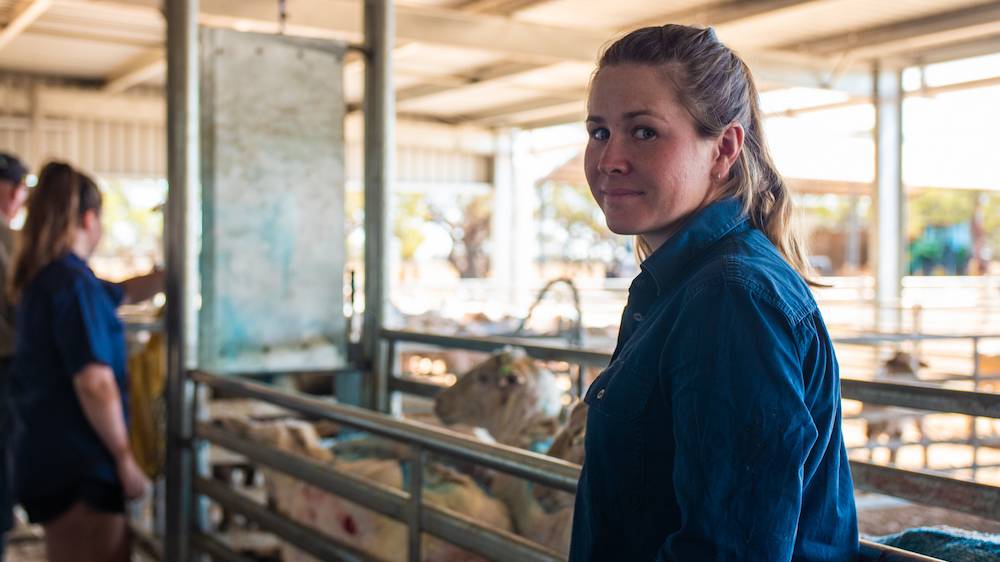 Getting results: Laura Kaylock says that the fleece sizes have increased substantially due to a lift in productivity of their flock. Picture: Supplied

It's only early days in the Kaylocks move towards bolstering their on-farm dataset and Laura said most work - to date - involved accurately understanding their current situation.

Moses and Son consultant Lexi Cesnik has been helping the Kaylock family make the best decisions with their data.

"I really like analysing things; it gives you more of an unbiased approach when you're farming," Laura said. "It's something that's here to stay and over time we'll probably expand on it. It's just another tool, there's so many tools out there for different enterprises and it is always changing."

Wool testing is nothing new for the Kaylocks. They used to conduct machine in-shed testing, but now they are taking a slightly different approach to generate data from each sheep.

A sample from every fleece is sent away with the sheep's eID and this information is combined with the flock's wool test.

"We can see which sheep cut 23 micron and or cut 4kg of wool and have heavy discolouring or vegetable matter," Peter said. "We can actually cull that animal, so it doesn't come back next year."

Fleece sampling is made easier thanks to the additional space in the new shearing shed.

"We can work with our wool a lot more than we did before," Peter said.

The new shed also has up to 10 wool bins - in the old shed there was only four or five.

Researching the shed design, the Kaylocks wanted to incorporate the best animal welfare practices in the yards - such as ease of movement - while ensuring a good workspace for shed staff.

The shed design also included space to install a three-way auto draft in the future - another labour-saving tool.

The five-stand raised board shed has a sloping board from the holding yards down towards the shearers to make it easier to haul sheep from pens.

This feature has been welcome, according to Peter, as some ewes can be up to 80kg liveweight.

Peter said the decision to stay with the conventional, raised-board layout provided the best use of space in the shed and ensured wool handling remained as simple as possible. 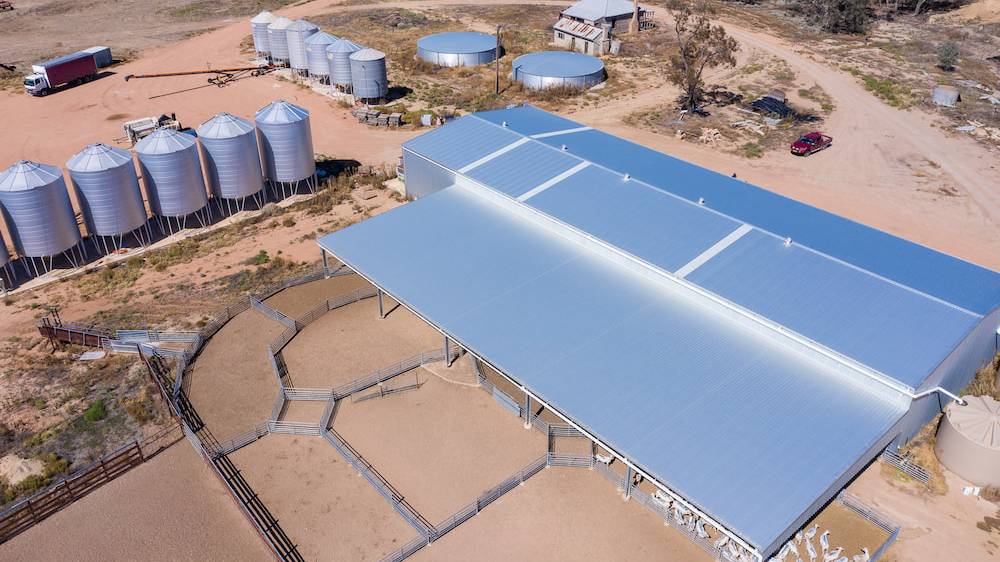 Shearing in February - the hottest month of the year in the NSW Riverina - the new facilities have been embraced by shed staff.

"They certainly appreciate the shed - it's roomy, flows well, works well and it's a bit cooler because we can open it up and get the air to flow through," Peter said.

"It is a usable shed for shearers, it's not like the old shed where we couldn't get any airflow through it, the board was up and down...it was just a nightmare."

Describing the new shed as the "Rolls Royce" version compared to what they had, Peter said the shed never vibrates in the wind and all the moving parts work well.

Outside, an annexe - almost as large as the shearing shed itself - covers yard and a raised race.

"It's great for classing and for assessing and handling sheep at your height," Peter said. "It's the simple things we didn't have before."

A feedlot with capacity of 2500 is attached to the back of the shearing shed for ease of management and proximity to the yards for regular weighing.

This area was used for containment feeding during the drought but primarily serves as a lamb fattening feedlot.

Last year some Kaylock lambs achieved the season's target sale liveweight - about 50kg - in less than half the traditional time frame. This was the best result they'd ever recorded with different year's varying with seasonal conditions, according to Peter.

He said lambs last year entered the feedlot at about 45kg liveweight and four weeks later half were turned-off at 50-55kg. Previously it had taken up to 12 weeks for the lambs to reach sale weight.

The remaining lambs stayed in the feedlot for a total of eight weeks.

While this result followed "not a bad year", the Kaylocks have a strict fattening ration and supplement all sheep with a specially-formulated lick block.

Their fattening ration includes barley, some barley straw and 20 per cent protein - mostly peas - all sourced from their own property.

Feeding grain back through the feedlot is one way the family diversifies their cropping operation. Another is selling cleaned grain as bird feed through a separate business.

Looking ahead, the family is excited about what new technology, infrastructure and management techniques could mean for their sheep and wool business.

Driving productivity will be the key to profitability and achieving their business goals.

"If you can cut another kilogram more than you did before, wool is robust at the moment price wise, and it doesn't cost anymore," Peter said.

"Now we have that capacity to measure sheep traits, that's changed everything. You've seen what they've done in dairy and it's happening more and more in beef. There's no reason sheep shouldn't be part of it."

The story Making decisions with data to boost farm productivity first appeared on The Land.