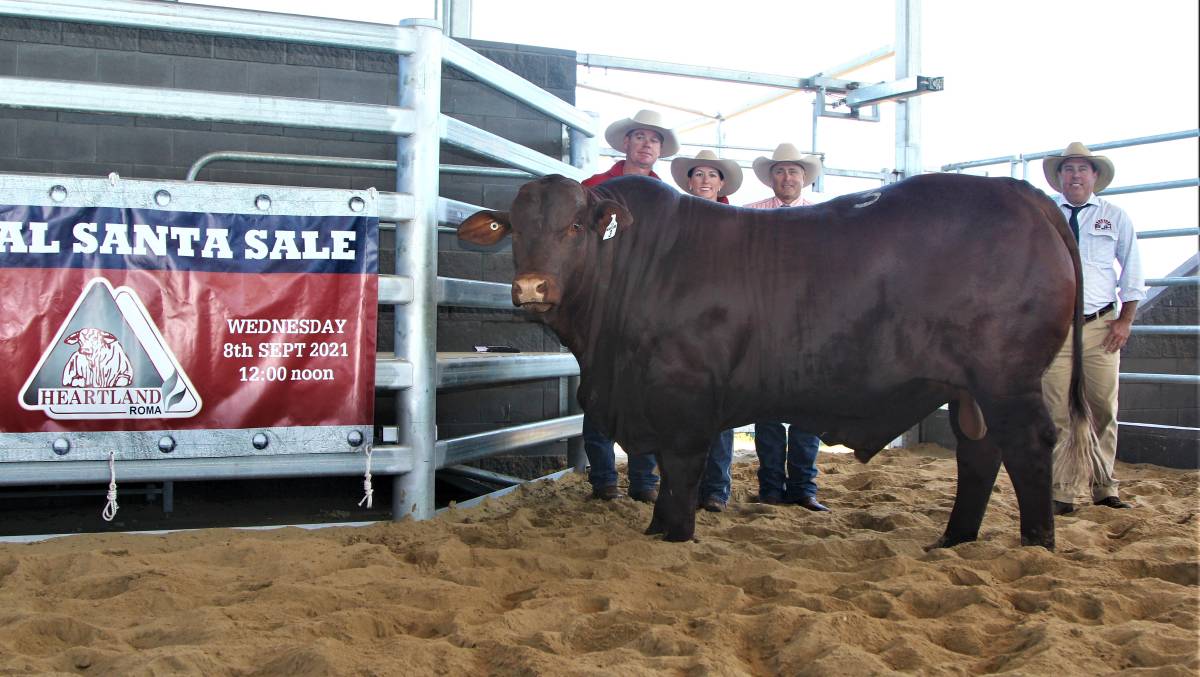 Wandoan Santa Gertrudis breeders Daniel and Kasey Phillips received the biggest boost to their breeding career to date at the Heartland Santa Gertrudis bull sale at Roma on Wednesday when Murgona Nightcap (P) was sold for $105,000.

Wandoan Santa Gertrudis breeders Daniel and Kasey Phillips received the biggest boost to their breeding career to date at the Heartland Santa Gertrudis bull sale at Roma on Wednesday when Murgona Nightcap (P) was sold for $105,000.

Speaking after the sale, a delighted Kasey Phillips said that price had more than doubled their expectations, which had risen as requests for photographs and videos had come in from prospective buyers.

"We exhibited him at the Wandoan Show and at Beef, and had plans to take him to the Ekka until that was called off," she said. "His dam is a standout who we think a lot of."

Yugilbar general manager Rob Sinnamon said Nightcap's wow factor first caught their eye in the catalogue, and it was reinforced by his phenotype, structural correctness and breed characteristics.

"All combined to make us want to chase him to complement the breeding program at Yugilbar," he said. "His outcross genetics were important to us too."

Nightcap weighed 968kg, had an average daily weight gain of 1.31kg, P8 and rib fat measurements of 13 and 10mm, an eye muscle area of 141 square centimetres, and intramuscular fat of 5.4pc.

The highest price received by the Phillips family prior to Wednesday's sale was $32,000, recorded at the 2019 Heartland sale.

The sale of Nightcap helped boost their sale average to an impressive $20,466 for 15 bulls.

Summarising the sale, Santa Gertrudis Association general manager Chris Todd said that while the commercial market was very strong, buyers were being very selective about their bull purchases.

"I think that's what we saw here today - the sale was hard in places," he said.