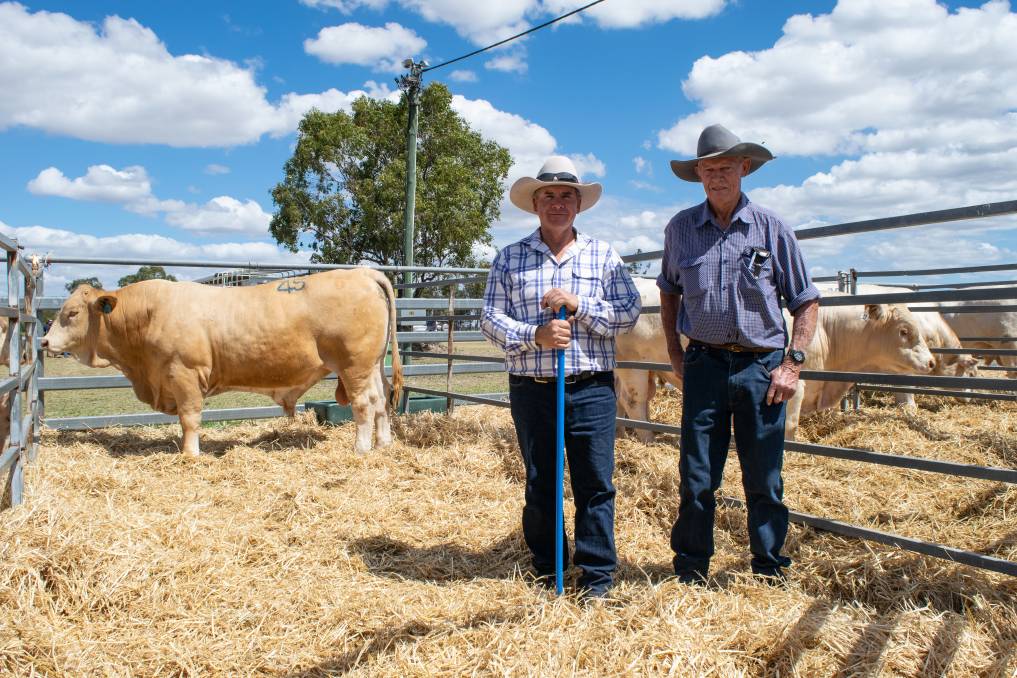 'Bulls made to travel and ready to work' is what could be heard from the grandstand as stud principal Stephen Kajewski made his opening address at the 16th annual Bettafield Charolais and Charbray bull sale.

Held at the Emerald Ag-Grow sale complex last Friday, the sale saw 30 Charolais bulls and 30 Charbray bulls offered through the ring to achieve a 96 per cent clearance and overall average of $8603.

The sale featured a pool of 93pc polled genetics, with the 30 Charolais bulls kicking the sale off to produce an average of $8196, while the Charbray bulls averaged $8983.

It was Lawrence Hack from Alpha who secured the highest bid for Charbray herd bull, Bettafield Q2 (PS) who topped the entire sale at $20,000.

Sired by Bettafield Jukebox 6KCJ4IE (P) and out of Bettafield YK106 SKBK106, the rising two-year-old bull weighed in at 830 kilograms, with an eye muscle area of 118 square centimetres, P8 and rib fat of 7mm and 6mm respectively, and an intramuscular fat of 5.4 per cent.

With a scrotal circumference of 45cm, Q2 had a semen motility of 80pc.

The young bull had a scrotal circumference of 37cm and a semen motility of 85pc. 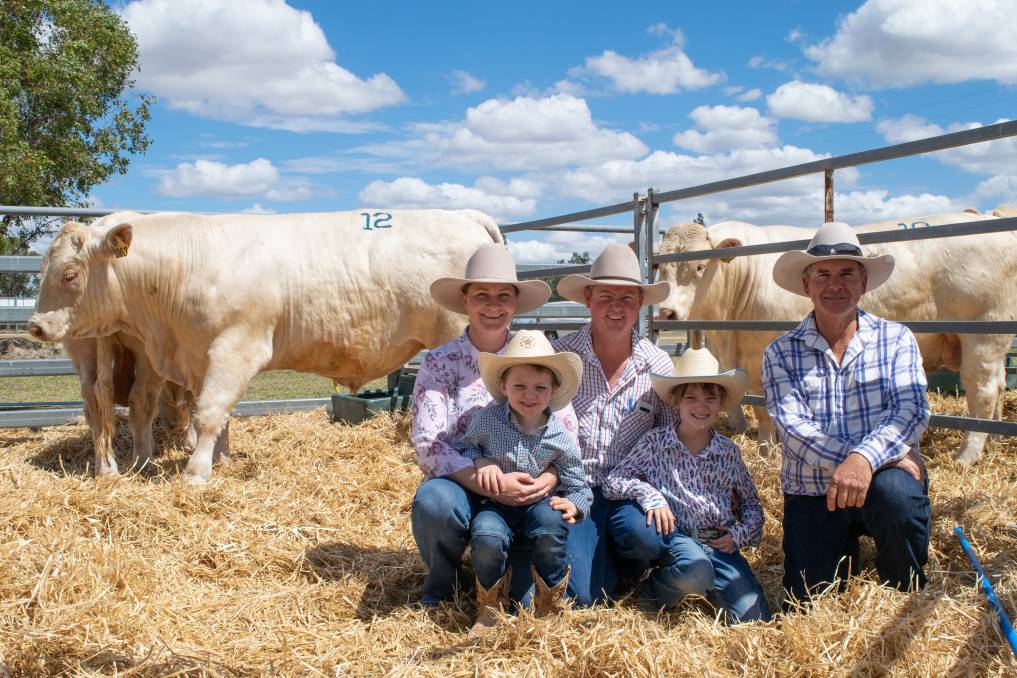 Vendor Stephen Kajewski (right) with volume buyers in Friday's sale, Andrew and Tammy Richardson from Cloncurry with Darcy 7, and Sarah 8.

Mr Hack was a repeat buyer at the Bettafield bull sale, and credited the great line-up of bulls that were on offer.

"I thought it was a very reasonable sale and you've got to congratulate Stephen and his family for producing such lovely cattle," he said.

Mr Hack owns and operates two properties, Prior Park and Rocklea, between the Drummond Range and Belyando River where he utilises the Charolais genetics to improve his herd.

"I like their overall correctness and temperament. I'm always trying to improve my herd," Mr Hack said.

"I keep crossing with a mixed breed - Limousin, Charolais and Droughtmaster - and have been pretty happy with the results of the progeny from that mix." 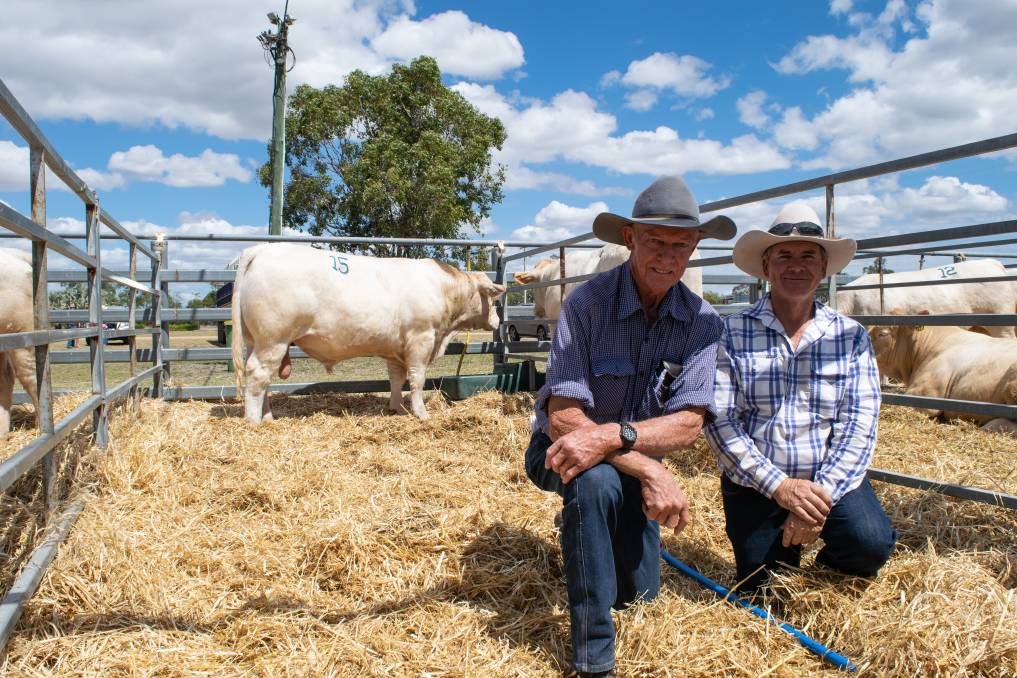 Andrew and Tammy Richardson were among some of the biggest volume buyers in Friday's sale, making the long trip in from Cloncurry to purchase four bulls for an average of $7500.

"We'd never been to a Bettafield sale before, we bought our first two Bettafield bulls last year out of the paddock and were happy with how they've been able to perform in our country," Mr Richardson said.

The Richardsons are based at Cloncurry, but also have a property south west of Winton, where they run predominantly Brahman and Brahman-cross cattle.

"The two bulls we bought last year were paddock bulls and acted as a good trial for us in our harsher country; we wanted to see those cattle perform before we dived right in.

"They're a very good line of cattle, we generally look for a bull with plenty of length, depth, and bone quality. The ones we purchased on Friday will go back to Winton to be put across our Brahman herd."

Vendor Stephen Kajewski was relieved with the sale's result and said it was great to see lots of repeat clients continue to show an interest.

"I'm really thankful we have lots of repeat clients who come back every year and buy our bulls. There were a couple new clients this year and it's great to see them interested as well," he said.

"I think that is our highest top price for both a Charolais and Charbray bull as well."

Mr Kajewski said his bulls are made to travel, with many of his clients from far northern and western districts, where cattle are required to perform in often harsher environments.

"We've got cattle that can survive in a lot of country now, we're talking up into the Gulf and out into the desert country and into the Northern Territory so our cattle do the job," he said.

"Some of these bulls will go 1200-1300 kilometres on a truck now and they have to come off at the other end and be able to perform and go to work. We breed them to get out and get calves on the ground.

"We don't pamper them, they're just run as commercial mobs at home. We treat them like steers, and run them in big mobs right through up until sale season when we start splitting them up." 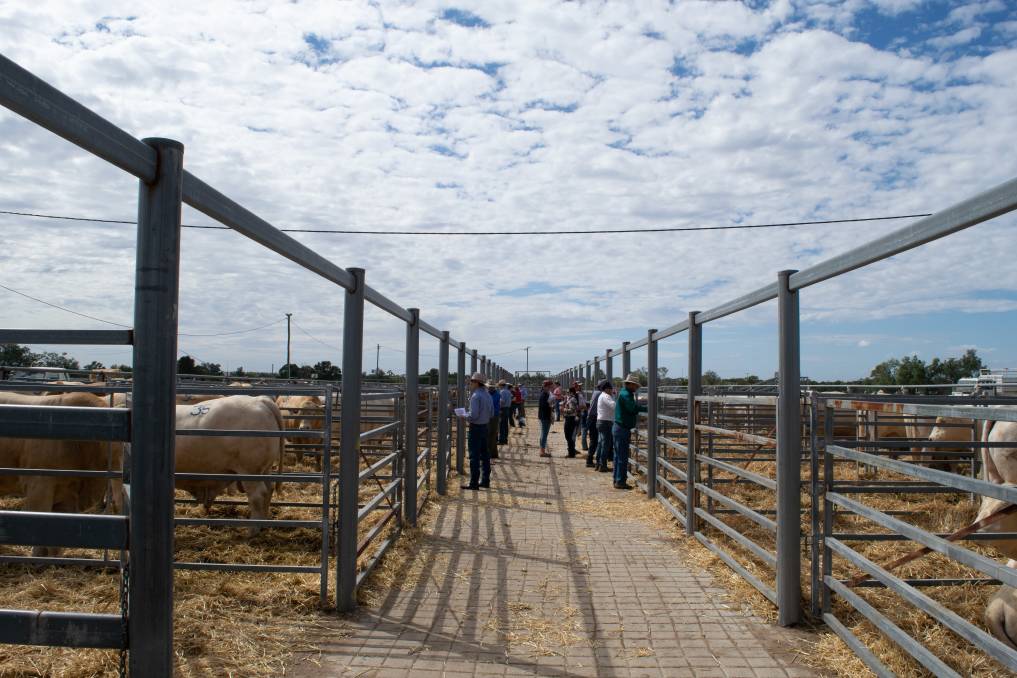 Crediting Mr Hack for topping the sale in both bull categories, Mr Kajewski said he's remained a really good supporter of their cattle.

"He knows what they do for him out there in his country. He breeds some wonderful bullocks out there and he's always after those good bulls to keep his cattle top notch," he said.

The two remaining bulls that did not clear through the ring were sold at the conclusion of the sale to achieve a 100pc clearance rate and an adjusted overall sale average of $8483.

They were purchased by the Richardson family from Cloncurry.