It's been a big year for the Simmental breed.

It's been a big year for the Simmental breed, with record stud and commercial prices, a virtually-judged national show, and the introduction of a second performance recording platform for the breed.

While COVID-19 has impacted major events, breeders have been able to run shows and sales online.

Among the recent highlights for the breed have been exceptional stud sale results.

The strong prices started at the Emerald Ag-Grow Premier Multi-breed Bull Sale on June 25, which was topped by a Simmental bull at $38,000.

Meldon Park Q52 (P), offered by Rodney and Elisabeth Skene, Meldon Park Simmentals, Cecil Plains, was purchased by George and Lorraine Bartolo, Carrinyah, Nebo, and broke the Ag-Grow bull sale record, as well as setting a new breed record for a bull sold in Queensland, eclipsing the previous record set by Lucrana Legend (P), who sold for $32,000 in 2017.

Lucrana stud, based at Texas, had an exceptional 10th sale, with Andrew Moore selling 37 of 42 bulls for an average of $10,743. The sale also reached a record high of $35,000 paid by Valley Creek Simmentals, Bowral, NSW, for yearling bull Lucrana Radar.

Those results followed a successful online show and sale, which was judged by internationally renowned cattleman PJ Budler of Global Livestock Solutions, US, who assessed the cattle virtually and released his results on Facebook prior to the sale.

It was the second biggest show win for the school, which runs four Simmental cows.

Both females were sired by Willandra Kingston and exhibited by Tony and Loreen Kitchen, Western Australia. 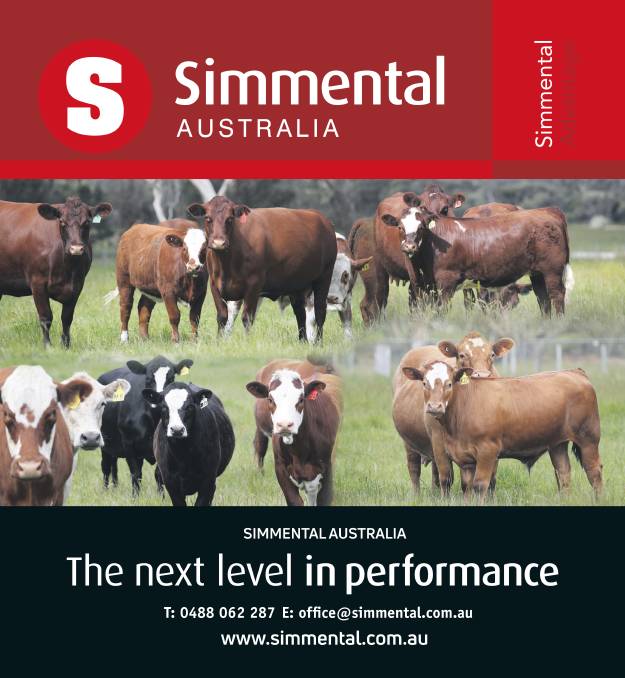 One of the biggest achievements for the breed this year is the inclusion of Australian Simmentals in the International Genetic Solutions multi-breed cattle evaluation, which will be open to stud breeders, along with Breedplan.

"Using the IGS system would give us 34 times the records that we currently have, but the biggest benefit is the ability to put a measurable number on our maternal stayability," Simmental Australia president Stuart Moeck said.

"It's a strong point of the breed and allows Simmental breeders to really evaluate maternal characteristics."

The breed is set to celebrate 50 years in Australia next year, with Simmentals the feature breed at Sydney Royal Easter Show and EKKA.

The society is also planning to relaunch a youth development program which would encourage more young people to work with and breed Simmentals.

"There's definitely going to be area focus on that, whether that's sending people to camps and potential running our own youth camp.

"We're also running a few youth classes at the Sydney show, where we plan have $100,000 in prize money which should encourage our commercial producers and youth members to be involved."

SIMMENTAL breeders have been rewarded for quality with the current cattle market, with the breed recently setting a new commercial record and achieving consistent results at store sales.

Queensland producers have had strong results through sales at Roma, Dalby, Toogoolawah and Biggenden this year.

But the best result came from southern NSW, where the Powell family of Murringo sold PTIC heifers for $4010 a head, setting a new breed record for commercial heifers.

Geoff Powell offered the impressive line of 18 2.5-year-old purebred Wormbete-blood heifers on AuctionsPlus in June, as part of the family's gradual dispersal of its Simmental herd which has 50 years of breeding behind it.

COMMERCIAL producers wanting to increase market opportunities and network with other Simmental breeders are encouraged to become members of Simmental Australia.

The breed society currently has 256 commercial members, as well as the 219 full stud members.

While commercial members don't have voting rights, they're welcome to attend all meetings and functions, executive officer Felicity Reeves said.

Commercial members can also record their herd's performance in Simmental Group Breedplan, despite not being able to register cattle.

The biggest benefit of commercial membership is being able to use the Simbeef trademark when selling cattle, which includes the use of the distinctive yellow Simbeef ear tags to distinguish their cattle.

"It allows them to more effectively market their Simmental-infused cattle, and higher prices often result from use of these tags," Mrs Reeves said.

Commercial members also receive a copy of the society's annual publication, which includes a list of all commercial and stud members.

Commercial breeders will also have the opportunity to compete for up to $100,000 in cash and prizes, as part of the Simmental breed's celebrations at Sydney Royal next year.

The story Simmental Advantage: New records set in a big year for Simmental breed first appeared on The Land.