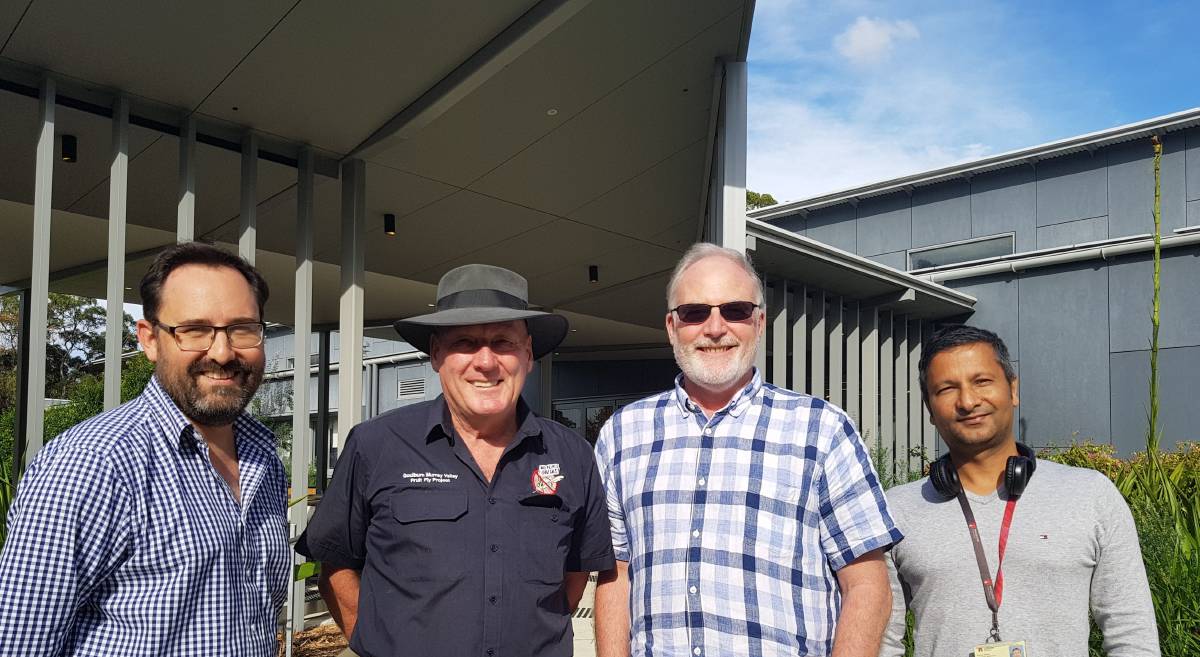 COORDINATORS of a project helping control Queensland fruit fly (Qfly) in Victoria have thanked the volunteers involved for helping the initiative stay alive.

The Goulburn Murray Valley Fruit Fly Project draws on the support and dedication of a broad volunteer base to help lead the charge in protecting the region against Qfly.

More than 3000 volunteers from Lions Clubs, Rotary Clubs, school kids and other community groups have helped grower groups and local government reduce the pest in the Goulburn Murray Valley (GMV).

"We would like to thank the project's many and varied supporters for their contribution to protecting the region from the pest."

Qfly is a serious threat to the GMVs multi-million dollar horticultural industry and the region's economy.

Mr Abberfield said being uninformed and divided in efforts to control fruit fly would mean it would shelter and thrive in unmanaged habitat areas.

"Conversely, if we are informed and united in our efforts to control fruit fly it doesn't have anywhere to hide and numbers can be reduced," he said.

The gross value of horticulture varieties grown in the GMV and which are considered hosts to Qfly is $415 million annually.

The Goulburn Valley is the largest pear producer in the Southern Hemisphere and the Murray Valley is Australia's largest stonefruit producer.

"The program has been highly successful in reducing fruit fly numbers in the GMV over the past four years, to date the program has removed over 100,000 unwanted and unmanaged fruit trees that would otherwise be a breeding ground for fruit fly," Mr Abberfield said.

The multi-award winning program has galvanised the community, industry and government to work together to stop the catastrophic effects of fruit fly and is now recognised as a leader both nationally and internationally.

The program manages and monitors an extensive network of urban/peri-urban/rural and Sterile Fruit Fly Release trapping grids across the GMV to identify and monitor "hot spots".

Data from these trapping grids provides the community, industry, government and research institutions with fruit fly activity data that enables the targeting of hot spots together with regular communication of fruit fly trends and pressure patterns to update the community and industry.

"The combined communication, management and control strategies are critical to curbing the spread of Qfly and limiting the impact on our horticultural domestic and export markets," Mr Abberfield said. VISIBLE: Spreading the No Flies On Us message and protecting the region's horticultural industry from Qfly.

Field Officers are deployed as part of the program to target identified hot spot areas and build relationships with landholders to assist, advise and support them to manage and reduce fruit fly populations in high pressure areas controlled by them.

Non-commercial unmanaged fruit fly habitat on private and public land is identified and can be removed at no cost to the landholder by the program.

The FFAWM platform developed in the GMV has supported activities by governments and universities in Victoria, Western Australia, New South Wales and New Zealand to assist in fruit fly management and research.

This platform is complementing trials undertaken by the Macquarie University Fruit Fly Research Team, involving the aerial release of sterile Qfly in Cobram over a three year period.

This sterile release trial, supported by FFAWM strategies and sterile release trapping grids, monitoring the number of sterile and wild fruit flies within radii of 1km, 2km and 5km of the Cobram township, has helped reduce Qfly numbers in Cobram significantly.

"The GMV Fruit Fly Project is about working together to protect our nation's orchard. Together we have been able to build community awareness, education and engagement to reduce fruit fly numbers and minimise the damage caused by fruit fly on our thriving regional horticultural industry," Mr Abberfield said.