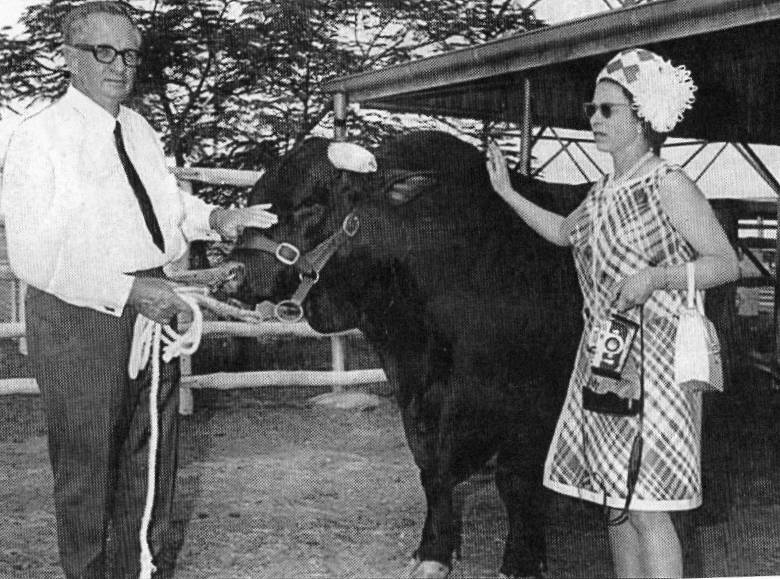 The late Bill Kerr's biggest journalist coup was the ionic picture of Sir James Walker and Queen Elizabeth while visiting the Cumberland Santa Gertruids stud near Longreach in 1970. HIs editor insisted he get a picture of Sir James' cattle and not one of Her Majesty planting a tree.

Bill Kerr had a lengthy and distinguished career in rural journalism, working at Queensland Country Life from 1964 until 1979, when he joined the Queensland Canegrowers Organisation.

BILL KERR, a revered rural journalist and respected chronicler of Queensland's sugar cane industry over many years, has died in Brisbane, aged 78.

Mr Kerr had a lengthy and distinguished career in rural journalism, working at Queensland Country Life from 1964 until 1979 when he joined the Queensland Canegrowers Organisation.

An award-winning writer, he was a foundation member, president and later a life member of the Rural Press Club of Queensland and was elected to the committee at the club's beginning on July 28, 1972.

He traveled widely throughout Queensland for QCL and often recalled that his biggest journalistic 'coup' was in 1970 when Queen Elizabeth II visited Longreach.

"The royal visit was big and Queensland Country Life editor Wallace Skelsey wanted pictures of the Queen with some of James Walker's Santa Gertrudis cattle," he said.

"Suddenly, the Queen, Prince Phillip and Sir James Walker emerged for a quick stroll around the cattle pens. I knew the stud groom so I prompted him to ask his boss if he wanted a souvenir photo of the Queen with a champion bull.

"The Queen couldn't reject her host's request. Her expression warned me not to push my luck, so I quickly snapped off a couple of shots and got the hell out of there."

But for this son of a Sarina cane mill worker and second eldest of six brothers and two sisters, sugar ran as thick as his Scottish ancestry through his veins.

Mr Kerr managed the cane industry's public relations activities during some of the most tumultuous periods in its history and wrote two successful books about the history of the Australian sugar industry.

For more than 30 years he was part of a major transformation of both the sugar industry and the canegrowers organisation.

His family too, was proud of the remarkable book Tin Town Triumph that he wrote in 2019 about his family and the "bygone days of a family from Sarina".

Mr Kerr is survived by his wife Margaret and first wife Gaelle (nee Goodrich) and their three sons and five grandchildren.

His life is to be celebrated at a private family gathering.