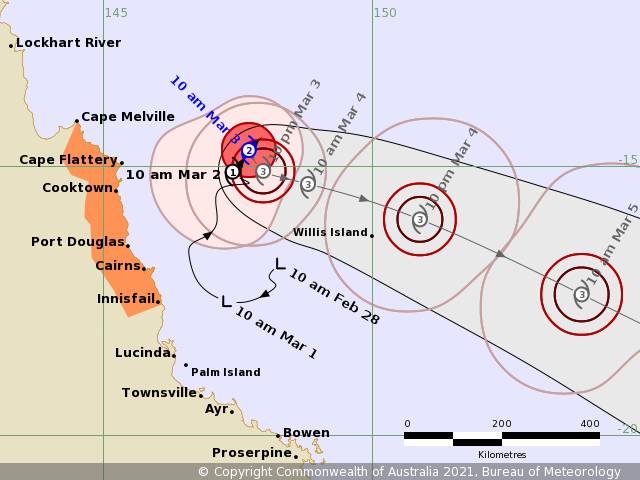 Tropical Cyclone Niran is expected to intensify into a category 3 system in the next 24 hours.

TROPICAL Cylone Niran is expected to intensify into a category three system off the North Queensland coast late Wednesday.

The warning zone has been upgraded for coastal towns between Cape Melville to Innisfail, including Cooktown, Port Douglas, and Cairns.

The category 2 Cyclone has sustained winds near the centre of 100 kilometres per hour with wind gusts to 140km/h.

The system is 320km northeast of Cairns and 285km east northeast of Cooktown and is expected to remain slow-moving off the north Queensland coast while intensifying over the next 24 hours. 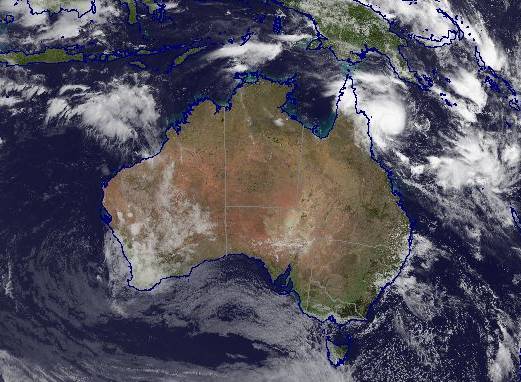 The Bureau of Meteorology said coastal crossing of the cyclone is not expected. 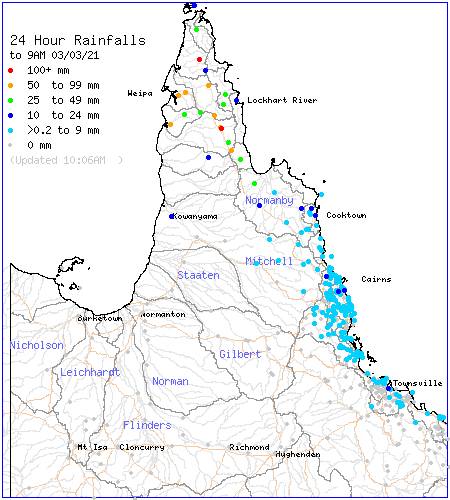 Rainfall totals in the past 24 hours have decreased in North Queensland as Cylone Niran adopts a southeasterly track and accelerates away from the coast. Map: BoM

"A slower than normal rate of development is forecast in the next 12 to 18 hours, becoming a category 3 tonight.

"Beyond that, there may be a slight drop in shear as it begins to move southeastswards."

BoM said further intensification may occur in the short term before the system begins to shear under the subtropical jet on Friday.

"The steering pattern remains weak for now due to the system lying inbetween mid-level anticyclones, and a weak upper trough to the south," the spokesperson said. 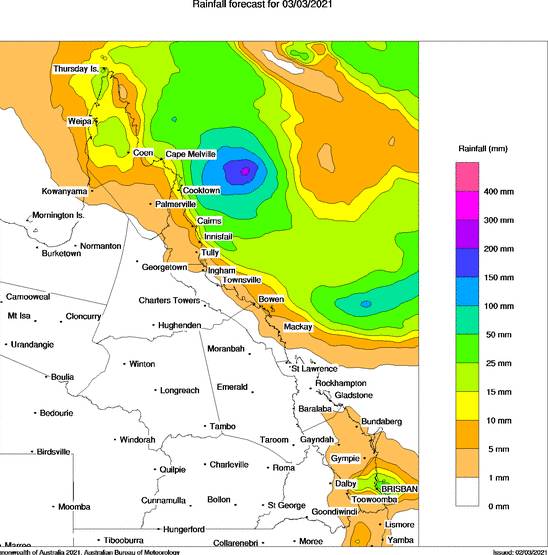 Queensland Rainfall forecast for the next 24 hours. Map: BoM

"There isn't any numerical weather guidance suggesting a westward movement of the system, hence a coastal crossing is ruled out.

"However, as the system deepens over the next 24 hours, there remains some possibility of gales being experienced on exposed mainland and island areas on Queensland's north tropical coast.

"All numerical model guidance agrees that a stronger upper trough will capture the system on Thursday and move it rapidly away to the east-southeast. "

As the cyclone strengthens, it may produce gales about exposed coastal and island communities later today or early on Thursday.

GALES with gusts to 100km/h may develop about exposed coastal and island communities between Cape Melville and Innisfail, including Cooktown, Port Douglas, and Cairns, later today or early on Thursday as the cyclone intensifies.

On Thursday, the cyclone is expected to adopt a southeasterly track and accelerate away from the coast.

A SIGNIFICANT number of north Queensland Banana farms have been severely damaged, after cyclonic winds associated with Tropical Cyclone Niran hit on Monday. Banana crops across the Cassowary Coast and Northern Tablelands have been impacted with some properties around Innisfail - particularly Boogan and Wangan have reported up to 100 per cent losses.