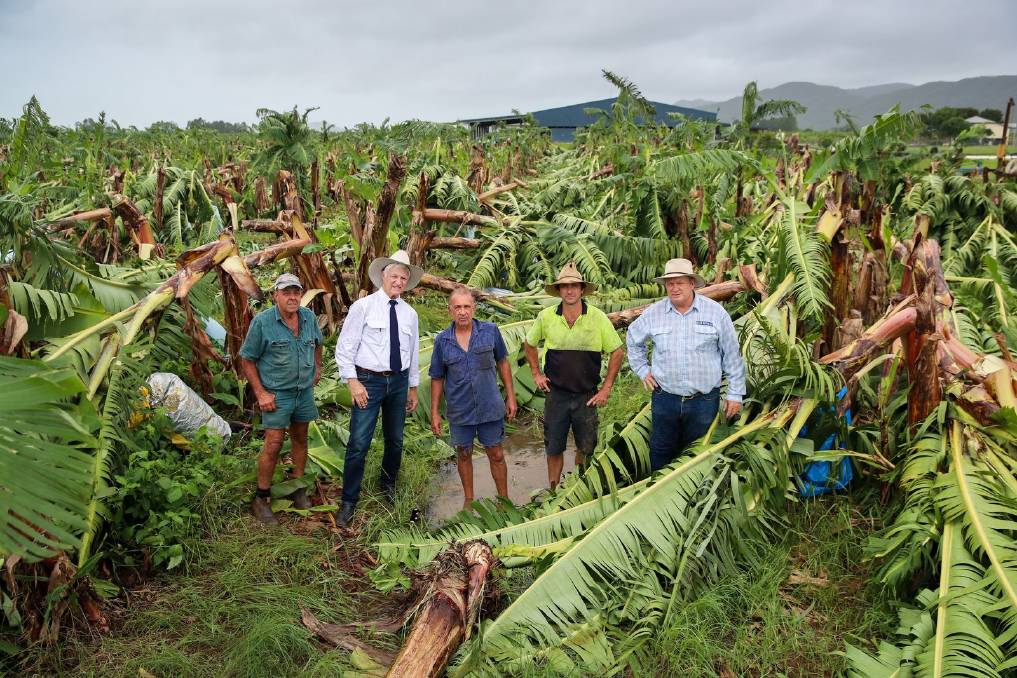 Banana growers on the Cassowary Coast have reported 100 per cent losses since Monday's deadly storm.

A SIGNIFICANT number of north Queensland Banana farms have been severely damaged, after cyclonic winds associated with Tropical Cyclone Niran hit on Monday.

Banana crops across the Cassowary Coast and Northern Tablelands have been impacted with some properties around Innisfail - particularly Boogan and Wangan have reported up to 100 per cent losses.

Crop losses of between 20 per cent and 100 per cent have been reported from Fishery Falls, Cowley, Mission Beach and inland across to Walkamin, Atherton Tablelands.

There have been no reports of damage from the Tully Valley or Lakeland, and the southern Tablelands seem to have had only minor damage.

The cyclonic winds come on top of years of low prices and severe worker shortages caused by COVID-19.

Devastation brought on by strong winds

The Daveney family's were faced with a huge clean up job by Monday lunch time.

The growers released a video showing the true devastation,which was brought on by the low system off the Innisfail coast on Monday.

"With no heads up from the Bureau Of Meterology on the true intensity and direction of the Low, this has been the result," Mr Daveny said.

"Keep Eating Australian bananas, grown by the some of the most resilient farmers."

Howe Farming Enterprises is an operation built up over three generations, amassing more than 607 hectares of bananas across several farms at Walkamin and Mareeba on the Atherton Tablelands, along with coffee, avocado, sugar cane and blueberry crops.

The enterprise grows more than 200 hectares of Banana's at their Mareeba farm.

Howe Farming general manager Kim Mastin said they lost about 50 per cent of their Bananas in Monday's storm. 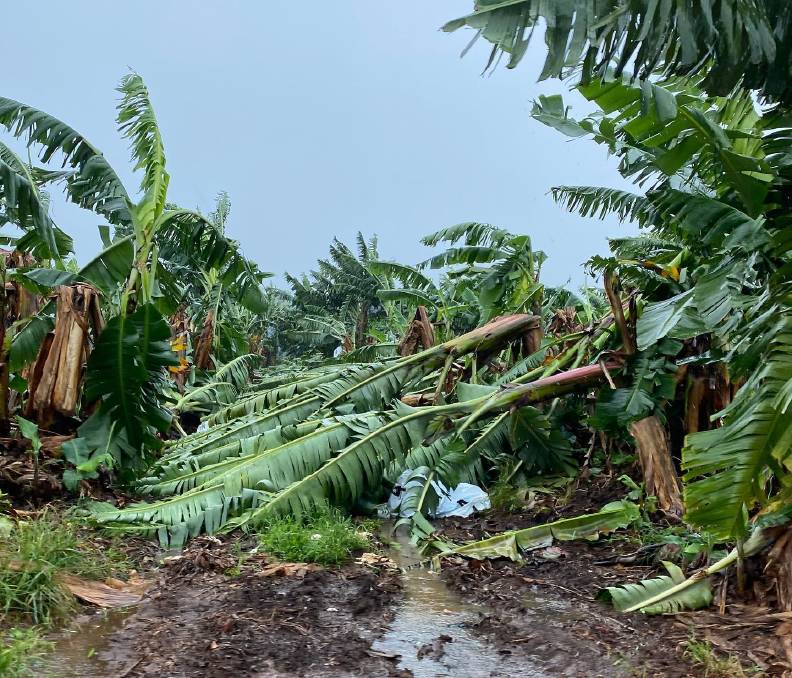 "We had bunches ready to be picked this week, or in the next 13 weeks and they've all been knocked over," Ms Mastin said.

"It started like any normal day and we knew that there was a low off the coast, but it just seemed to intensify quite quickly.

"We had a fair bit of rain, and gusts of wind." 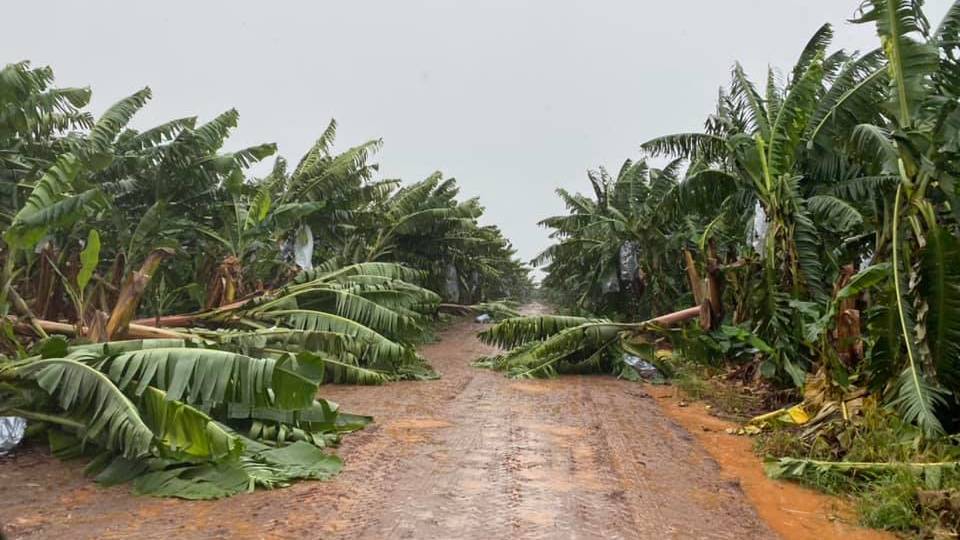 Business as usual: Ms Mastin said they will began the long process of clearing fallen trees to allow tractors and baggers through, to continue harvesting Banana bunches. Picture: Kim Mastin

Ms Mastin said she got a call at 10am on Monday from a worker that trees started to fall over.

"We went for the look and decided probably within half an hour that we should pull all our workers out," she said.

"It's not about salvaging anything, it was just about getting everyone safe and sound out.

"There are other farms worse off than us so we're pretty lucky and it's just another challenge, it's another day in the life of farmer.

"It's just business as usual now, the guys are in there picking and we've got a cleanup crew which will go through, take bags and start cleaning out the tractor rows so we can get tractors and baggers through."

Frank and Dianne Sciacca Banana crops in Boogan, Innisfail were severely damaged, with 100 per cent of their banana bunches fallen off the plants and onto the ground, with some paddocks completely flattened. 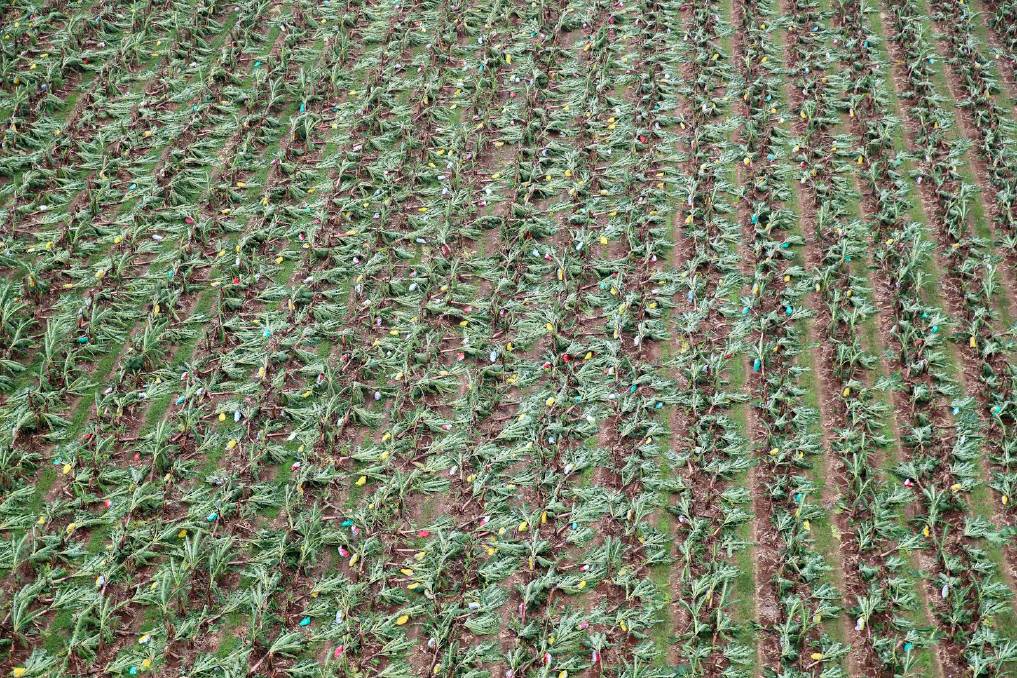 Completely Flattened: The Sciaccas banana farm in Boogan had nearly 100 per crop losses on Monday, after a tropical low that has now intensified into Cyclone Niran impacted the region. Picture: Michael Chambers

The Sciacca's said it was the worst damaged to the region's banana crops since Cyclone Larry and Yasi.

Mr Katter said he will be on the phone to the Prime Minister in coming days to ask for support.

"When we flew in over the Sciacca's property not one bunch of bananas was still on the plant," Mr Katter said.

"The damage bill from this event could go into the tens of millions. We just don't know yet.

"We've been through this before with Larry and Yasi, and 100 other wild weather events, but it is never easy to take. I admire our banana and sugar farmers who get up and go again. 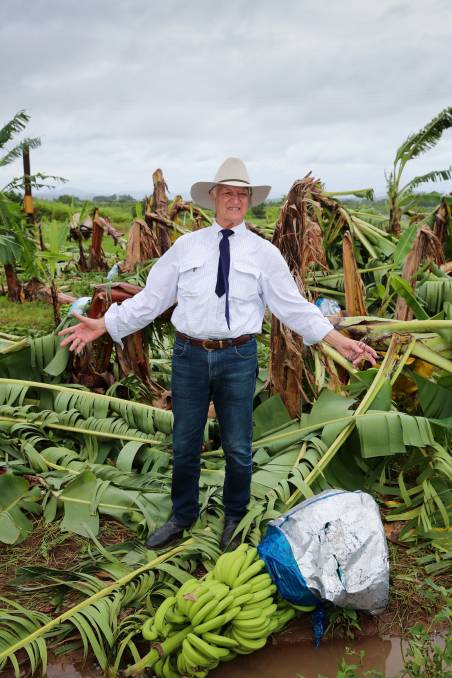 Mr Katter said the government should look at crop and livestock insurance which would be funded by a 1 per cent levy on farmers.

"It would make the recovery from these events a lot easier, and we could rebound quicker," he said.

"Shane Stone handled the North West floods recovery extremely well and I'd like to see him involved here again with the recovery from Cyclone Niran."

Mr Knuth is currently in talks with State government ministers about disaster funding assistance for primary producers in the impacted region.

"The Cyclone formed off the coast of Queensland so therefore this event hasn't been labelled a natural disaster," Mr Knuth said.

"But when you see the devastation on the ground there is no question that this was a natural disaster. "Bananas are the number one item in Australian supermarkets, and they provide us with a nutritious, healthy, high-energy snack. So, we should do everything we can to help our banana farmers get back on their feet.

"I am extremely proud of our farmers who keep on fighting despite these setbacks."

These crop losses follow the ten year anniversary Cyclone Yasi, which wiped out more than 80 per cent of Australia's banana industry back in 2011.