Prime Minister Scott Morrison says he understands reservations in regional Queensland about housing international arrivals at mine camps, describing the mining industry as the 'beating heart of regional economies.' 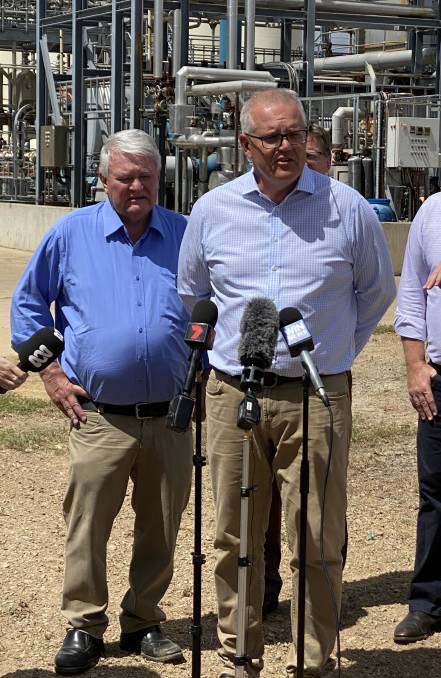 PRIME Minister Scott Morrison says he understands reservations in regional Queensland about housing international arrivals at mine camps, describing the mining industry as the 'beating heart of regional economies.'

Mr Morrison traveled to South 32's Cannington silver and zinc mine about 200km south east of Mount Isa on Wednesday, before heading to Gladstone today.

Calliope has been named as a potential location after Premier Annastacia Palaszczuk last week suggested 'four-star' mining camps could be used to quarantine returned travellers to reduce the risk of housing them in hotels in Brisbane's CBD.

Ms Palaszczuk is expected to raise the issue at the national cabinet meeting tomorrow.

Mr Morrison today said while he was yet to see the proposal, he understood there were reservations about the idea.

"I think there' are clear concerns here in Gladstone for a lot of quite sensible reasons," Mr Morrison said.

"There are also concerns that people up here don't want to see Brisbane's issues dumped on those in the North - you hear that a bit about a few issues up here.

"They have issues around what is means for local health - these are all very legitimate questions and I think any proposal that the Premier would want to bring forward, they would have to square that off."

Flynn MP Ken O'Dowd has been outspoken in his opposition to the plan, saying rural communities such as Calliope are vulnerable and lacking the proper hospital infrastructure should there be an outbreak.

"Major industries in our Gladstone Region are scheduled to conduct critical shutdown maintenance this year and these camps are vital for this work to commence," Mr O'Dowd said.

"The resources and mining sector is the life blood of Central Queensland and I do not want anything to jeopardise that.

"I am completely against this. This whole idea is simply ludicrous and would leave my electorate of Flynn in a very compromised situation.

"Urban centres, such as Brisbane, are far better equipped with hospital facilities along with other medical services to handle the situation.

"Gladstone only has a Level 3 hospital and residents currently have difficulty accessing health specialists even without a pandemic."

Mr Morrison said regional communities may be more receptive to providing quarantine for international arrivals if there was a benefit for the region.

"If there was perhaps additional seasonal workers that were coming through... that had a direct benefit to the region rather than just transferring a problem from one part of Queensland to another. maybe that might be something the locals could see some value in."

"He did the ground work but for something like that to even be considered I think the Premier would have to get the local Labor mayor on board for a start."