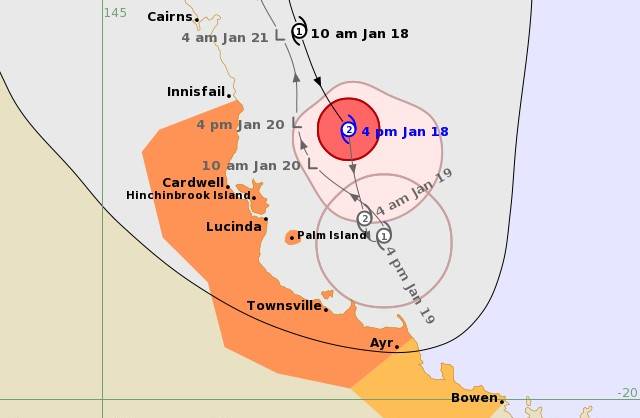 Rescue helicopters and SES volunteers have been deployed to North Queensland as Tropical Cyclone Kimi continues to loiter off the coast.

RESCUE helicopters and SES volunteers have been deployed to North Queensland as Tropical Cyclone Kimi continues to loiter off the coast.

Premier Annastacia Palaszczuk this afternoon convened a Queensland Disaster Management meeting and said the North was well prepared for any potential impact.

The Bureau of Meteorology's latest advice at 5pm shows Kimi, a category two system, was likely to stall over the sea between Hinchinbrook Island and Townsville, before weakening and moving north as a tropical low.

However, BoM Senior Meteorologist Laura Boekel said Kimi was an unpredictable system and a coastal crossing between Hinchinbrook Island and Townsville tonight or on Tuesday remained a possibility.

"As it moves further south it is moving into an environment that isn't favourable for development so we are expecting it to begin weakening either from this evening or tomorrow," Ms Boekel said.

"The 2pm issue did see a change in what we were expecting the cyclone to do and the latest guide from the bureau no longer has Kimi crossing the coast but it does have it meandering in the ocean, weakening as it moves south and then looping back and continuing to weaken as it moves north up the coast as a low pressure system.

"The uncertainty is high with TC Kimi and that's because it's a really small system and the environmental winds are quite light, so while we have the uncertainty that is high there still remains a distinct possibility of Kimi crossing the coast as a category two system."

Ms Boekel said destructive winds of up to 130km/h and gales of 120km/h were likely between island communities between Innisfail and Ayr tonight and tomorrow.

A flood watch remains in place for waters between Cape Flattery and Ingham.

She said the SES had already responded to 80 calls for assistance, mainly for leaking roofs around the Cairns area.

Ms Palaszczuk urged residents to be prepared and follow advice of emergency services.

"Now is the time especially in the north to put away any loose items and make sure cyclone kits are prepared.

"There's going to be a lot of rainfall so the key message is if it's flooded forget it.

"Stay safe Queensland, we've done this before, I know that we can all do this again together."