According to trial results the pre-emergent herbicide Sakura is still going strong after a decade in action. 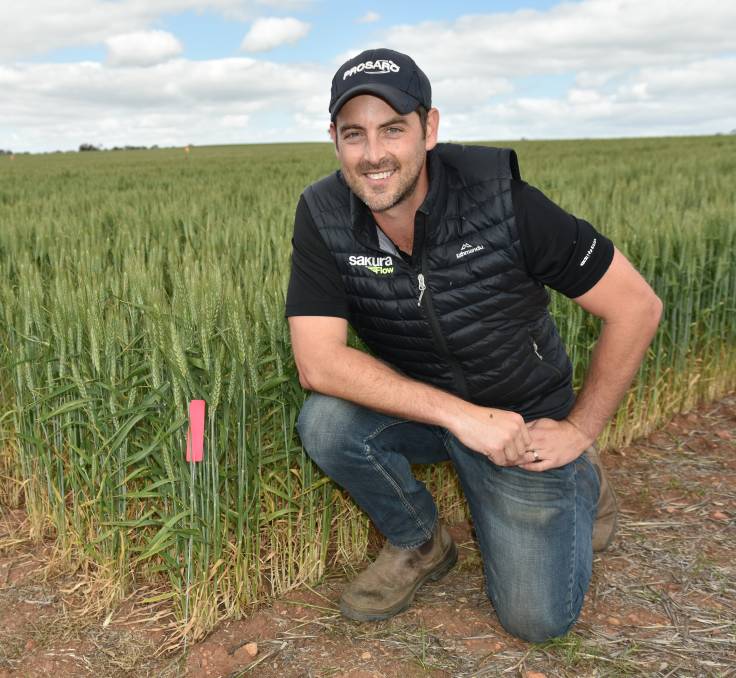 GIVEN the uncanny ability of weeds to evolve and to develop resistance there are very few herbicides that enjoy a long stint on the shelves.

On the grass weed front we had the pre-emergent trifluralin which was a mainstay for many years, and now Bayer's Sakura can be added to the list.

Sakura, based on the active ingredient pyroxasulfone, will chalk up its tenth year on the market next year.

And it appears its success on grass weeds is not waning yet.

Bayer said it conducted a dozen trials in wheat crops across all mainland states and found that the efficacy of Sakura was holding up when compared against new pre-ems.

On average across all 12 trials, Sakura Flow, the suspension concentrate (SC) formulation of the herbicide, applied at 210 mL/ha, achieved 86 percent control of annual ryegrass.

Bayer NSW Market Development Agronomist Gus Maclennan said four of the fully replicated trials were located in the Riverina, where the herbicide had to contend with wet autumn conditions, which often break down residual efficacy.

On the plus side, ideal autumn conditions saw a good flush of weeds germinated and good control from pre-planting knockdown herbicide applications and good residual control from the pre-emergent herbicides.

Mr Maclennan said the frequent rainfall events, however, also resulted in conditions conducive to breaking down herbicide activity, which, in turn, highlighted the longer residual control provided by Sakura.

He said initially there was little difference in efficacy.

"Beyond the first few weeks is where you see the activity from some herbicides breaking down and new germinations growing through," he said.

"The longer residual control provided by Sakura then becomes evident, with most of the late germinating weeds in those treatments being controlled.''

Mr Maclennan said the longer residual control provided by Sakura was one of its distinguishing characteristics, but there are also several other attributes that are particularly suited to current farming systems in Australia.

In particular, it is a natural fit in the no-till systems that now dominate our cropping landscape.

"Its near-ideal soil adhesion and stubble binding properties mean that after application it is available in sufficient quantity in most Australian soils to control weeds in a way well suited to our no-till and stubble retention farming systems,'' Mr Maclennan said.

WA presented different seasonal circumstances, with a dry start to the season, but Sakura still managed to give good long-term control of ryegrass.

"Following knockdown applications, we had a dry opening to the season for a month to six weeks before we started to get good moisture in the soil profile from late July-August,'' said Bayer WA market development agronomist Craig White.

"At some sites, we were dealing with ryegrass plant densities of 600-800 per square metre and late germinations," Mr White said.

"When the later rains came, the level of control between the different herbicides started to separate and you could see the longer residual control with Sakura.

"Some of the other products looked very good early, but then lacked the residual control,'' Mr Willis said.

"The trials really showed just how long the residual control of Sakura is when compared with some other products.''

The story Sakura chalks up a decade first appeared on Farm Online.