CALM BEFORE THE STORM: The scene at Roma saleyard this morning. PHOTO: Sally Gall

SHORT supply, strong demand may be the underlying driver of staggering cattle prices but diving deeper into that, agents say what is keeping the market high right now is the buffer savvy traders have secured.

Those who bought on a much lower market and are selling now have pockets deep enough to pay the 820 cents a kilogram carcase weight, or 440c/kg liveweight, young cattle are now commanding.

And there are enough in that boat to keep the market at its current level well into next year, given the lower numbers on offer, so long as there is feed in paddocks, many agents believe.

The Eastern Young Cattle Indicator has hovered around that record mark for the past week, sitting today at 822.50c/kg carcase weight, up 30c on where it was four weeks ago.

"For those buying and selling on the same market, it's not so tough at these rates, and the rain will keep them active," he said.

The traditional August/September drop in the market - which many restockers who offloaded in drought were waiting on - didn't eventuate this year, he said.

That was a sign the never-before-seen strength of the market would hold, Mr Mulvihill said.

Numbers on offer seem to be holding beyond expectations too.

"Some are selling early now to take advantage of the prices, and that will keep supply short into the new year and upward pressure on the market," he said.

Cattle prices across all sectors showed a rise in the four weeks to mid-October, Rabobank's Angus Gidley-Baird reported in the latest Agribusiness Monthly.

Thomas Elder Markets' grass fed cattle matrices show there is still money to made (at buying-in rates of 440c/kg live weight) if you can turn off at a price of 350c/kg or higher once the weight is put on.

"There are better profit margins in fact than in times when we were buying store cattle for $800 a head," he said.

He believes the Australian cattle market has now settled in a new era.

The flow of Victorian cattle going into NSW had eased in the past six weeks, he said, likely on the back of southern prices lifting to be more in line with those in the north.

Indeed, female slaughter numbers for Queensland are down 42 per cent year-on-year.

They have remained below 45pc of the total slaughter for Queensland and NSW for the past month, a value in the range of rebuilding, although they are still not as low as previous recovery years 2017 and 2011, Mr Gildley-Baird said.

Generally, the low point of female slaughter corresponds to the EYCI's high point, with prices easing from that point onwards, he said.

A PUNT on heifers of a different breed to what they typically trade in, bought out of NSW in the midst of drought when the market was tumbling, has delivered a result far beyond the expectations of South Gippsland's Dale and Robyn Scott.

The couple sold 45 Speckle Park commercial cow and calf units to an average $4,034 and a top of $5,580 for four units, on AuctionsPlus last week. 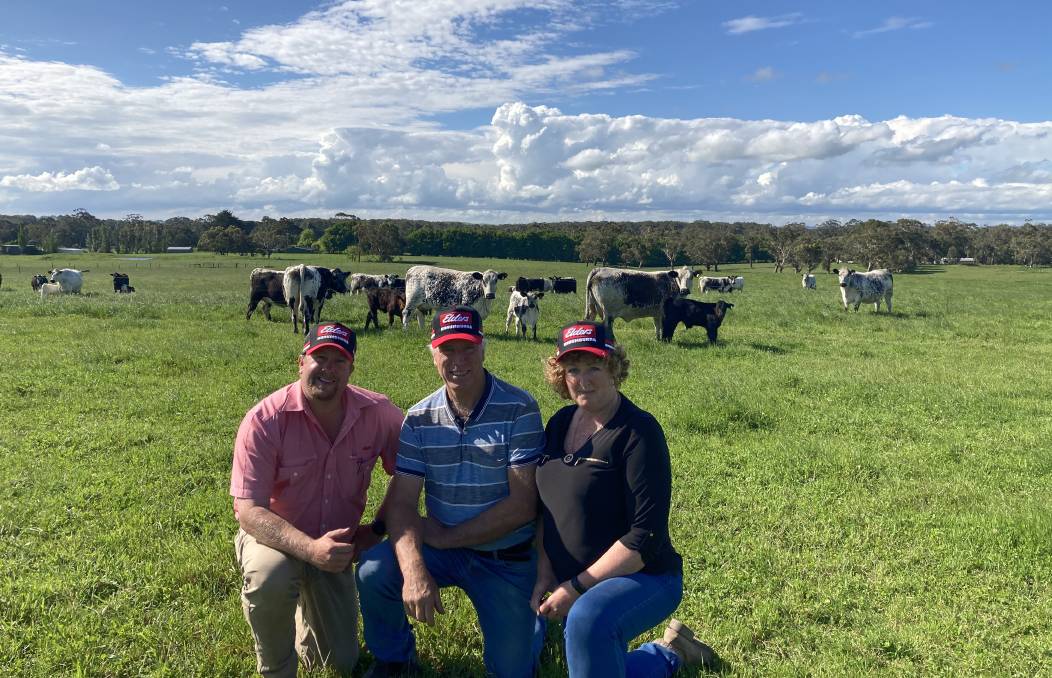 Their agent, Alex Dixon, Elders Korumburra, believes it could be a national record for commercial beef cow and calf units. They were second calvers and the calves were four to eight weeks old.

Most stayed in Victoria, some went back to NSW and some to South Australia.

The Scotts run around 200 breeders on improved pastures at Stony Creek, opportunity buying mostly Angus and Hereford weaner heifers and turning them off as first or second calvers.

Their country is high rainfall, too wet to carry heavy cattle.

This was their first venture into Speckles. They bought in Speckle bulls for joining and Mr Scott said he had it in the back of his mind, given the marbling of the breed, he might finish the progeny and sell beef at farmers markets.

But as the price of cattle and the demand for replacement females went through the roof this year, the Scotts stuck with their typical game plan.

"They were bought in August 2018 at a market low and sparked a lot of interest when they arrived - plenty of people drove past slowly to take a look," Mr Scott said.

"They proved exceptionally good cattle - great all over fat coverage and good muscling. We thought they'd all go back north but there is obviously a growing demand down here."

The Scotts are now thinking they will put Speckle bulls to Angus heifers to capture the demand from dairy farmers for 12 month old, 400 kilogram bulls to join to Holsteins for dairy beef bobby calves.