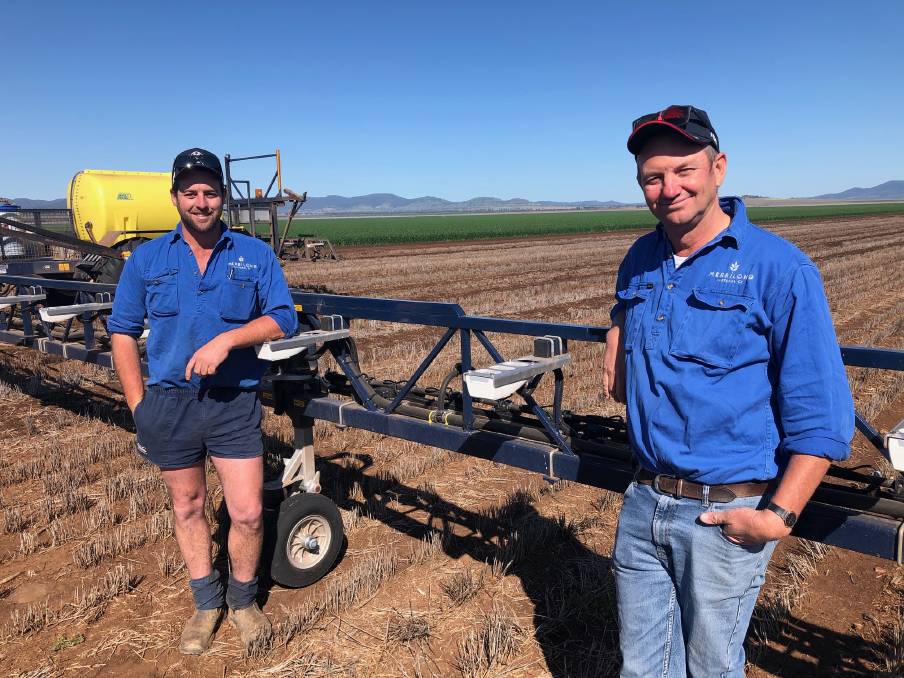 HAPPY CHAPPIES: David Brownhill (right) and sprayer operator Lochie Murray are delighted with the performance of their WEED-IT Quadro trailing sprayer in a large-scale cropping operation on the NSW Liverpool Plains.

The Brownhill brothers from the NSW Liverpool Plains are singing the praises of their new WEED-IT Quadro spot sprayer.

Farming brothers David and Gordon Brownhill from the NSW Liverpool Plains first became aware of the value of weed-sensing technology back in the 1990s.

David Brownhill says the latest spray technology is an essential tool for no-till broadacre farmers and the pair have received an immediate financial return from their new trailed WEED-IT Quadro sprayer.

They are third generation farmers who run Merrilong Pastoral Company which owns 10,000 hectares of fertile land in north west NSW.

They run stock on 2000ha and crop the rest to cotton, sorghum, corn, four types of wheat, barley, chickpeas and faba beans.

Gordon Brownhill is general manager while David is business manager. They also have a farm manager and nine full time staff.

David Brownhill said he first became interested in weed-sensing technology when the then NSW Department of Agriculture was developing a system in Tamworth.

He and Gordon bought an early prototype. It was not user-friendly.

However, in 1998 David won a Nuffield Scholarship and used the opportunity to visit California to see how spot-spray technology was being used with cotton.

That led him to form a company in 2001 to import weed-sensing technology on a 24-metre boom.

He then changed tack and used another version of the technology until this year when he bought the Croplands WEED-IT Quadro with a 36m boom.

The main reason he swapped to WEED-IT was its new blue light system.

"Earlier brands use red LED lights but blue LED lights are more accurate at detecting the green of chlorophyll in plants and they operate just as well at night," he said.

The night operation matters as the Brownhills can spray glyphosate during the day and gramoxone at night because the latter is more effective at night.

Their best effort has been 780ha covered in 24 hours.

The WEED-IT system is compatible with most boom types and the Brownhills run theirs on a Hayes sprayer made in Queensland. HITTING THE SPOT: The WEED-IT spot sprayer delivers herbicide right on top of the target weeds.

"We are super happy. It has been a great investment. The payback has been crazy. In the first eight weeks we saved $157,000 off the weed bill," David Brownhill said.

That massive savings was because after two years of drought there were minimal weeds - only about four percent cover. This meant they could spray their entire 8000ha cropping area with the spot-sprayer to hit the hardy survivors without wasting spray on barren areas.

"The guy running our spraying operation brought a proposal to the board. He did the maths and said we would pay it off in three years.

"The way it is going, it will be in two. It is one of the few bits of technology that gives you a return to the pocket straight away."

Mr Brownhill said integrated pest management (IPM) was stock standard for anyone in the cotton industry and they do practices such as winter and summer rotations and use targeted sprays where possible which do not harm beneficial insects.

"I believe in science and technology and have no issues with herbicides and insecticides but the less we can use the better," he said.

Spot spraying was a perfect complement to IPM, he said. It also meant they can deal with hard-to-kill weeds by using higher concentrations without breaking the bank.

The WEED-IT Quadro provided options. It can be specified with two tanks to apply two different chemicals on different rates.

Or it can broadacre spray with one chemical while spot spraying with the other. WEED-IT sensors can also be retrofitted to several makes and models of self-propelled sprayers with kits specifically designed for each boom.

Mr Brownhill ordered a model with just one 4000-litre tank and only spot sprayers. He does have the option to add another tank later if required.

"It is not a huge tank but then when only spraying four per cent of a paddock you do not use much. It also means little time is wasted filling up."

Weed-detecting sensors on the WEED-IT boom are on 1m spacings. Each sensor controls four nozzles fitted with a high speed 50hz, 6v solenoid.

The boom is 1.1m high to prevent shading of weeds and background calibration happens 40,000 times per second so there are no issues with accuracy in different soil conditions.

Crop rotations on the Brownhills' farm see wheat harvested in December and then 10-11 months fallow before replanting. During that fallow time, paddocks are sprayed on 4-6 week intervals.

Mr Brownhill said the WEED-IT can work at about 13 kph which allowed them to cover 36 ha an hour.

"The accuracy at 13 kph is sensational."

They use a 320 horsepower tractor to tow the Quadro however Mr Brownhill said that was overkill.

The story How to 'weed' $157,000 out of your spray bill in eight weeks first appeared on Farm Online.