The top price ram made $16,000 but Trent Carter, Wallaloo Merinos, was most pleased about the depth of the sale, with an average of $2731.

IT WAS a challenging sale for the team at Wallaloo Park Merino and Poll Merino this year with a host of circumstances making last week's ram sale a logistical challenge, but the results were worth it.

Overall, 175 of the 200 rams presented sold, with an average of $2731, with a large majority of the passed in lots sold privately at the end of the sale.

"We're really pleased with how things panned out, we've managed to sell the same number of rams as last year and the average is still up there, which is a very good result," said stud co-principal Trent Carter.

The top price ram made $16,000, selling to Tintinara breeder Richard Harkness, SWM, while the first lot of the day made $11,000 to Coryule Merinos, near Lismore in the Western District.

This complemented the Carters' big success at the Adelaide Show ram sale earlier in the month, where they had a 15 month old ram make a stunning $76,000, sold to a syndicate of Western Australian interests.

Together with parents John and Jenny and wife Kate, Mr Carter had to leap through a series of hoops so that the on-farm ram sale could take place at all. 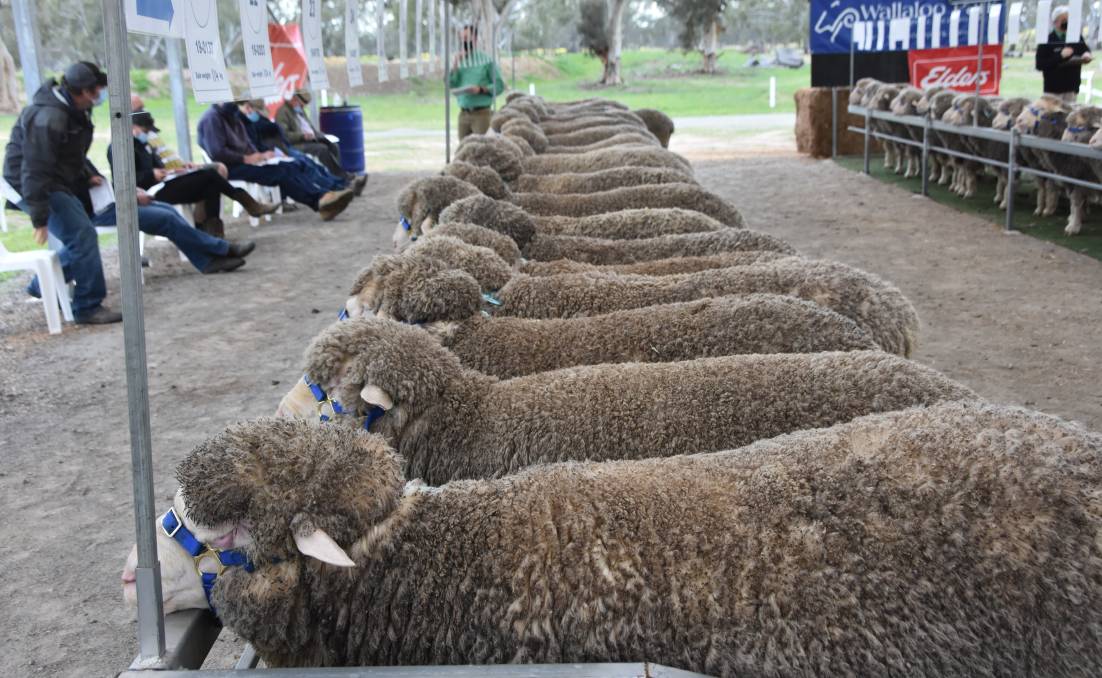 "Safety was obviously a priority so we made sure we got all the COVID-19 protocols nailed down and all the people in attendance were very good in that regard which we thank them for."

The current border restrictions meant a number of long-term clients could not attend the sale in person, meaning Auctions Plus played a key role.

"We managed to sell 66 of the rams via Auctions Plus, which was a great result and allowed everyone a chance to get a ram, even though there were a few little technical issues to work through at times," Mr Carter said.

In spite of the border closures there was good interest from interstate, with buyers from Balranald, Moulamein and Oakland, Boyup Brook and Newdegate in WA and South Australia all featuring, with the Barr family, Newdegate one of the volume buyers on the day.

The Wallaloo Park reputation for strong performance in prized traits such as yearling clean fleece weight (YCFW) and flexibility, with high scores in the dual purpose plus (DP+) scale ensured bidding was spirited throughout the sale.

While there was stud interest from outside the region, strong local interest for flock rams also resulted in a large number of sales, with buyers from the south-east Wimmera, including Glenorchy, Marnoo, Navarre and Avoca along with west Wimmera and Western District buyers all making their presence felt.

"Given the year we've had with COVID-19 and the uncertainty it has created, combined with what's been happening in the wool market we were really happy with how everything went on the day," Mr Carter said.