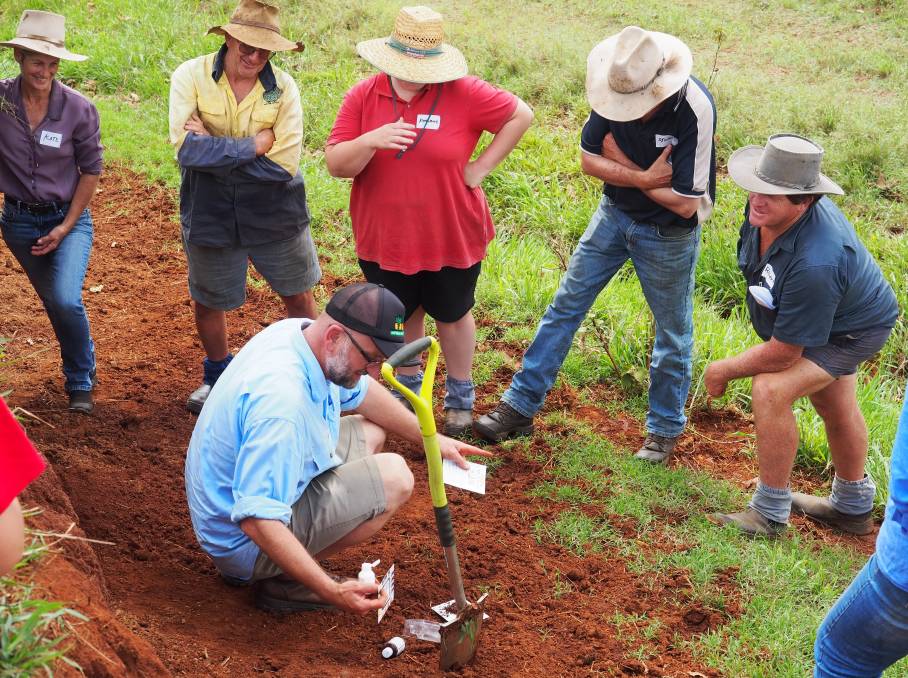 Far North farmers are taking an interest in soil health and sharing their knowledge with others.

Farmers in the Far North are digging deep to expand their knowledge of soil health in a bid to establish more productive land practices.

FARMERS in the Far North are digging deep to expand their knowledge of soil health in a bid to establish more productive land practices.

Terrain NRM has been running a soil health 'digging deeper' program since 2014 and while organiser Fiona George said it was initially met with some skepticism, landholders were now getting on board.

More than 100 farmers have now taken part in the program and other soil health programs and are seeing the benefits.

"Quite a few people thought we were selling 'snake oil' at first," Ms George said.

"With soil being your number one asset in a farm business, after your people, it makes absolute sense to ensure it is as healthy and productive as possible."

Ms George said the Wet Tropics was one of the regions leading the way on soil health in Australia.

Some of the benefits of regenerative farming, or soil-based farming, include healthier crops and better productivity.

It also has environmental benefits including fewer nutrients leaching into water ways, less runoff from the paddock and lower carbon emissions.

Soil Land Food expert David Hardwick has been a key facilitators of soil health workshops across the Far North region.

Mr Hardwick said several farmers had emerged as champions for soil health-based farming over the last five to six years and they were keen to help other farmers learn more.

"We know that one of the best ways to support farmers through change is for other farmers who've already done it to help them, so we saw this as an opportunity to accelerate the awareness and adoption of soil health-based farming,'' Mr Hardwick said.

A 'soil health coaches toolkit' has been established which contains practical tips and strategies for farmers who are supporting other farmers to make changes.

It is part of a strategy to build a network of soil health 'coaches' across the Wet Tropics who can help other farmers in the cane, banana and tropical fruit industries.

Farmers interested in finding out more can speak to their WTSIP extension officer, Fiona George from the Wet Tropics Major Integrated Project in Tully on 0488 702 203, Lawrence di Bella from Herbert Cane Productivity Services on 0448084252, Michael Waring from Regenerative Cane Farmers Network on 0428 771361 or Rowan Shee from Terrain NRM.