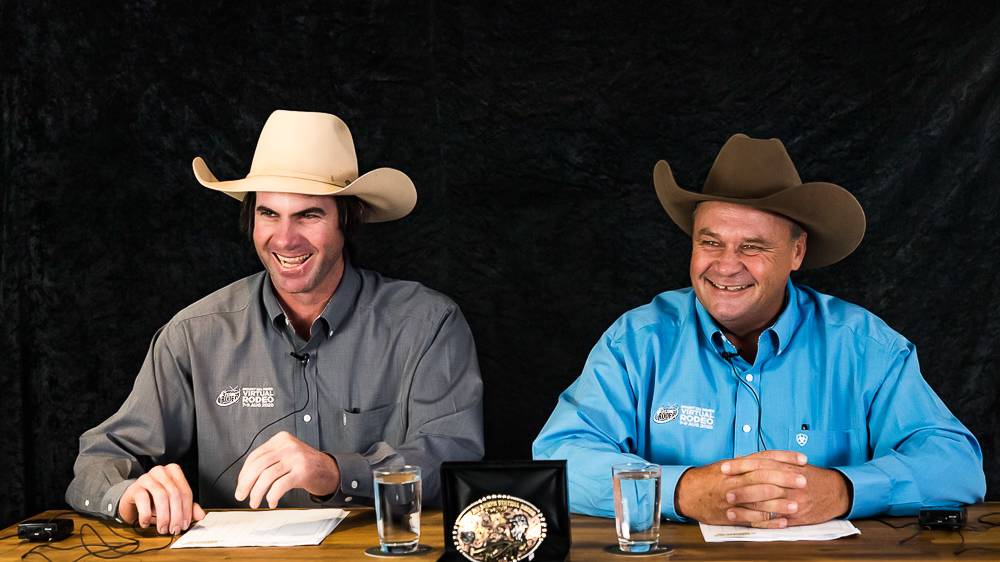 Announcers Aaron Ryan (left) and Randall Spann, who was celebrating his 20th year as an Isa Rodeo roughstock announcer, on the 2020 Virtual Rodeo production set.

This equated to 270,666 hours being watched with an average watch time of just under 25 minutes.

Ms Flecker said the majority of viewers (97.6 per cent) were fellow Australians, followed by New Zealanders (1.6 per cent).

Ms Flecker said Queenslanders representing 25 per cent of viewers tuned in from Maryborough to Mount Isa, Brisbane to Biloela, Tin Can Bay to Tully and from the tip of the Cape to Coolangatta.

"Our southern mates in New South Wales came in close second accounting for 23 per cent of viewers, with Victorians accounting for 17 per cent," she said.

"We asked our audience to share photos on our social media and it was just amazing to see families dressed in western gear, even including chaps in Victoria to rodeo fans watching on a big screen set up outside on their property," she said. Ms Flecker said most tuned in on mobile phone (55 per cent), 31 per cent on desktop, 8 per cent tablet and 6 per cent TV with majority going direct to www.isarodeo.com.au

The Virtual Rodeo featured a mix of rodeo action (from videos sent in by competitors from around Australia and overseas), interviews with rodeo champions, stunning Outback Queensland scenery and live performances by three acts, Lee Kernaghan, Nashville-based O'Shea and Casey Barnes.

"We may not have had the roar of the crowd this year but we're keeping it alive for the competitors, the fans, our sponsors and partners and all the volunteers and people behind the scenes," Ms Flecker said. "The response has been overwhelmingly positive. It was a massive undertaking to create this concept from scratch - considering the safety of competitors and stock through to ensuring the viewing experience was fast paced and fun for our audience tuning in around the world."

Ms Flecker said the rodeo attracted just under 100 nominations in all 16 events, including Open, 2nd Division and Junior from Australia's top rodeo athletes plus some international rides.

"A massive thank you to the competitors who sent in their videos and competed to win the cash and a very real buckle," Ms Flecker said. "The reality was there was no roar of the crowd or victory lap in the arena but you are part of Isa Rodeo history and our Champions for 2020."