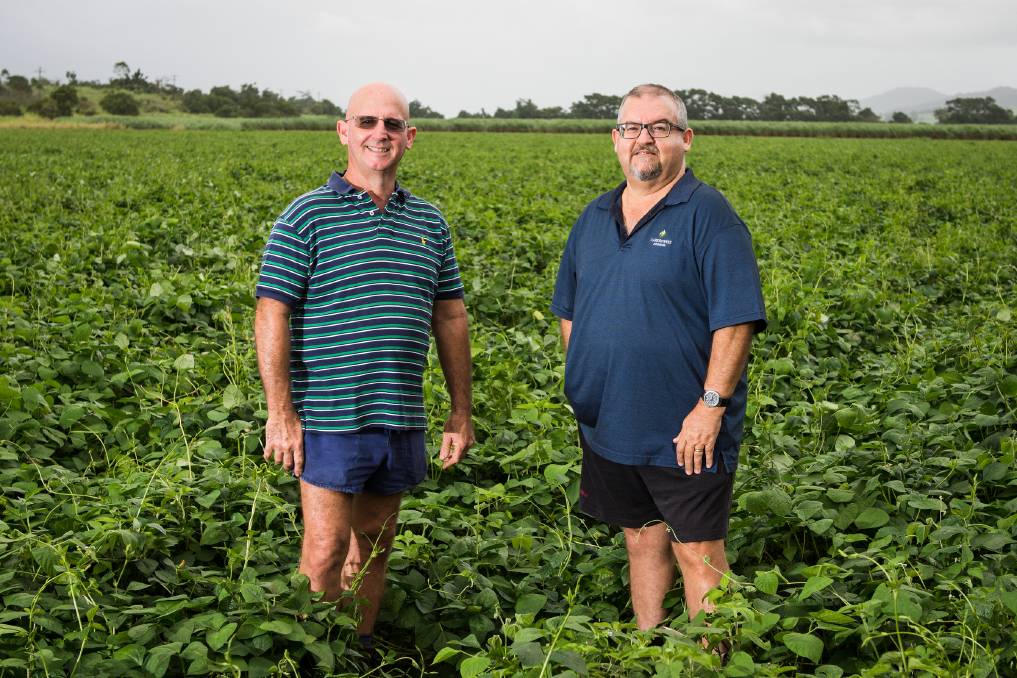 Cane growers Sam and Michael Spina among the fallow crop planted on their Innisfail farm to help improve soil health.

An Innisfail sugar cane farmer has reduced his fertiliser use by 20 per cent, without affecting yield.

AN Innisfail sugar cane farmer has reduced his fertiliser use by 20 per cent, without affecting yield.

Mr Spina said he had started planting bean fallow crops two years ago with the help of a new tractor partly financed through the Reef Trust IV program.

He said as a small farm, they would not have been able to do so without the program delivered by the Wet Tropics Sugar Industry Partnership.

"As a small farm we couldn't have afforded it otherwise,'' he said. "We re-plant cane on

increase the nitrogen in our soil in a more natural way."

He then accessed an all-of-farm nutrient management program, also developed by WTSIP officers last year as part of a free service to growers.

"We had a really good look at the soil tests and matched the fertiliser blend to those tests,'' Mr Spina said.

"We changed fertiliser and reduced it, and experienced no productivity losses.

"We're still up around 90 tonnes (of cane) per hectare, depending on the weather and the season.

"We saw in the soil tests that some paddocks needed more super phosphate in the ratoons so we also changed that.

"Our fertiliser box is on GPS now so we can automatically adjust the rate as we go."

The family's farm is about 1.5km from the Johnstone River and 8km from the ocean, and Mr Spina said they had also laser levelled their land and reshaped drains to help improve water quality.

"Laser levelling helps to produce a more even crop and it's also helping with water quality,'' he said.

"With the grassed headlands and drains as well, when the water runs off the paddock it moves slowly and goes into the spoon drains first so any sediment can settle."

"If there is fertiliser coming off our paddocks, we want to know about it so we can fix it."

The Spinas are one of 39 Wet Tropics growers to receive tenders to reduce fertiliser use on their farms.

WTSIP chair Joe Marano said one the main benefits of the system was that growers could choose the practice changes they believed would be most effective on their farm.

"They've been trialling a range of different ways to reduce nitrogen - from using controlled-release fertilisers or applying mill mud to growing legumes as a source of nitrogen and buying specialised equipment,'' Mr Marano said.

"These growers have been able to reduce their use of nitrogen fertiliser without affecting their yields - a good result for profitability and for water quality."