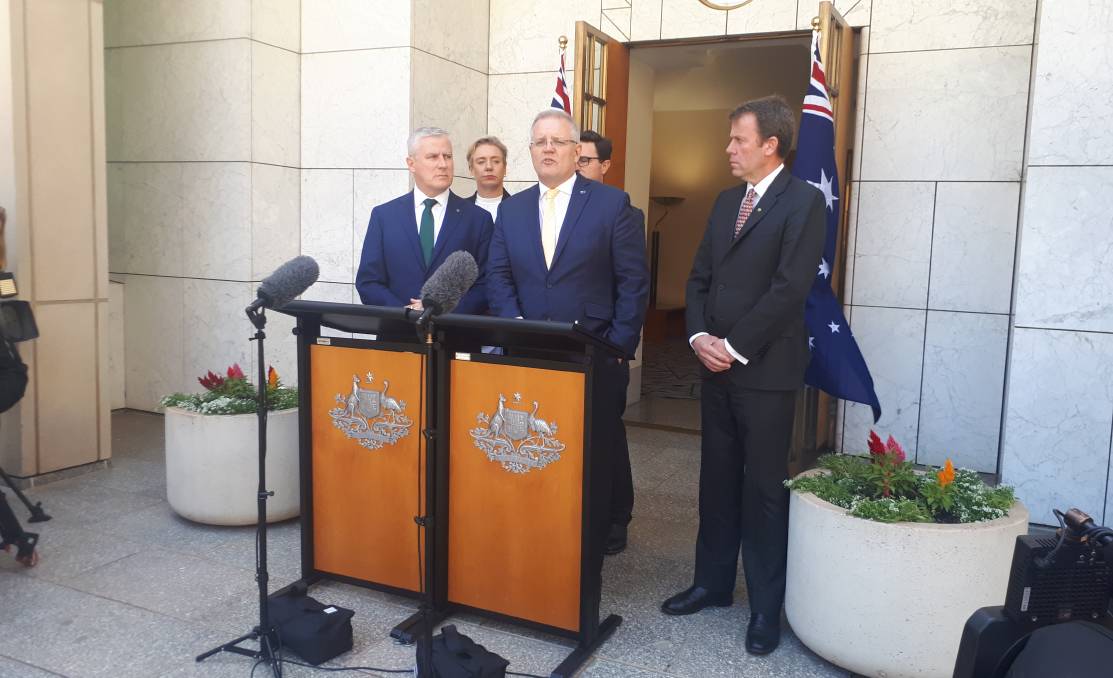 Federal government has an audacious plan to help irrigators grow fodder, but farmers fear it may distort the market - a deep dive

The federal government has announced new drought support measure after it signed a $98 million deal with the South Australian government to supply 100 gigalitres of cheap water for southern Murray Darling Basin irrigators to grow pastures and fodder for livestock.

An estimated 120,000 tonnes of feed could be grown with the water allocation, which will be made available to fodder producers and dairy farmers, who could grow pasture for their herds.

However, significant questions remain over how the water will be allocated, or the fodder distributed.

Questions about potential feed market distortions and whether proactive producers who have locked in long-term feed supply contracts to ride out the drought will be disadvantaged when the rush of subsidised fodder hits the market.

"We are stepping up our drought response once again to meet the increasing needs as the drought's effects also step up," he said.

The water for fodder will be drawn from Southern Basin storages and SA's carryover allocation, in exchange for $88m in federal funding to SA's Adelaide desalination plant.

SA will get an additional $10m from the federal government in recognition of its support.

Drought and Water Minister, David Littleproud, said the government wanted to help to ensure livestock producers could hang on to a critical mass of their livestock through the drought.

"This will help farmers maintain their breeding stock during the drought so when it breaks farmers can recover faster," he said.

Irrigators will be able to apply for the water, to be offered for purchase at a "deep discount" through a subscription scheme which could supply up to 6000 growers.

Their contracts will stipulate growers only use the water on fodder crops, and the water cannot be transferred from one owner to another.

Figures are yet to be finalised but Mr Littleproud said irrigators might be allocated around 25 megalitres each,at a cost of $100/ML.

Applications are expected to open by the end of the year and allocations could be available early in the new year, with delivery facilitated by state agencies.

Applauding the co-operation of the SA Premier Steven Marshall, Mr Littleproud said around 4000 to 6000 may subscribe to the 100GL allocation, estimated through ABARES data.

He said the allocation was a future-proofing move and he would ensure there are "mechanisms" in place to regulate it before it kicks off.

"There is some good fodder coming into the Southern Basin at the moment, but if stays dry... we need to be thinking six months months in advance," he said.

"There are mechanisms being devised as we speak.

"The intent of this is there and we are working with water providers... there is co-operation with everybody."

A raft of questions still needed to be answered about how the scheme will work, such as will the price of the fodder grown on subsidised water be capped? Will there be rules to ensure it will be supplied to drought-hit areas? And how will on-farm water use be monitored?

Australian Farm Institute executive director, Richard Heath, said unless the government tightly controlled the fodder supply chain there was a risk the government's scheme would not achieve its goal of keeping producers' core breeding stock alive.

"It is a market intervention and they can be risky and lead to perverse outcomes unless there is a massive amount of detail and control on the supply chain," he said.

"I don't want to rubbish the good sentiment of the scheme, but there is an issue about keeping core breeding stock alive.

"Simply saying we will release more fodder is not a solution without understanding the detail of how it will keep the core herds going."

National Farmers Federation president, Fiona Simson, said it was crucial for the livestock sector to retain core breeding stock, but foreshadowed questions over how the scheme would work.

"We are keen to understand more of the detail around exactly how the 100 gigalitres of new water will be allocated and managed for southern basin fodder producers," she said.

Deniliquin irrigator, Noel Graham, applauded the government on its initiative, but was concerned 25ML per irrigator would make little difference.

"An allocation of just 25ML per irrigator would be insufficient to grow anything meaningful," Mr Graham said.

"It would allow you to grow around two hectares of fodder in summer and would be enough for a first watering of 10 hectares in autumn.

"It might be useful if you're adding it to something but everyone is on zero allocation, so it's of little value as far as I can see unless allocated differently."

"It typifies the lack of strategic thinking, this is a reaction, it's poorly targeted and it is more about being seen to do something than actually addressing the problem," he said.

"It is window dressing in the sense that it might look good that they are doing something, but it's not going to touch the sides."

Mr Mailler said these sort of market distortions penalised growers who had produced fodder for sale.

"For people like me who have hay in the shed, because I have done my job and put fodder reserves away, who have sold hay to their neighbours, these guys are basically penalising me," he said.

"They are targeting the wrong end of the spectrum and are running around trying to put out spot-fires because they haven't done their job.

"Most of the drought package is largely wasted money, it is a poor investment from a tax payers perspective and does nothing to address the structural problems in the industry.

"Ultimately it will run out, they are spending money but six months down the track there will be no net gain for that investment, the water will be gone, the hay will be gone and the drought won't be over."

Grain Growers chairman Brett Hosking said there were still many questions to be answered about the fodder announcement.

He said he was unsure about the payment to the South Australian government.

Mr Hosking also questioned whether the package could have focused on providing money for fodder instead, saying it valued water on the high side.

At present at rough calculations a megalitre of water could grow around 1.5 tonnes a hectare of dry matter feed, whereas the price of $1000/ML could at current values buy as much as four tonnes of grain for the same price.

"Many dairy farmers had made the decision to sell water and buy in fodder, will this decision change their plans?" he pondered.

He also asked whether there would be sufficient seed for popular summer fodder crops such as sorghum and corn.

The question of seed and input availability was also high in the mind of Australian Fodder Industry Association chief executive John McKew.

"There are a lot of questions to work through, will there be seed, how much fodder will be produced as a result of the initiative, especially if there is a hot summer and where is it supposed to go?" Mr McKew asked.

"We've heard the water itself will be available at a discounted rate for fodder producers, but what cost will it be and which irrigators in particular will have access to it?"

He said the timing of the decision was also interesting, falling in the middle of the southern dryland hay making season.

"Some of the hay has been cut and baled and we were already seeing downward pressure on prices, will this news place further pressure on values, potentially throwing out budgets for hay producers," he said.

Mr McKew said in the longer-term fodder supplies were still likely to be tight.

"At current consumption trends we would expect there will be a shortage of fodder from the middle of next year on, if not earlier."

Both Mr Hosking and Mr McKew stressed they did not oppose plans to produce more fodder, but said far more detail was required before they could come out in support.

$10m will support schools facing financial hardship, including fee concessions for boarding students and $5m from the Community Child Care Fund will help assist centres that are experiencing decreased demand and financial pressure due to families from drought-affected areas.

The story Canberra gives $100m to grow drought fodder, but will it work? first appeared on Farm Online.