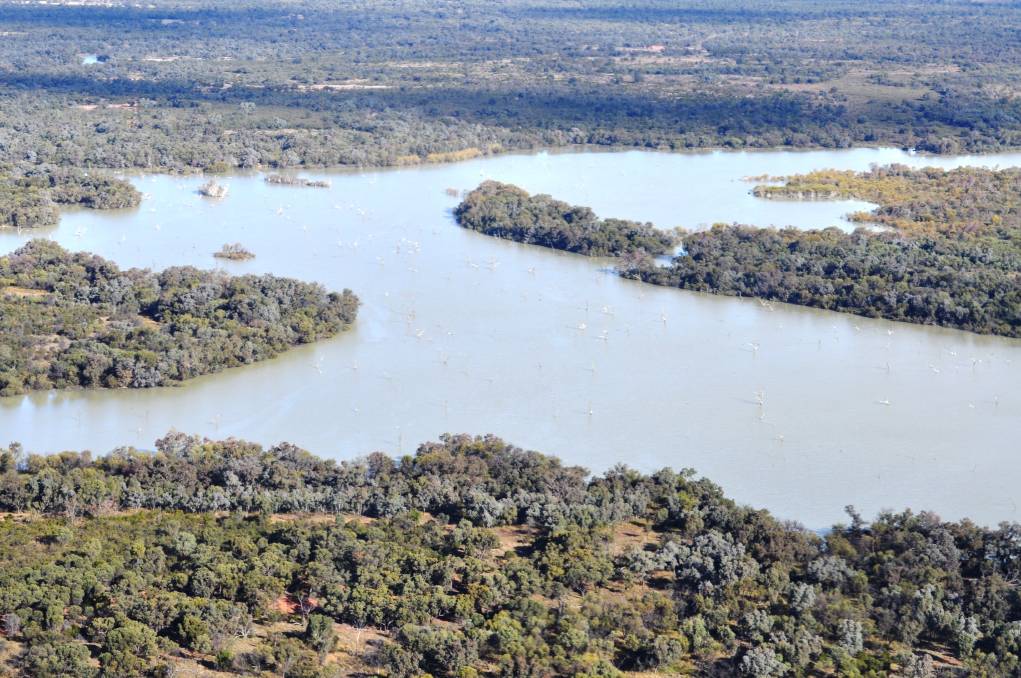 Boera Dam on the Warrego River at Toorale, photographed in 2012.

Any more rain and NSW government may have been left explaining once again why water was held back from dry towns.

A burst of rain over Far West and northern NSW is sending a short, sharp pulse of revitalising water down the parched Barwon Darling River system in Far West NSW.

A section pumping embargo on A, B, and C class irrigation licences will preserve the flow for town, stock and domestic as well as the environment needs until the end of the year.

Meanwhile, NSW government may be counting its lucky stars that it didn't rain too much, highlighting once again its decade of inaction on removing levees at the old Toorale Station.

Until this weekend's stormy rains which ranged from virtually nothing to more than 100 millimetres around Bourke the river had dried up for long stretches, leaving isolated pools of deteriorating water quality.

Water is flowing over the weir at Bourke for the first time in 430 days.

The flush, coming from the Barwon and Border Rivers near Queensland, will be joined by an estimated five gigalitres from the Warrego which joins the Darling downstream of Bourke.

But the drought has bitten so hard that the pulse is not expected to reach too far downstream, meaning it could reach as far as Tilpa depending on how much water is lost wetting the dry Darling River bed.

Wilcannia and Menindee Lakes look likely to miss out on a flush.

Tilpa farmer Justin McClure said the rain was "absolute gold" for the district.

"It's the benefit for mental health of people, you can hear it through the phone," Mr McClure said.

"There's been a real lift in confidence. We haven't had a lot to be positive about for the past three years, but people have just come alive.

"The Melbourne Cup will be a big day, if we can get through the roads to Tilpa!"

Near miss for government

At its peak on Sunday the Warrego was flowing at just a tick over 600 megalitres a day.

The rain over the far north west corner of NSW was heavy but localised, falling on a small portion of the Warrego catchment including near the Darling.

Luckily for the NSW government, 600ML/day is the capacity of the existing pipes running through the old levees which were built on Toorale to capture the water for agriculture.

Were the rain more widespread, NSW government would once again be facing questions over why water was spreading across floodplains in the park behind a man-made structure rather than flow downstream.

In May, a whopping 23,000ML backed up on Toorale's man-made wetlands after heavy falls across the Warrego catchment in April.

Locals criticised the government's inaction and accused the Office of Environment and Heritage (OEH) for ignoring the letter of the law and prioritising the Toorale wetland over the critical human need for water in towns from Wentworth, and upstream to Louth.

Locals praised the environmental managers swift opening of floodgates in response to the latest rain event, which ensured all of the 600ML/day flow made it to the Darling.

There are three lines of embankments in Toorale National park, where NSW Office of Environment have been using the levee system to create a man made wetland for significant bird breeding events.

NSW government has recently removed the upper levee, known as Peebles Dam. The second remains in place (with the pipes allowing 600ML/day of flow), and the lower levee, which backs into Boera Dam, has a set of 600ML/day capacity floodgates to discharge into the Warrego.

OEH is consulting on plans to increase the capacity of Warrego's remaining earthworks, potentially up to 1200ML/day, by 2021.

The federal government has funded NSW with $9m to increase the flow capacity of Toorale's levees and Water Minister David Littleproud has criticised the state government for its inaction.

"I wrote to the NSW Environment Minister in July this year asking why this work has not been completed as the Commonwealth has paid the NSW government to complete it," Mr Littleproud said.

"I made it clear in my letter and still is my belief the work simply has to be done."

"This work should have been completed a decade ago. I've heard the community's concerns about the time it's taken to deliver this project and I am glad it was done in time for yesterday's rain," Mr Kean said.

"The removal of the Dam was Phase One in improving the connection of flows down the Warrego River into the Darling River.

"This project will assist in ensuring water, our most precious resource, remains in the river system and is not held in unnecessary infrastructure, a legacy from Toorale's days gone by."

The Labor federal government in 2008 spent $24 million gifting the old sheep station back to NSW, which turned Toorale into a National Park.

Then Water Minister Penny Wong said the buyback of the land and water titles would ensure the Warrego's water wouldn't be lost to the Darling anymore.

"Returning this water to the Darling will begin to turn around the long-term decline of this once great river," Ms Wong said in 2008.

The story Thirsty Darling gets a drink, but Toorale levees remain an issue first appeared on Farm Online.