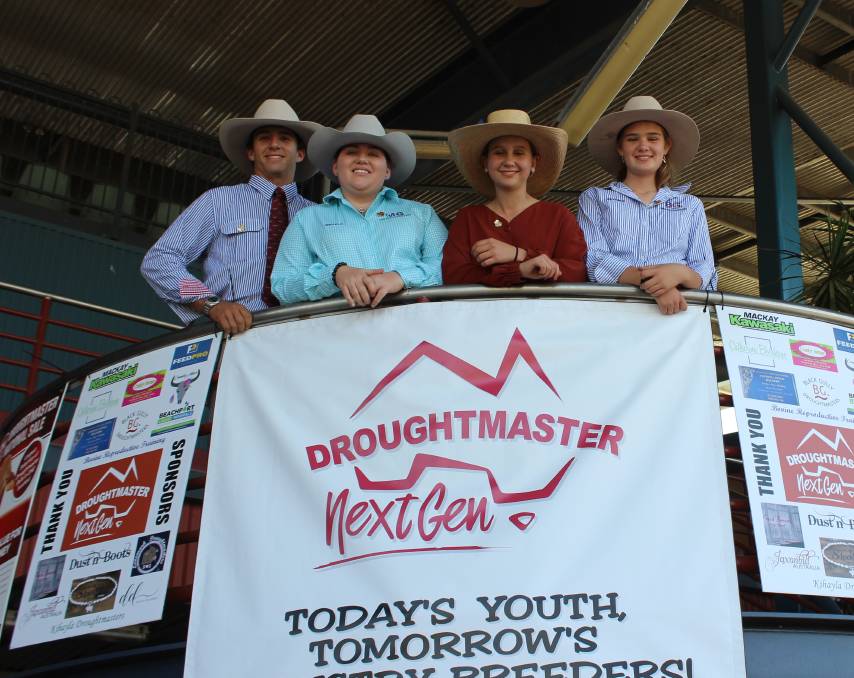 The members of the Droughtmaster Next Gen committee have big plans.

THE future, so we're told, belongs to those who plan.

Therefore the Droughtmaster breed could look ahead with some confidence given the behind-the-scenes activity of a small group of young people intent on nourishing youthful minds.

Essentially the group comprises members 25 or younger and provides a forum through which they can meet and support one another to pursue a common interest in Droughtmaster cattle. A major role will be the facilitation of educational opportunities and industry-relevant activities.

The so-called Droughtmaster Next Gen group is still in embryonic form but members of the foundation committee, led by president Emma Thomson, have big plans.

"A lot of other breed societies have their Next Gen well established and this was our time," secretary Lawrence Sehmish-Lahey said.

"We sounded out people for any sign of interest last year at our Futurity for Young Droughtmaster cattle held in Gatton and at the end of the year and the beginning of this year that interest was gathered as to who would like to be on the committee.

"We put our names forward and we have been chosen as the foundation commttee in our positions."

They hosted their first event at Emerald Ag-Grow earlier in the year, represented by treasurer Mikaela Gauci and committeewoman Chloe Davies.

Their second was a fund-raiser on the eve of the 2019 Droughtmaster National Sale at Central Queensland Livestock Exchange, Gracemere, on September 16.

"The money raised goes to the Droughtmaster Foundation and that money is strictly used for educational purposes," Mr Sehmish-Lahey said.

"We will have access to it to run judging or parading events for Droughtmaster youth or camps or just to help people to go to conferences or workshops.

"We have already had an AI and preg testing course and we will be running more of those."

The driving force behind formation of the Droughtmaster Next Gen group was simple, Sehmish-Lahey said.

"There really wasn't any event that young people could call their own that was run for Droughtmaster Youth or where they could learn about the breed if their family did not have Droughtmasters. At least now they will have access.

"We will be introducing a junior membership hopefully by the end of the year and for those who have no connection to the breed they will have a support base and we can work from there.

"We want young people to be Droughtmaster breeders."

Ms Gauci said a lot of work was ahead of the committee, not the least of which was planning forthcoming events and formalising the length of committee tenures.