KAP MPs Shane Knuth, Rob Katter and Nick Dametto have been described as "a disorganised machine" by rival Jason Costigan.

North Queensland is shaping up as a fiery political battleground leading into the 2020 state election, following the announcement this week by Whitsunday MP Jason Costigan that he had created a new political party aimed at bringing a North Queensland state into being.

North Queensland is shaping up as a fiery political battleground leading into the 2020 state election, following the announcement this week by Whitsunday MP Jason Costigan that he had created a new political party aimed at bringing a North Queensland state into being.

Days after unveiling what he described as "the start of a new chapter in the unpredictable world that is Queensland politics" as parliament prepared to sit in Townsville, Mr Costigan has gone on the attack.

Listing the three Katter's Australian Party seats of Traeger, Hill and Hinchinbrook among the 18 his North Queensland First party is gunning for in the October 2020 election, the former LNP-turned-independent MP described KAP as a well-meaning but disorganised machine.

"They've had a long time to pull (North Queensland statehood) off," he said.

"They mean well but they're not the answer.

"They have an appeal to voters that's reasonably narrow - they can't win at Cluden, let alone Doomben."

Mr Costigan said his years in the media and rugby league game calling in North Queensland meant he was a familiar face for voters.

"I think he's used the word ineffective loosely," he said. "We've successfully got through three private Member's bills, out of 14 in the whole Queensland parliament history, and brought about generational change in the sugar industry with the ethanol mandate, among other things."

He claimed KAP's stocks were sky high following the parliamentary week in Townsville, saying no other party had put any legislation forward that related to regional and rural Queensland.

"I think it's safe to say we'll have three, maybe up to five seats in the next parliament."

Mr Katter holds his seat of Traeger by 28.5 per cent, compared to the 1pc margin Mr Costigan has in Whitsunday.

As well as the three KAP seats, North Queensland First has its eyes on the LNP seats of Burdekin and Gregory, the One Nation seat of Mirani, and 12 ALP seats in north and central Queensland.

After a visit to the Birdsville Races in the Gregory electorate this weekend, Mr Costigan will be touring the Traeger electorate from September 8 to 13, holding informal meet-and-greets in pubs from Boulia to Hughenden.

Mr Katter said his party would work with anyone who had an agenda that favoured rural and regional values but was ambivalent about Mr Costigan's push for a separate North Queensland state.

It's a territory that KAP has traditionally claimed ownership of.

In May last year Mr Katter invited all state MPs and mayors north of a line from Rockhampton to sign a request for the Premier to fund an independent investigation into the creation of a new North Queensland state.

He said on Thursday he couldn't see the value in Mr Costigan's statehood drive, qualifying that it created awareness and discussion.

One the other hand, he said his party had refined its approach with a template for a parliamentary council that it would take to the next parliament when it expected to be in a position of greater power.

Mr Costigan said he was not willing to lay all his cards on the table regarding his plans for a North Queensland state for others to copy.

Boot Brisbane coordinator Bill Bates said his group was apolitical and believed every story was good for their secession cause.

"Not all advocates action their words every day," he said. "We'll provide any information Jason wants, and history, but whether he's effective will depend on what his policies are."

Mr Bates queried the value of starting a new party, saying questions of funding and finding acceptable candidates were ones that had to be answered.

"I was surprised he went that way - I thought he would have stuck it as an independent," he said.

A rally focused on a separate North Queensland state was held in Townsville on Tuesday following the 300-strong grower and grazier rally against the state government's proposed reef regulations.

They might have been heartened by a recent Brisbane media poll asking if Queensland should be split in two - of the 1132 voters, 81 per cent answered 'yes'. 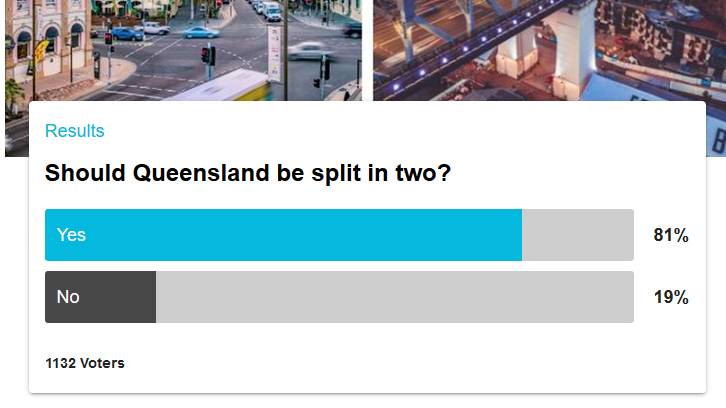