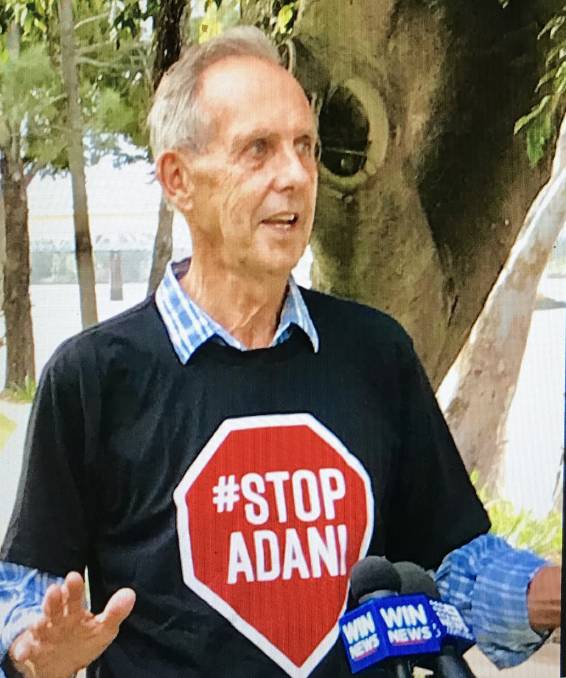 Bob Brown, once a federal senator, is leading a convoy of anti-Adani mine protesters and is unruffled by the growing opposition to their campaign.

FORMER Senator Bob Brown has rejected notions he and cohorts are beginning to despair of winning the fight to thwart the Adani mine project in the Gallilee basin.

Mr Brown, once the federal leader of the Greens and a staunch advocate for the environment, is running an anti-Adani campaign scorned by most political and business opponents.

The LNP's Michelle Landry, who is hoping to seal a hat-trick at the May 18 poll after holding sway in the past two federal elections, said mining was part of the region's DNA.

"It is good to have renewables but base power is necessary and coal from this area drives that."

Labor candidate Russell Robertson is a miner and feels "outraged" for his colleagues and family.

"It is sometimes hard to work out which party hates working Australians, and coal miners in particular, more. Is it the Greens who want to lay waste to entire industries or the LNP who back their multinational mates?

"The Greens want to shut coal mining down altogether while the LNP want to starve coal miners by siding with multinationals over the interest of local workers."

Senator Pauline Hanson said "greenies" and "mine haters" were completely out of touch with the regions.

"They are all hypocrites. They want all the benefits of coal power but on the other hand want t wage war against it. You know what will happen if mines such as the Carmichael mine do not proceed - India will burn its own brown coal and that's far worse for the environment than anything to come out of the Gallilee basin," Ms Hanson said.

Capricorn Enterprise chief executive Mary Carroll said attacks on coal mining was nothing less than an attack on "our first world lifestyle", which she said was impossible without coal.

"Employment in the mining industry in the Rockhampton and Capricorn Coast region at 6.5% of the working population is four times that of the national figure of 1.7%." Ms Carroll said.

"We live in a region that enjoys the economic benefits of mining as well as a pristine natural environment with stunning landscapes on land and on the reef. The mining and tourism industries complement each other in our destination and are not mutually exclusive.

Neil Lethlean, Regional Economic Development Manager, said regional Queensland was being starved of support and the possible loss of a mining project such as Adani-planned Carmichael project could be catastrophic.

"For the Galilee Coal Basin, approval of the Carmichael Coal Mine is strategically important for any number of reasons the most significant being, No Carmichael Mine - No Galilee Basin Coal!", he said.

Mr Brown said the circling of opponents reminded him of the battle to preserve the Franklin River in Tasmania in the 1980s.

"I have seen it all before and even driving in here today I was given a two-fingered salute by a couple of gents," Mr Brown said as he addressed media on the banks of the Fitzroy River.

"But that's part of the wonder of a democracy - people have their right to comment.

"That's all we're doing. We want to keep this issue top of mind leading up to the election otherwise it would get swallowed.

"The important issue here is the future. When people vote we hope they just don't think of their children or the children of some rich multinational owner but of their grandchildren and their children.

"There is too much at stake. Things such as the reef are already dying and this is our opportunity to change."