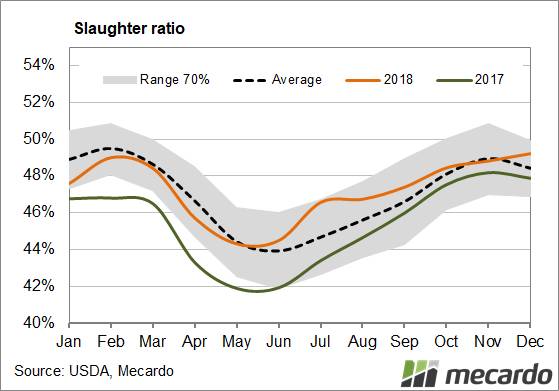 The Stock Take: Mecardo's Matt Dalgleish crunches the numbers on the US cattle herd.

The female slaughter ratio (FSR) remained elevated for much of the second half of 2018, only moving back toward the long-term average monthly trend pattern in November 2018.

The higher than average FSR for much the second half of the season saw the annual average FSR come in at 47.2 per cent for 2018, the highest it has been since 2013.

When the ratio is above 47 per cent, this typically means that the US cattle herd declines (Figure 2). 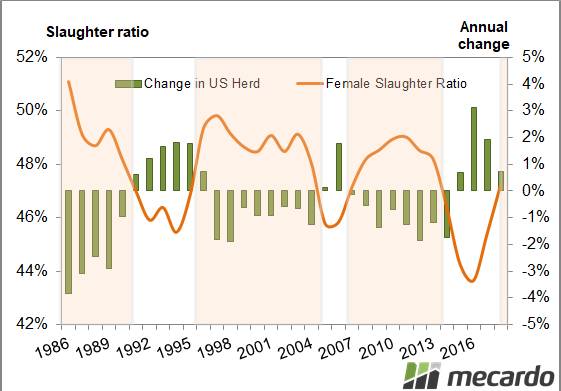 FIGURE 2: US female slaughter ratio to herd change. The shaded zones show the relationship between the FSR threshold of 47 per cent and annual change to the US cattle herd. The shaded area depicts when the FSR has been above 47 per cent and coincides quite clearly with a herd in liquidation.

The US have been in an expansion phase for the cattle herd since 2014 and analysis of their cattle cycles over the last century shows that the average cycle, from rebuild to liquidation, lasts about 10 years.

This suggests we may not be far off entering another liquidation phase of the US herd.

The annual average FSR for 2018 confirms we have just crept over the technical threshold that indicates a liquidation has begun, so it will be useful to keep updated on how the FSR trends during the early part of 2019, to see if female slaughter levels remain elevated.

During the early stage of herd liquidation, it is not uncommon to see cattle prices decline as the weight of additional slaughter and production hit the market.

However, toward the latter part of the liquidation phase prices often rebound, as consecutive years of herd draw-down tightens supply.

The story US poised for liquidation first appeared on Farm Online.