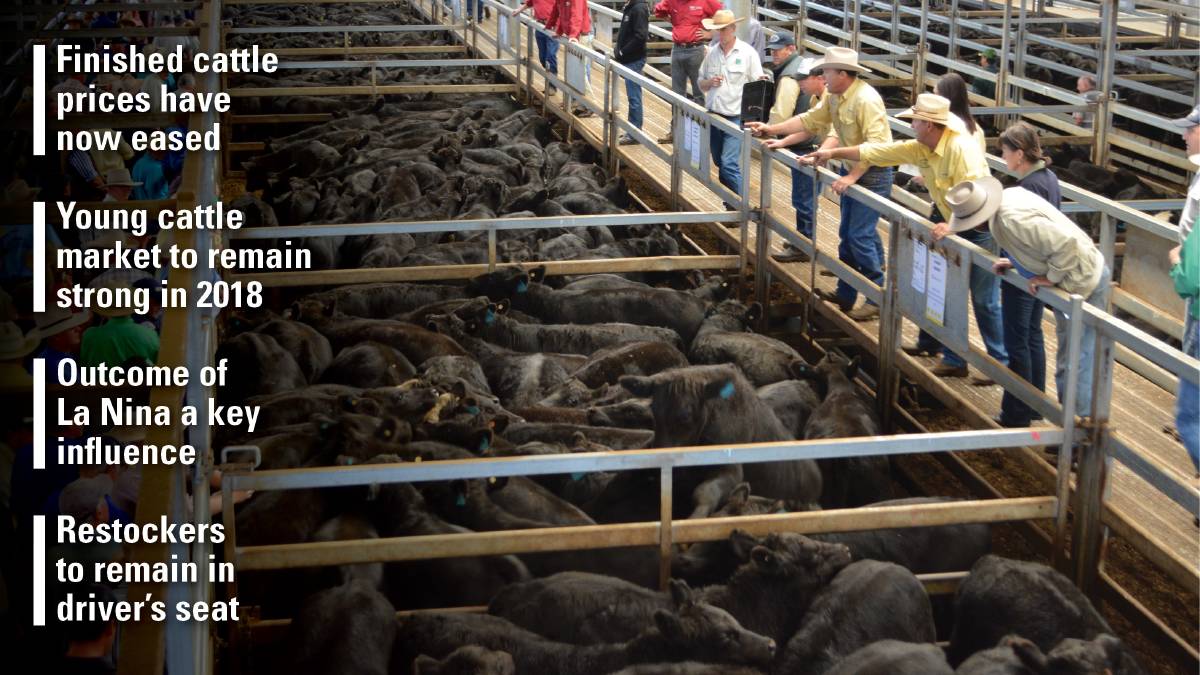 Supply will lift but prices will still be relatively strong.

CATTLE supply and prices in 2018 will largely hinge on how the Queensland wet season plays out but producers can bank on the market staying above the five-year average.

Finished cattle prices have eased in the past few weeks ahead of Christmas processing plant closures and in response to a softening in United States import prices.

Young cattle prices, however, have held their intensity thanks to rain in northern growing regions and analysts are in sync on the fact restockers will again dictate the shape of the market in 2018.

The benchmark Eastern Young Cattle Indicator (EYCI) is currently sitting at 569.75 cents per kilogram carcase weight, having rallied in excess of 60c during October and then holding its ground until now.

Meat and Livestock Australia (MLA) says slaughter cattle supplies will increase in 2018 but still not return to levels seen before the herd rebuild started in 2016.

The outcome of the La Nina event, recently declared by the Bureau of Meteorology, looks to be a major influence on fortunes next year.

Mecardo analyst Matt Dalgleish said the forecast for a weak La Nina would encourage the continuation of the herd rebuild -  although the distribution and intensity of rainfall would be key.

“Good rain in the right places will keep prices reasonably well supported and mean we will see very mild declines over the season as the supply and production levels increase,” he said.

“A failed rainfall event or a non-event La Nina will place greater pressure on prices to see a somewhat sharper correction and may catch some out.”

“We’ve had a cracking season and herd rebuilding is in full swing,” he said.

“The numbers coming into local works are down but cattle are heavier - the availability of feed and the end product being a bit cheaper than what people expected has meant they’ve looked to put the weight on to make a margin.

“Remember big money was paid for these weaners.”

Indeed, MLA analysts report average male carcases have been up 10kg year-on-year while females were up 7kg.

The high historical numbers on feed - three quarters in a row of a million plus head - have also contributed to rising carcase weights and a 3pc year-on-year increase in beef production for 2017.

Mr Harvie said the imbalance between calf and fat prices was still evident as southern weaner sales get underway.

“Weaners are only making 20 to 30c less than last year but fat prices are back around 60c liveweight on last year,” he said.

“What that shows is there is still confidence in the job, people are still taking the punt on trading.

“It also means winter supply will likely be very tight.”

“The north has had a reasonable start and we have the bias of a modest La Nina running for us - there is a  better-than-even chance herd rebuilding will proceed, supporting strong young cattle prices in 2018,” he said.

Central West Queensland was still extremely dry, properties were destocked and the ones with cattle were only lightly stocked, producer Rob Atkinson, “Katandra” at Hughenden said.

“Some of this country has been so badly hammered for going on five or six years, it can’t be stocked to anywhere near normal capacity for a long time - it needs time to heal,” he said.

“A wonderful January and February seasonally would deliver some demand for breeding cattle but it will be a gradual easing back in.”

In the Northern Territory, pastoralists are expecting restocker demand, and prices, to flatten out over the next quarter.

Good seasons for a few years running has meant most properties are well-stocked and cattle are in good condition.

Northern Territory Cattlemen’s Association’s Paul Burke said most had been able to take good advantage of the strong prices and set cattle for specific markets throughout the year.

Demand from live exporters had been down but that was largely offset by higher prices, he said.

“The thought is there could be an increase into the Vietnamese market in 2018 and we are hopeful Indonesia will maintain a similar level,” he said.