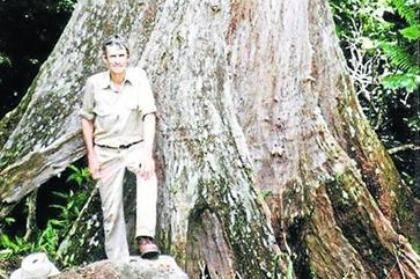 Flashback: Harold West, 68, beside a watergum tree near Crawford s Lookout on the Palmerston Highway. He cut down the tree in 1950.

TIMBERCUTTER Harold West experienced some unusual events during his lifetime.

TIMBERCUTTER Harold West experienced some unusual events during his lifetime.

When cutting timber south of Millaa Millaa at the Maalan, he once saw a very large black cat which resembled a panther and he also believes he saw the Maalan Monster.

The funniest thing that ever happened to Harold when he was cutting timber was that he used to cook roast meat in a wood stove at their bush camp at the Maalan.

There were no refrigerators in those days, so Harold used to leave the meat in the oven overnight, with the door partly opened to cool the meat for sandwiches the next day.

A large bush cat started stealing the meat at night. After a few nights of this, Harold waited with his 12-gauge shotgun. When he heard the oven door creak, he fired the gun.

He certainly stopped the cat, but blew a hole in the back of the stove.

Harold's memory was honoured by a walk that has been named after him, 'The Harold West Walk', that runs through the township of Millaa Millaa. His timber-cutting career spanned for 40 years, starting when he was in his early 20s and finishing when he was 64.

Although having been a timber cutter for most of his life, Harold loved the rainforest and was passionate about caring for the environment. He was a visionary in maintaining the rainforest eco-system and suggested to the Forestry Department many times that they should supply seedlings to replace the trees that timber cutters felled. However, this fell on deaf ears at the time.

Even after he retired, Harold voluntarily worked around Millaa Millaa, assisted with the town gardens and conducted talks for the schoolchildren about tree planting.

The story Some tall tales from timbercutter first appeared on Farm Online.