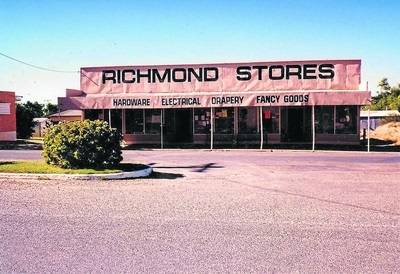 At the age of 85, Jack was still working 10-hour days, six days a week at his beloved business.

THE essence of rural communities is in the people who have lived through their histories a commodity that is invaluable and irreplaceable. When these people pass on, the community loses part of its essence.

THE essence of rural communities is in the people who have lived through their histories a commodity that is invaluable and irreplaceable. When these people pass on, the community loses part of its essence.

Richmond lost a part of its essence on January 29 with the passing of Cecil John (Jack) Brown.

While he is renowned for his local community spirit, it was Jack's national pride and patriotism that led him to the rural township of Richmond in 1944.

A Newcastle boy born and bred, Jack celebrated his 21st birthday on a RAAF troop train bound for Talmoi, a sheep station 60km west of Richmond.

He was headed far from home after three years of RAAF training as a fitter armourer with the chemical warfare division.

While the gas was never used in warfare, the operation was a covert affair.

Doctors treating the men were amazed at the burns, as they had little explanation as to their occurrence.

At the end of the war, the canisters were destroyed by the armourers who shot them to release the gas before burying them.

Social gatherings of the time meant a trip in the lorry for the men from Talmoi into Richmond.

On one of these social trips, Jack met his future wife, Merle Stainkey.

While Jack returned to NSW in 1946 to be discharged, there were limited employment opportunities and he soon returned to Richmond.

They had two children, Michael and Narelle, three grandchildren and two great-grandchildren.

In 1952, Jack and Merle bought Richmond Stores Jack's business for the next 56 years.

Before the purchase of Richmond Stores, Jack had worked as a builder's labourer, assisted Merle's family on Rose Downs and even opened a small electrical shop selling the first electrical goods including radios, tape recorders and gramophones.

However, Richmond Stores was Jack's true passion a building he left his lasting impression on.

While the store advertised its supplies of hardware, timber, gardening tools, drapery, manchester, and outdoor and budget furniture, there were also the Richmond Store 'exclusives' for those who entered the building.

Narelle Lewis, one of Jack's two children and his only daughter, relays her memories of such exclusives.

"It was nothing for me to turn up at work at Richmond Stores to find Dad on the footpath repairing some school kids' punctured tyre before school.

"He thrived on the tourist trade and spent many hours a day talking to tourists from all over Australia about the town and its history. Even today the owners tell me that past tourists still call in and ask about Jack," she said.

Such anecdotes exhibit Jack's tireless dedication and pride in Richmond.