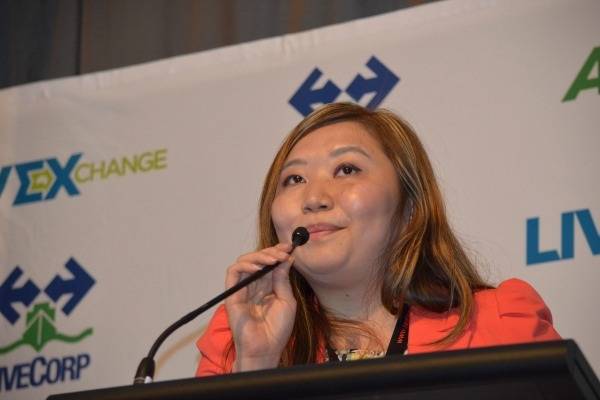 GREAT insight was given on the global and domestic live export market outlook at the LiveXchange Conference at Jupiters Casino in Townsville today.

GREAT insight was given on the global and domestic live export market outlook at the LiveXchange Conference at Jupiters Casino in Townsville today.

NAB Agribusiness Economist Vyanne Lai said that the AUD would be at 95c US by the end of this year and down to 86c US by the end of 2014 which was music to the ears of those in attendance who have been struggling with the AUD being close to or above parity with the US.

Indonesia accounted for 43pc of that total volume of live export cattle with the next closest market being Israel at 11pc.

Overall prices for live exports have fallen steadily in the past year due to persistent dry conditions, which is a problem the industry will have to contend with into next year, with no signs of a good wet season on the horizon.

“The harsh climactic conditions in Queensland and Central Australia pose a significant downside to the outlook with persistent dryness in the North expected to last for some time more,” she said.

But there has been a silver lining with sharp increases being recorded in Malaysia, the Philippines, Vietnam, Russia and China over the same period, which has helped offset some of the fall.

The dairy cattle market has experienced strong growth up 34pc in volume in the past year, led by Pakistan and China with market shares of 10pc and 68pc respectively.

The Northern Territory and Western Australia account for 75pc of total live exports, while Darwin is the largest port of loading accounting for 40pc of total export volumes. However these two states have the highest average farm business debt levels and lowest equity ratios, with the debt concentration per capita being significantly larger in the Northern Territory.

Ms Lai said the concentration of debt in NT and WA could be a concern, but the overall equity ratios, while lower than national averaged, are still reasonably robust.

She said that Australian agribusiness is well-placed in the medium term given the increasing importance of Asia in global trade. With low bases in Asia for commodities such as beef and veal, oil seeds and whole milk powder representing opportunities for future Australian export.

“Rapid rises in global dairy commodity prices has prompted these countries to look for longer-term solutions to contain import prices,” she said.

Land for intensive farming is another comparative advantage Australia possesses with an average of just over two hectares of arable land per capita compared to potential export destinations such as Indonesia, China and Malaysia which all have under 0.5 ha/person available.

Ms Lai said market access and trading partners’ import policies remain the key to a strong live export outlook, including the disbandment of import quotas and the reference price mechanism by Indonesia.

“Live exports are expected to pick up in 2013-14 with ABARES forecasting an increase of 13pc growth in total value.

“Overall the live export outlook is a positive one in 2013-14, although the worsening of climactic conditions in the Northern and Central parts of Australia is likely to pressure livestock turnoffs and prices further.”

Ms Lai concluded by highlighting the significant variability in farm cash incomes due to a host of risks including weather, pests, diseases and price fluctuations, and suggested that risk management is crucial to the successes of farm businesses.

The inaugural LiveXchange Conference continues through until Friday afternoon.