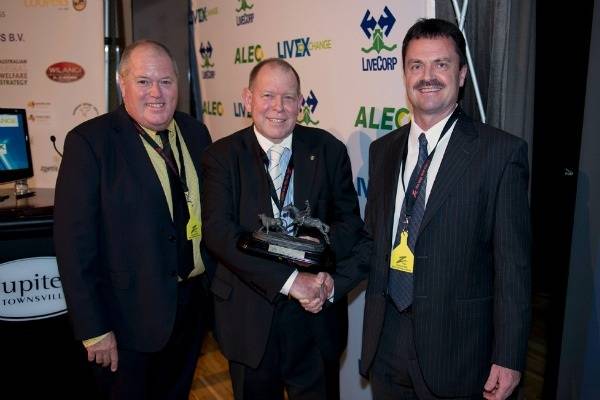 BEING made redundant is not normally seen as the preferred state of employment, but for John Kaus it was the beginning of an incredibly successful career.

BEING made redundant is not normally seen as the preferred state of employment, but for John Kaus it was the beginning of an incredibly successful career.

Many may know John, the live export man, but few would know the path he took to become renowned.

John was born in Brisbane in 1954 and it was in Queensland’s capital where he spent both his primary and secondary school days, first at Coorparoo State School and then the Church of England Grammar School.

He was raised alongside his older brother Roger and two sisters, Vanessa and Andrea, although he spent most of his school holidays visiting his boarder friends on their stations in south-west Queensland.

It was this acquaintance with the bush that led John to diverge from his father’s chosen career – state politics – and instead complete a two-year certificate course in animal husbandry at the Emerald Pastoral College.

These two years were to provide the kindling for the fiery passion John developed for not only working on the land, but with cattle.

So in 1974, with his course certificate under his belt, John set off to gain more experience and have some fun. He spent the first six months of his jackarooing days in New Zealand working in shearing sheds and harvesting wheat.

He then flew from NZ to WA at the expense of David Michael, a cropping farmer from Mingenew, who employed John to work 12-hour shifts on the tractor at an hourly rate of $4.

“It was owned by Rex Jones, who was a stockbroker,” he said.

John’s jackarooing days came to an end in 1976 when he joined Elders GM at the Cannon Hill saleyards as a stock salesman.

“They promoted you to gasoline cowboy, gave you a car, and you’d go out to branches. I went to Emerald for a time as stock salesman and then Clermont; Rockhampton for the Brahman bull sale and then Dalby.”

The gasoline cowboy was only short-lived when the following year John inherited his quarter share in Dellicknora, his grandmother’s property in Victoria, and he moved there with his brother to manage it.

“It was a bit of a change from Queensland, feeding cattle in the snow. The only way to survive winter was an open fireplace, a 40-ounce bottle of rum and importing a bird from Melbourne or Sydney.”

In 1981, John leased the property out, took a gap year to travel around Europe and spent his 27th birthday in Paris.

“I jumped on a ship-jet deal. You used to go on a ship from Fremantle that was carrying cattle to Singapore and 200 passengers.

“There were horses on board and cattle for slaughter. This was my first introduction to transporting cattle by boat other than Marble Island, where they used an aluminium barge to ship the cattle to the mainland.”

John was gone almost a year, but ensured he was back in time for the Brisbane Exhibition.

“You never missed out on the Ekka.”

The following year, John took up a job with Dalgety’s in Texas, Queensland, as a livestock agent. He was there for a year “working both sides of the border” before he moved to Caloundra and dappled in real estate and a small business venture.

For the two years from 1983-84, John owned and operated Crazy Jo’s, a fish and chips shop, while also working for ex-livestock agent, Tony Carrington in real estate.

“While I was there, I started applying for jobs in live export. I just wanted to do something different, something a bit more exciting."

“Bob Gillespie, from Dalgety’s Brisbane, he got me a temporary job working for a company in Darwin – Carabao Exports. I joined them in 1985.

“Carabao Exports was a big buffalo exporting company. I started doing a ship a month as a livestock officer. The first shipment was on MV Lady Geraldine (Skonis Shipping) to Kuching in Sarawak, which is part of Malaysia. We took over 500 head – a mix of buffalo heifers and Brahman-cross heifers.”

Although initially they were small shipments, John made many trips with Carabao to three main ports – Tawau, Sandakan, and Kota Kinbalu – in Sabah and the port in neighbouring Brunei.

“We used to drop only a couple hundred head at each port and each port was only a day apart.”

The ships were captained first by a Filipino and later a young Korean while six Burmese stockmen comprised the crew.

John spent four years and 42 voyages as livestock officer travelling not only to Malaysia, but also Thailand, the Philippines and Indonesia.

“At that time, Carabao had a contract with Dalgety International and we sent about 15,000 buffalo heifers to Indonesia under the trans-migration program of President Suharto.

“We also sent about 5,000 buffalo heifers to Cuba – there was a lot of buffalo back then.”

John had been offered a job in WA working with sheep but wanted to stay at the fore of “a completely unique” export niche so decided to stay in Darwin.

When Carabao Exports was sold to the Sultan of Brunei in 1989, it coincided with a promotion for John, who became marketing manager. He was given the task of deciding where to base a regional office – Brunei or the Philippines.

He chose Manila as “the beauty of the beaches, birds, and beer were better” and moved to the Philippines that same year.

“Being there and working in the marketplace gave us the edge – we worked directly with the recipients of the cattle, travelling all over the Philippines providing lectures on Australian breeding cattle for Land Bank Heifer Importation Programme for Cooperatives.

“In the late ‘80s, the feeder cattle trade started to build up and Carabao was the first supplier of feeder cattle to Monterey Farms, which had a big feedlot in General Santos City – a four day voyage from Darwin.

“I was the first stockman on the delivery of the cattle and we ended up doing yearly contracts in those days when the Australian dollar and market were stable.”

In 1994, Carabao decided to downsize their business, which had expanded from exporting 15,000 head to 50,000 head, to service Brunei primarily, and in April that year, John was made redundant.

He was attending Beef 94 in Rockhampton and travelled back to the Philippines as he was still allowed to stay in the five-bedroom apartment Carabao had supplied.

Now with years of experience in the live export industry, John decided to create his own business – South East Asian Livestock Services, or SEALS.

He quickly formed a loose partnership with the late John Montague from Quality Livestock Australia and while still living in Manila, John sold 42,000 cattle for Montague for two years in a row to the Philippines, Brunei, and Indonesia. In one month alone, they sent 10 ships.

“After those two years, I decided to get my own licence so I rang up Sid Parker, who was my former boss from Carabao and semi-retired. That year I think he was about 70.

“I said, ‘Okay Sid, we will get an export licence, you buy ‘em and I’ll sell ‘em.’ And that was the foundation of SEALS as a licensed livestock exporter in 1996.”

It was a big year for John, who also married, Violeta, the mother of his three children – April-Lyn, Michelle and Scott –that same year.

“We have gone gang busters since then. One of my children’s godfathers was big in the meat business so we started delivering a shipment a month to a company Dealco in General Santos.

“From there, we expanded into supplying Brunei, Malaysia and Indonesia.”

While other companies struggled through the Asian currency crisis in 1997-98, because John was living in the Philippines he was able to conduct all deals in the local currency, Peso.

“It took the risk away from the importers and we kept going while other ships were gathering barnacles in Darwin and Northern Australia.”

This decision paid off with John purchasing Karumba Livestock Exports (KLE) in 2010 in partnership with Sam Collings, Dean Ryan and Sid Parker.

While Darwin is its main port, SEALS has exported from Mourilyan, Karumba, Weipa, Wyndham, Broome, and even Geraldton after a shortage of slaughter cattle in the north this year. SEALS have also sourced a number of cattle shipments from PNG and Vanuatu for Philippines, when Australian cattle prices were too expensive

At the time, SEALS had four ships ready for Indonesia, and had to find another market.

Luckily, they were able to reengage with Vietnam, a market SEALS had entered in 2001 before cattle prices got too high and they had to drop out. One ship was sent to Vietnam, another to the Philippines, while the remaining cattle were offloaded. Some larger pastoral companies took the cattle back, while SEALS had to hold onto other cattle and find alternative markets for them later on.

Vietnam has remained a steady market with SEALS supplying three or four shipments a month to two clients.

With 60 percent of the SEALS market in Indonesia, the ban caused upset and strain on relations between John’s company and his clients.

“We have just been lucky as the three main clients we deal with today have been loyal through all the tough times.”

It hasn’t just been luck but excellent decision making at the right time that has seen John prosper, and it appears the success will continue for years to come.

“Live exports will keep going along. The potential of China coming on board if they agree to health protocols is huge and the rest of SE Asia will continue.

“Indonesia and Vietnam will probably get bigger in volume and we are even getting inquiries from Thailand and Cambodia.”

Since 2001, John and his family have lived in Brisbane spending valuable time on his cattle property near Tenterfield. Today, they own three neighbouring properties and run, ironically, Angus cattle.