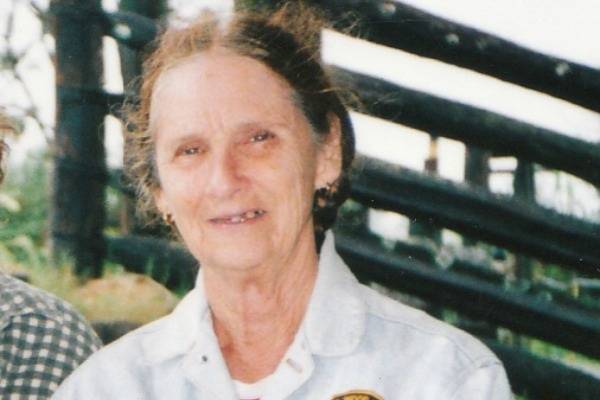 Lenore (Lennie) Wallace is traditionally known as one of Queensland's greatest story tellers.

Lennie Wallace was born on 2nd October 1930 in Nanango, south-east Queensland. From here the family of a mining warden went to Goondiwindi, to Tully, to Charters Towers, and then on to Cooktown.

From here the family of a mining warden went to Goondiwindi, to Tully, to Charters Towers, and then on to Cooktown.

Whilst at Cooktown, Lennie went over to Butchers Hill for a visit before taking up nursing in Bundaberg.

She resigned from nursing to help look after her father Jack Waddell, who died of liver cancer on her 20th birthday.

Finally she went back to marry her beloved Bill from Butchers Hill.

They lived at Harvest Home for some time before moving to Crocodile.

Johnny, Nancy, young Billy, Laura and Lee were born during this time. These were the years of breeding Braford and Brahman bulls and taking them to the shows, along with the kids. Crocodile house was a tiny one and how 5 kids, 2 adults, and a governess or helper of some kind, plus a poddy calf or two, and maybe an orphan roo, fitted into it was pretty amazing.

When Crocodile was sold, the family moved to Springmount, outside Mareeba.

After several years here, the next move was to the west, at Barragunda. They then acquired Walkedge, and then Newburgh.

Bill's health was failing, so he and Lennie moved to Evergreen, at Mutchillba.

After Bill passed away, Len then moved to her final home at Robins St. Mareeba.

She said it was the best street in Mareeba, since she had such wonderful neighbours.

Everyone knows Lennie Wallace the author, who wrote about the early days in the Peninsula with great humour. (eg: Leaves from the Peninsula, Dad and Joey in Possum Gully, Bitten by the Bull Bug).

All these stories were based on actual incidents and will leave you in stitches.

She wrote for many years before publishing her 9 books, and was proud to belong to her 'writers group' for 30 years, a group of women who read and comment on each others work.

There was always music playing in the house.

She was also keen gardener and every place she lived at soon came alive with a variety of plants, trees and vegetables.

She was also very good with her hands and could build and create things from nothing.

Patchwork quilts, wood carving, furniture restoration, jam making, were all in a days work. She came from a time when things could be tough and the tough got going.

She was always cheerful, independent and didn't complain about the way life was, right to the very last.

She always loved writing and often reminisced about RM Williams sending her a typewriter to get her "From the Peninsular" notes in on time to Hooves and Horns.

She wrote under the pen name of "Ninda".

It was always interesting to travel with Lennie, because she had so much history in her head.

It was like going with a tour guide, as she always seemed to know some snippet of information that amazed you...like…"

She knew all the different wildflowers and trees and what rivers ran where.

Lennie instilled a love of books and writing into the hearts of her grandchildren as well.

"If you wrote a letter to Grandma you were always guaranteed of getting a reply and she always included something of interest; an old photo or a newspaper clipping.

I remember the times when Grandma would mind us atNewburgh, she'd pull out an old typewriter and encourage us to write poems and short stories.

She would make them up into little books complete with illustrations and we thought we were ready made authors.

Many hours were spent sitting with her on the verandah while she would read a whole book to us from start to finish, stopping only long enough to top up her cup of tea and grab another cough lolly.

Grandma's house matched her personality, full of quirky little items, that never ceased to amaze us.

We'd play dress up with her clothes, pretend to get lost in her beautiful garden and pinch the odd cherry tomato."

Lennie had a very generous nature and would give things away that she had made or found, to anybody who showed interest.

She loved animals and reared quite a few joeys over the years.

Little Pixie, her Chihuahua, got the lions share of her attention in recent years as her doting companion.

After 51 years of never being in hospital ( they were places where you only went to have kids!) Lennie was lucky to have passed very quickly, 8 days after her 83rd birthday, on 13th October 2013.