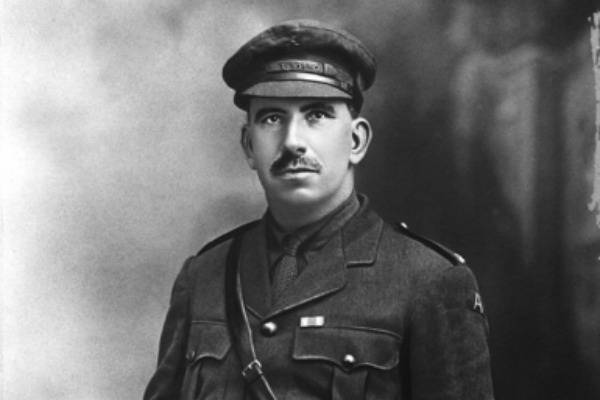 A studio portrait of Chaplain Major McKenzie, MC, of the Salvation Army taken in 1918.

BY 1939, historical events, namely the starting of another world conflict which was to become known as the World War II, caused many of the events and great characters that had emerged from the 1914-18 conflict to be largely pushed to the background of the public psyche.

BY 1939, historical events, namely the starting of another world conflict which was to become known as the World War II, caused many of the events and great characters that had emerged from the 1914-18 conflict to be largely pushed to the background of the public psyche.

Many VC winners, well known Generals and places of battles that were so much a part of the speech and recent memory of Australians in the 1920’s and 1930’s were in many ways superseded by the impending onslaught of another conflict that was to engulf the society.

So it is that many well-known characters of the post-1918 era remained largely unknown to modern generations until more recent times. One such character is very unique indeed, as he was a non- combatant Salvation Army Chaplain known as “Fighting Mac”.

Born William McKenzie in Scotland in 1869, he came to Australia as a 15 year old with his family where they settled on a cane farm near Bundaberg. A big strong lad William excelled in the outdoor life working on farms, with the intention of spending his life as a farmer.

An encounter with the Salvation Army soon changed his career path however! Finding the practical Christianity of the Salvation Army very appealing, William joined the Salvo’s and trained in Melbourne before taking up a position in Newcastle. He became known for appealing to the everyday person, meeting their spiritual needs wherever they were. With the Salvation Army he spent time in several parts of Australia including a stint in Charters Towers.

In 1914, Mac travelled to London for the World Congress of the Salvation Army and when war was declared in August 1914, he was back in Australia and volunteered for chaplaincy in the new Australian Imperial force. He was accepted and so began a remarkable chapter in his and the Australian experience of the war.

He was assigned to the Victorian-based 4th Battalion, where the big Scottish born Queenslander gained respect by training with the men, sweating and digging fox holes with the best of them as well as leading church services and organising boxing events.

He was reported to have jumped in the boxing ring himself on the odd occasion. He gained the nickname “Fighting Mac” and landed on Gallipoli with the rest of the 4th Battalion and it was here that his fame soon spread. Not because he was trying to be a hero or bring attention to himself, but because he took the vows of chaplaincy very seriously and made sure he was where the men were, in the trenches, suffering the same hardships.

He helped with the wounded and carried supplies to the men and one story stated that after observing the water carriers struggling up the steep hills to the trenches on Gallipoli, he went out during the night and cut steps to make it easier for them.

Officially chaplains were not in actual battles, but word soon spread that Mac told the men of the 4th Battalion, just before the infamous battle of Lone Pine, that “I have preached to you, prayed with you, I am not afraid to die with you” There were reports he joined in the attack on Turkish trenches, armed with a shovel.

By the time the Gallipoli campaign was over he was known throughout the forces as a true, honest, hardworking man of God. (And he was not the only Chaplain to achieve such status among the fighting man).

His health had suffered however and by the time of the Gallipoli evacuation he had lost 32kg and at 47 was one of the older members of the AIF. He travelled to France to continue working with the troops and like on Gallipoli he insisted on staying in the front line with the fighting men.

Finally though the rigours of warfare, the deprivations of life in and close to the front line took its toll and in late 1917 he was rested. The big hearted man of God was awarded the Military Cross for his services during the World War I and there were rumours that he had been recommended three times for the Victoria Cross. If this were true it was a remarkable thing for a non-combatant .

He returned to Australia and continued working for the Salvation Army and rose to the rank of Commissioner but the war years had damaged to his health. His faith held firm however and he spent some years in Northern China with the Salvation Army where he threw himself into the missionary work with great enthusiasm.

In his later years, back in Australia it wasn’t uncommon for him to be stopped in the street by former soldiers who remembered him and a newspaper article printed in February 1933, in the Hobart Mercury newspaper probably sums up the admiration Australian society held for this big hearted Chaplain.

Returned soldiers and Salvationists combined in a memorable welcome to Commissioner William McKenzie in the Town Hall, Sydney, the other night. Great applause surged through the crowded hall at every reference to "Fighting Mac" The climax came when a grey-haired aboriginal, with a "Digger" badge in his coat lapel, strode forward and saluted him. Commissioner McKenzie seized the man by the shoulders, and hugged him affectionately.

Mr. L. A. Robb (Returned Soldiers' League) spoke of the place Padre McKenzie had won in the heart of the "Digger." "Whenever you need a helping hand, come to us," said Mr. Robb, addressing Commissioner McKenzie directly.

General Mackay read the words of the padre's song, "Sunshine," which, he said, cheered many a war-weary Digger. The song was sung by the audience, led by Commissioner McKenzie.

Responding, Commissioner McKenzie reviewed the work of the Salvation Army, which he described as "a virile expression of militant Christianity." He confided that his own personal experience of the "clink" made him anxious to help as many "Diggers" as possible out of it. When he was a Salvation Army captain in Charters Towers he was sued for blocking the streets. As a Scotsman, he refused to pay the fine, and served eight days' imprisonment as a result.

Referring to present-day problems, Commissioner McKenzie said that the world would have to build on a foundation resting on righteous principles.

William McKenzie passed away in 1947 at 78 years of age and 7000 people attended his funeral.

A man of God, a man of the people and a veteran of the 1914-18 war, William McKenzie the “Fighting Mac” lived out his vibrant Christian faith in a practical way, looking after his fellow man in horrible times during the World War I. It sounds like he did a very good job.