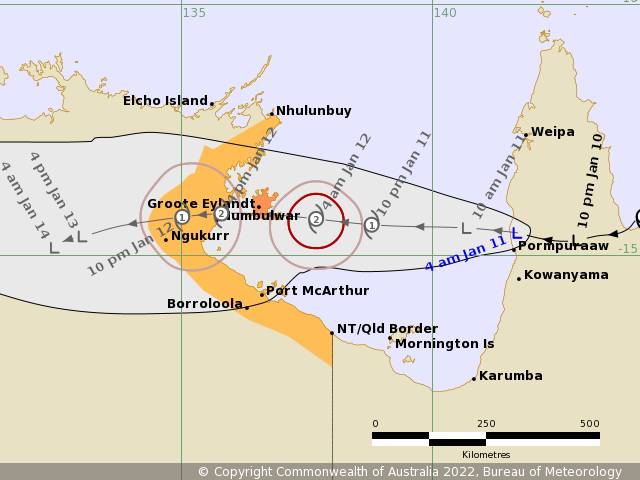 Ex-TC Tiffany has moved into the Gulf of Carpentaria where it is expected to redevelop.

Ex-Tropical Cyclone Tiffany has weakened into a low pressure system and is currently approaching the western Cape York Peninsula coast, after making landfall as a category two system west of Cape Melville on Monday afternoon.

The system sustained winds of 110 kilometres per hour, with wind gusts reaching upwards of 130km per hour near the centre.

The tropical low is now moving west north-west at 17km per hour, and is estimated to be 70km north north-west of Pormpuraaw and 515km east of Groote Eylandt in the Northern Territory.

The Bureau of Meteorology (BoM) said the low has sustained winds near the centre of 55km per hour with wind gusts to 85km per hour.

Tiffany will move into the Gulf of Carpentaria, where it is expected to begin redeveloping on Tuesday, while tracking steadily westward.

On Wednesday morning it will approach the eastern Northern Territory coast where category 2 tropical cyclone impacts are possible. 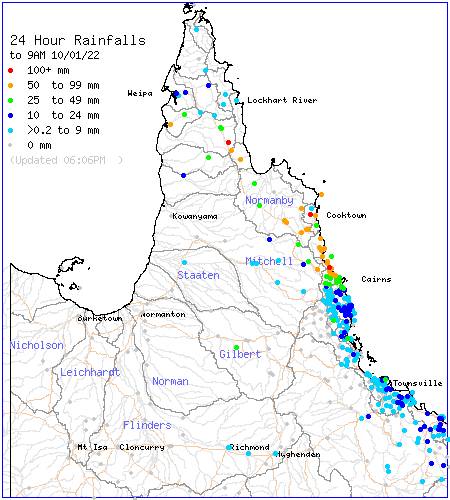 A spokesperson for BoM said Tiffany weakened as it moved inland but is set to redevelop into a category two cyclone in the Gulf of Carpentaria late Tuesday.

"This (low pressure system) is expected to be maintained along the forecast track across the Gulf Of Carpentaria, however the fact the system is moving rapidly west may offset this to some degree," the spokesperson said.

"Intensification is forecast at close to a climatological rate. At this stage the system appears unlikely to have enough time over water to reach Category three but this is still a possibility before the system makes landfall over the Northern Territory, particularly if the systems moves more slowly than the current consensus track.

"Tiffany will continue to be steered westward by a mid-level ridge to the south today and Wednesday. By Thursday, when the system will be over land, an upper trough will weaken the ridge."

BoM said it is unlikely the system will return to Queensland, and that there are a few model scenarios that continue to move the system westward into the Bonaparte Gulf.

These gales are expected to develop on the Northern Territory mainland later on Wednesday between Nhulunbuy and the NT/Qld border, depending on the track of the system.

Tiffany, with gusts to 140 km/h, is expected to cross the coast between Cape Shield and Nathan River on Wednesday afternoon.

Wind gusts up to 100 km/h may extend westward to Barunga and Mataranka overnight on Wednesday as the cyclone moves inland.

Heavy rain is likely to develop across parts of the Arnhem and Carpentaria Districts from Wednesday and is expected to cause flooding of low lying areas and river rises.