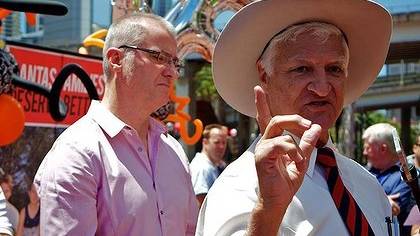 Mr Katter was in Tamworth in Northern NSW when he was ejected from the pub with video obtained by Channel Seven showing pub staff watching on as he enters a taxi outside the premises.

Mr Katter said Australia's governments were taking away the right to freely assemble at the local pub, after he was kicked out of a Tamworth Hotel for failing to prove he was fully vaccinated on the weekend.

"I've had both of my COVID vaccinations, but I don't have a smart phone so I can't check-in using the state government app, but I did give them options to verify," Mr Katter said.

"However, the local media and police was called. This is un-Australian. We have a right to associate and assemble.

"Full praise to the local police officer carrying out their duties in a very respectful manner."

He said was in Tamworth meeting with local leaders to discuss issues that affect inland Australia and polices that will reverse its population decline.