The Jennings family have taken a different approach to managing their multi-species cropping farm at Mareeba. 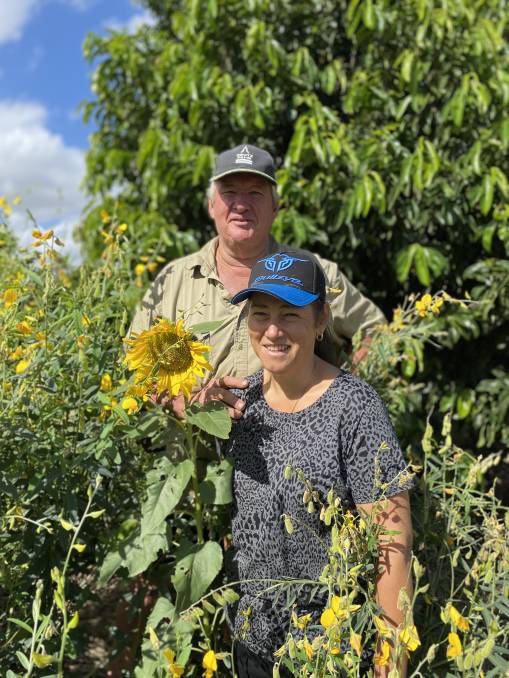 John and Lucy Jennings at their farm near Mareeba where new approaches have improved their production.

When the Jennings noticed a vast improvement in the health of their lime crop after two years without chemical sprays, they became increasingly curious about regenerative farming practices.

Based at Mareeba, John and Lucy Jennings own and manage 130 hectares of farming land where they grow avocados, limes, custard apples and soursop.

The turning point for Mr Jennings came when results from a soil test conflicted with advice from a specialist years ago.

"When I got disenchanted by the advice I had received I started looking for an independent agronomist so I could question them without fear and envy of influence by their job, and the first one I came across was Sally Fields (contract agronomist at the time)," he said.

"I soon realised that we'd only really just scratched the surface on how soil works, and that most current traditional practices were unhealthy and unsustainable."

Mr Jennings attended a basic regenerative workshop and signed up as the first intake of the Healthy Farming Futures program in 2015 aimed at building farmers' technical skills and knowledge to improve soil health and farm sustainability.

"Through that he received soil tests and leaf tests and we really looked at his program and what he was doing," Ms Field said, who is soil care leader for Terrain NRM.

Since then, Mr Jennings has implemented a number of changes on his farm to reduce his reliance on chemical inputs.

"We're mulching all the crops, we're applying biological inputs to the crops when we think it's necessary," he said.

"We also use compost teas, worm cast extract, and various plants and manures in our system to stimulate soil biology.

"We've only been full time farming for the last seven odd years now and the last three years has really made the difference."

In the last eight years their avocado crop has gone from producing about 12 tonnes per ha at best, to more than 20 tonnes per ha.

"We also haven't sprayed our limes with chemicals for over two years now and we have a variety of beneficial bugs almost keeping them free of pests," he said.

"When an entomologist I used to work with years ago heard that I hadn't sprayed my limes at all he asked if he could come out for a visit, and he actually found a beetle that he hadn't seen in the area for a long time - Chilocorus circumdatus.

"We do still use some fertiliser as required, but the need is greatly reduced and I'd eventually like to reduce the chemicals and inputs to zero or as low as possible."

"The group has introduced me to a lot of inspiring individuals, from world renowned speakers and authors to progressive farmers down the road who are quietly working away to improve their farming practice," he said.

"There are a lot of people doing similar things but you don't always know of them.

"You're stuck in your little part of the world doing what you do and it's only through joining WETS that I've got to meet a lot of people doing similar things that we're doing."

According to Ms Fields, the movement is growing, and Terrain NRM have now put around 120 farmers through their Healthy Farming Futures program to date.

"It's so important for there to be that peer to peer learning for producers," she said.

"What you find with these programs, because they do visit peoples farms and they have that soil health focus, people are seeing and hearing and learning about what other people are doing on their farms."