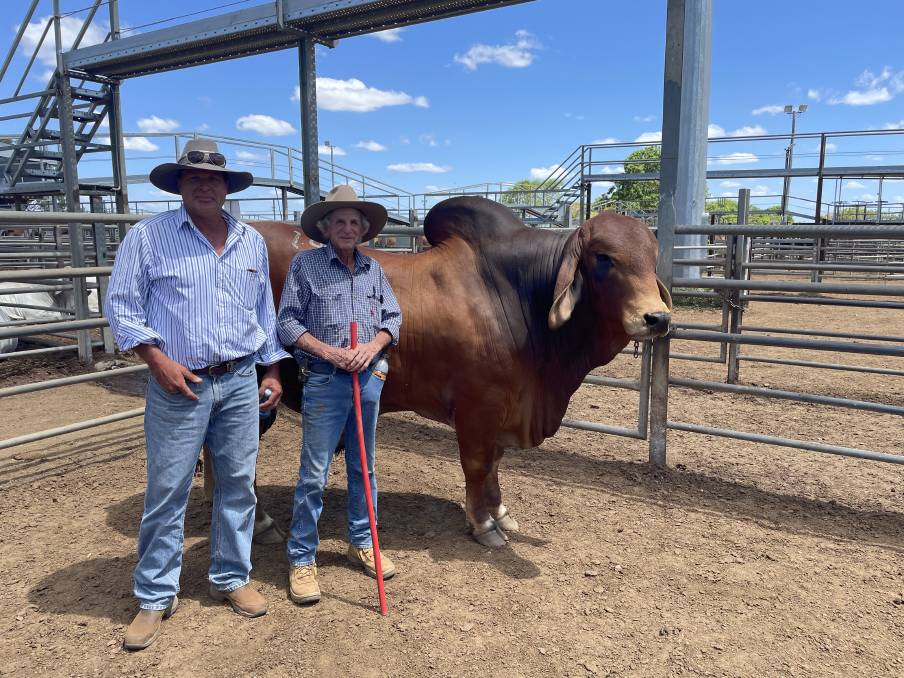 Strong interest, especially from repeat buyers propelled the 2021 Gold City Brahman Sale to a solid result for all vendors involved.

Buyers from across the north of the state and down into Central Queensland made a beeline to Charters Towers for the Gold City Brahman Sale held at the Dalrymple Saleyards on Friday, November 5.

The grey contingent opened the sale to a strong response from the sizeable panel of buyers in attendance. Of the 102 grey bulls offered, 100 found new homes on the day for a 98pc clearance, to average $6650 for a gross of $665,000.

It was early on in the sale proceedings that the top priced grey (and overall top priced herd bull) arrived in the form of lot 3, Kenilworth E8S-75, which was offered by Kelvin and Margaret Maloney, Kenilworth Stud, Mt Coolon, and purchased by Peter and Anne Woollett, Nardoo Pastoral Co, Mallan Park, Millaa Millaa, for $34,000.

Mrs Maloney described the 35-month-old, 930kg bull, with 75pc motility and a morphology score of 77 as the "total package".

"He was our lead bull in the draft. Our goal is to breed good, functional poll cattle, and he is representative of these objectives," she said.

The Maloneys enjoyed a great day of selling with all six of their bulls offered selling for an average of $13,833. The 2021 sales' overall top price was reached late in the day when lot 193, the 34-month-old Doonside Prince Eagle (PP), from Bill and Kay Geddes, Doonside Stud, Rockhampton, attracted plenty of attention with Darren and Alice Marks Winvic, Kilcummin, making the winning bid of $36,000.

"In particular the last three AI drops on the ground by Rockley LP Etheridge (PS) have been our best calves each season. They've averaged 90kg heavier than the rest of each year's cohort. This consistent tremendous growth rate in the calves has provided us with a lot of confidence buying from Doonside," she said.

"The temperament and growth in the Mr C Eagle sons is great, and the homozygous polled (PP) genotype inherent to the line is another trait we look for."

The Geddes saw strong demand for their Doonside bulls with their five reds averaging $15,200, while the two greys they offered earlier in the sale averaged $7000.

Other red vendors who fared well on the Brian and Glenda Kirkwood, Somerview Stud, Charters Towers, who averaged $6428 for their seven bulls; Jim and Bonnie Besley, Bungarribee Stud, Barmoya, returned an average of $7555 for their nine bulls; through their Kangarin and Kangarin A studs, the Dudarko family, Biloela, sold through their 12 bulls to average $6500; fellow Biloela resident Letitia Nicolle, Nioka Stud, sold her four bulls to average $10,250; and Blake and Renee Chiesa, Badilla Stud, Ingham, sold all four of their bulls to average $7500.

The co-volume buyers for the sale were CAAP Holdings, Stamford, which purchased 12 greys for $4083/head, and the Turley family, Turley Cattle Company, Wandovale Station, Charters Towers, who bought five greys and 7 reds for $4333/head.

Winsper Family Trust, Korong, Cloncurry, bought one grey for $4000 and six reds for $5166/head, and Barrett Grazing Southern Cross, Charters Towers, purchased five greys for $5600/head and one red for $5000.

Elders sale agent Anthony Ball said he was pleased with the result, and in particular the quantity of repeat buyers present on the day.

"The sale is really starting to gather a strong following. We inspected all bulls nominated prior to the sale this year ensuring the quality was high across the board. This effort by the agents and vendors was reflected in the average achieved for the 2021 sale," Mr Ball said.