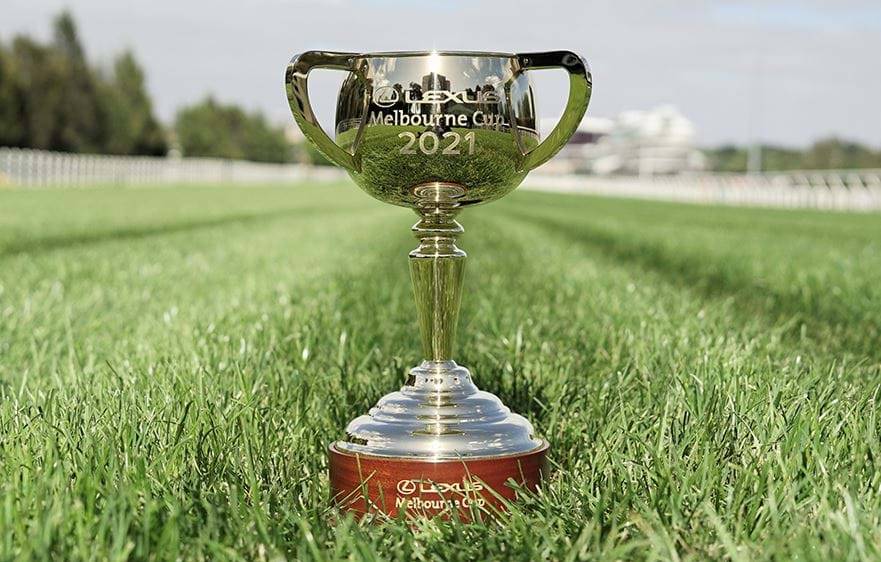 TURF LEGEND: The 2021 Lexus Melbourne Cup, made in Marrickville and presented at Flemington. Photo by Victorian Racing Club.

Since 2016, the Melbourne Cup has been made in the inner west, from gold mined in Australia then refined and crafted by highly skilled artisans in Marrickville

When the owner of the winning horse in Tuesday's Melbourne Cup steps up to the victor's podium at Flemington, 10 artisans from a little-known inner western Sydney workshop will be witnessing 300 hours of their highly skilled labour being held aloft for the whole world to see.

The craftsmen and women at W.J. Sanders, one of Australia's oldest gold and silver smiths and a subsidiary of precious metals services group Pallion, made the 2021 Cup more than a year ago, hand-spinning sheets of 18 carat gold into one of the most famous trophies on the planet.

They have also completed the 2022 Cup which, like its 2021 version, will commence an annual tour of regional Australia after the race is run tomorrow, giving as many Australians as possible a chance to see the Cup up close.

"The inner west holds one of the best secrets in Australia," says W.J. Sanders production manager Darren May about Pallion, which also makes from scratch the gamut of trophies for the Australian Open tennis tournament and the Bathurst 1000 car race - trophies of legend, like the Norman Brooks Challenge Cup and the Peter Brock Trophy. 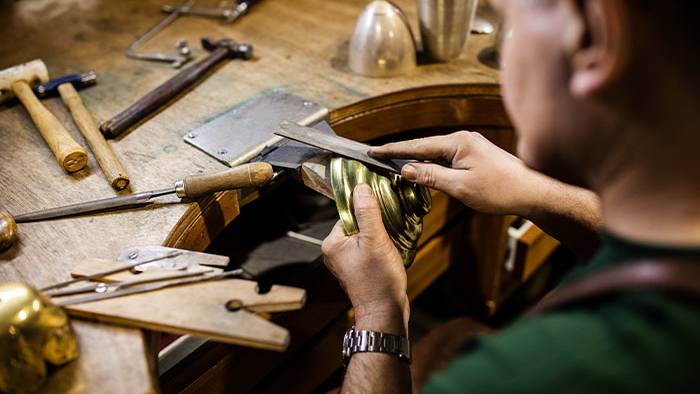 TRADITIONAL TECHNIQUES: An artisan at work on the foot of the Cup in the W.J. Sanders workshop in Marrickville. Photo by Pallion.

But word is getting out: In October, Opposition Leader Anthony Albanese threw a spotlight on Pallion, Marrickville's biggest employer with 250 workers across 20 sites, when he held a press conference at the W.J. Sanders workshop in his electorate of Grayndler, the artisans at work behind him.

The Melbourne Cup has been made there since 2016. An original five-year contract with the Victorian Racing Club has been renegotiated into an ongoing relationship for the foreseeable future, Mr May explains.

Its manufacture at Pallion, he says, ensures it is an entirely Australian creation. The gold comes from a different mine every year - for the 2021 cup it came from Kirkland Lake's Fosterville mine near Bendigo in Victoria. It is then refined in Marrickville by ABC Refinery, Australia's largest independently owned gold refiner and another of Pallion's six subsidiaries, alongside (among others) ABC Bullion and Palloys, a precious metal caster for wholesale jewellers.

"It's about being fair and equitable with our partners - we refine gold for a great number of Australia's largest gold mines, and they are all really excited to be involved in the Melbourne Cup," Mr May said. 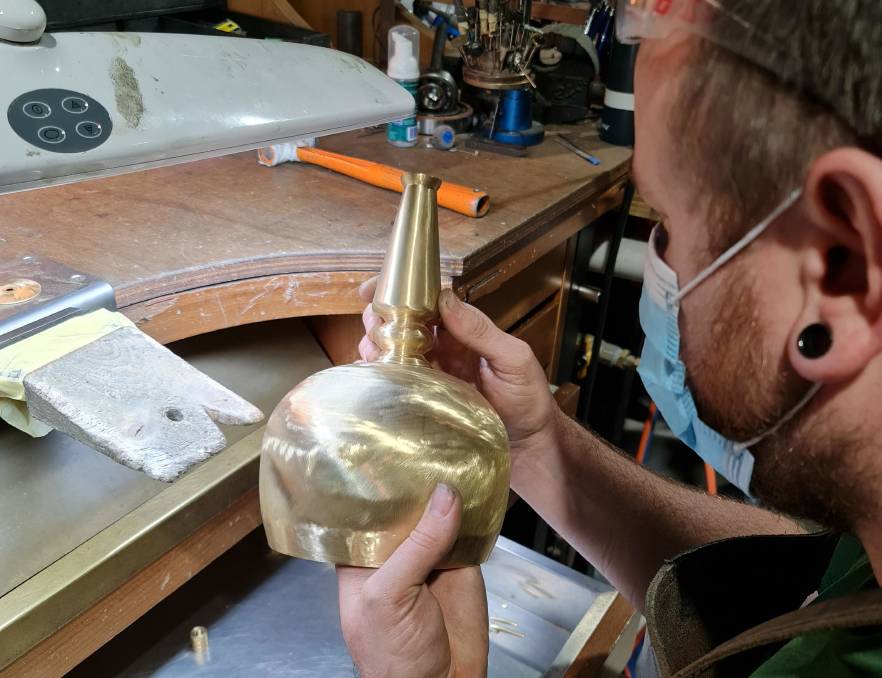 WORK IN PROGRESS: Every single member of W.J. Sanders' 10 staff has a hand in making the Cup, says production manager Darren May. Photo by Pallion.

"It guarantees that every single aspect on this Cup is made in Australia, and in the past it hasn't been. We are proud to say, we make the Melbourne Cup."

As well as the star trophy, the workshop makes at least another 70 replica trophies, all in the "loving cup" design that dates back to 1919 and is defined by its three handles that represent the owner, trainer and jockey.

May explains that the Cup begins its life as investment-grade 99.99 per cent fine gold.

"We then have it alloyed to 18 carat yellow gold, and then we start working with that metal. When we receive it [at W.J. Sanders] it is in giant sheets of gold, worth about $55,000 a sheet," he says. 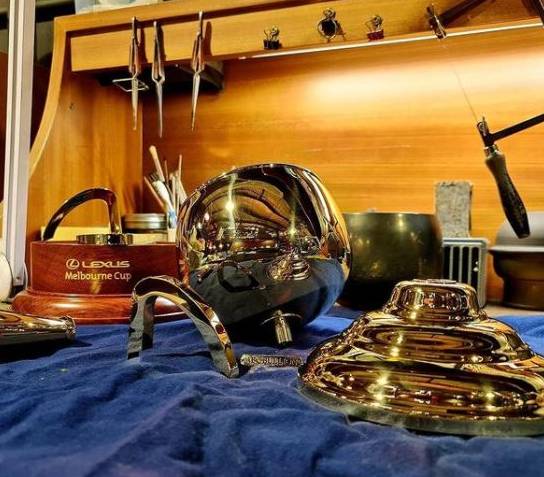 GOOD GOLD: The Cup in its component parts in the W.J. Sanders workshop. Photo by Pallion.

"Then we use traditional techniques - for example, the bowl is spun by hand. Computers can now do that job, but we still do it by hand - it is a hard one to explain, but when you are spinning by hand, the metal talks to you. You can hear it making sounds, and 18-carat yellow gold will tell you when it's had enough, and if you don't stop then, then it will break."

The stem and foot is also spun by hand, and the three handles are each crafted from four pieces of metal.

I think to myself, 'I am making the Melbourne Cup'. It gives you goosebumps to think about it. - Darren May

The trophy's timber plinth is made of West Australian jarrah - as it was back in 1919 - turned on a lathe in the traditional way.

"Every single member of our 10 staff has a hand in making the Cup, whether they are spinning the bowl, soldering it, polishing the gold or engraving it," Mr May said.

"In a nutshell, you could walk in on a Monday morning and look at any person in this place, and know that they have had an integral part in delivering that trophy. 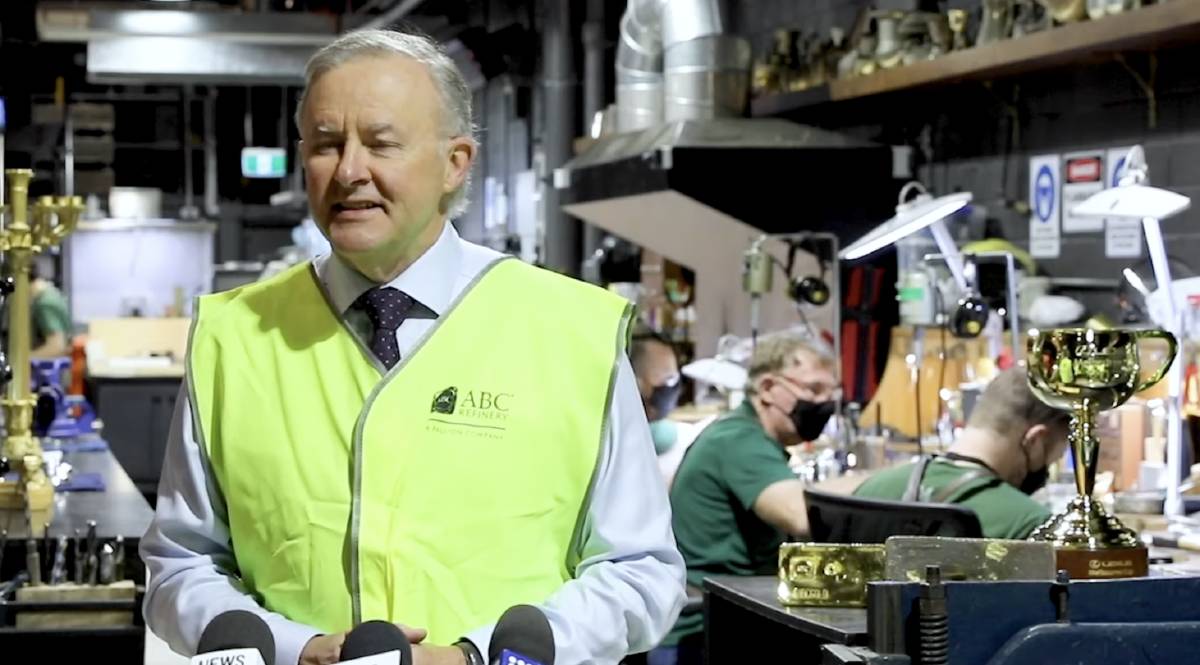 SECRET'S OUT: Opposition Leader Anthony Albanese addresses the media at the W.J. Sanders workshop in his electorate of Grayndler, the Melbourne Cup to his right.

"We are all humbled to be able to do this: the Melbourne Cup has more symbolism attached to it that any other trophy in Australia ... and everyone of us in the workshop has a moment during the making of the Cup when we stand back from what we are doing, and just look at it, and I do it - I think to myself, 'I am making the Melbourne Cup'. It gives you goosebumps to think about it."

As well, the workshop makes the barrier draw cups - mini versions that are randomly selected before the race by the owners of every horse, each with a number on it that determines from which barrier their horse will start. 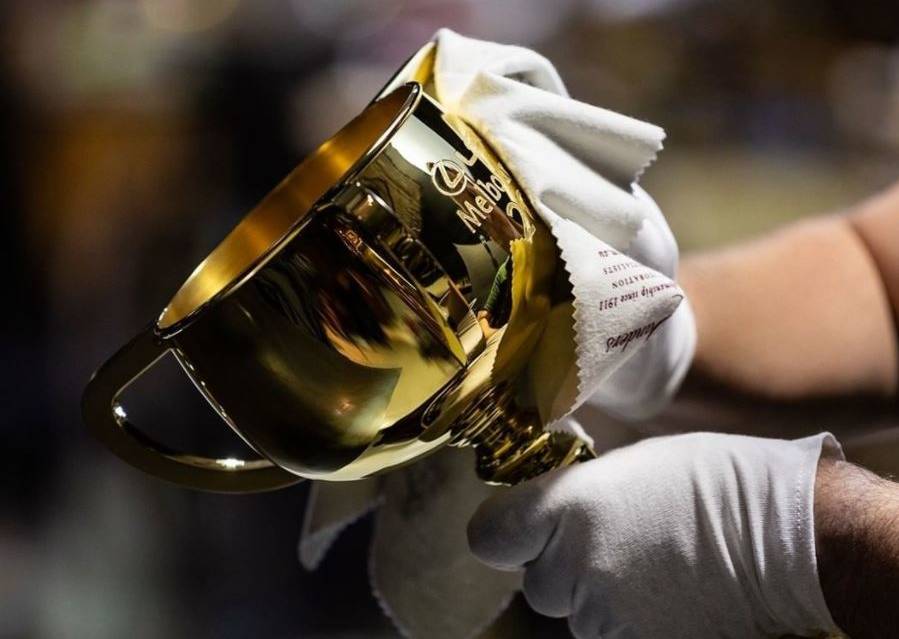 FINAL TOUCHES: The finished Cup gets a polish. Each year the Cup travels Australia before being presented at Flemington. Photo by Pallion.

Then there are the mini tour cups, presented as a memento to representatives of each of the towns visited by the Cup during its annual tour.

There is also a full-scale gold-plated replica made each year. It has come in particularly handy during lockdowns, Mr May said, when the true Cup on a couple of occasions has not been able to get out of Victoria for its regional tour duties. On a typical year, it's a spare just in case two horses win.

"The likelihood of a dead heat is very, very slim," Mr May said. "I have probably put my foot in it now and this will be the first year!"