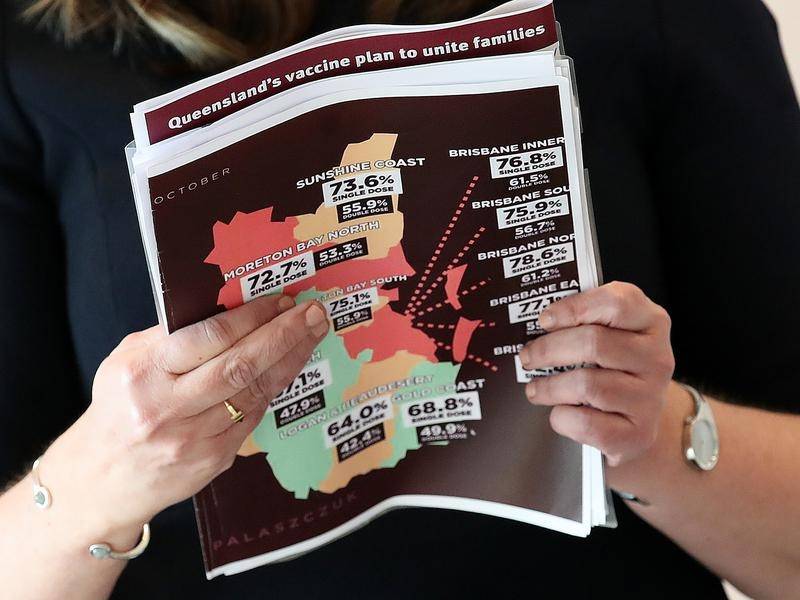 Some Queensland centres and communities will face restrictions if they do not up vaccination rates.

Queensland has recorded two new locally acquired cases of COVID-19, while a truck driver has tested positive interstate after being infectious in Bundaberg.

Queensland has recorded two new locally acquired cases of COVID-19, while a truck driver has tested positive interstate after being infectious in the Sunshine State.

Premier Annastacia Palaszczuk says the two new cases emerged after 8779 tests in the 24 hours to 6.30am on Tuesday.

One is an unvaccinated 17-year-old boy who tested positive after presenting at an emergency department on the Gold Coast.

He is a household contact of a woman who recently travelled to Queensland from NSW with police investigating how she entered the state.

The second case is a woman in her 30s who tested positive in home quarantine after travelling from Melbourne.

The premier says a Gympie truck driver has also tested positive in NSW after visiting Bundaberg and the Sunshine Coast.

"Today's cases show Queensland is not immune to the pandemic," Ms Palaszczuk told parliament on Tuesday.

"We have contained dozens of outbreaks but, as NSW, Victoria, the ACT and New Zealand have discovered ... it only takes one case to cause a massive outbreak. Our only protection is to get vaccinated."

The three cases are the first new local infections reported since Thursday when a Gold Coast man tested positive.

Meanwhile, Queensland's vaccine co-ordinator has warned regional centres and Indigenous communities will face COVID-19 restrictions if they do not reach an 80 per cent vaccination rate by the time the borders reopen.

The state will scrap quarantine requirements for fully vaccinated travellers who test negative when 80 per cent of eligible Queenslanders have had both doses of a COVID-19 vaccine, or by December 17 at the latest.

Commonwealth figures on Monday showed 75.2 per cent of eligible Queenslanders had received one dose of a vaccine and 60.7 per cent were fully vaccinated.

Queensland Deputy Police Commissioner and Vaccine Co-ordinator Shane Chelepy believes the state will hit the 80 per cent target by December 17, but says some areas are struggling to get there.

"I have high confidence that the state will meet the 80 per cent overall across the state," he told the Nine Network on Tuesday.

Commonwealth vaccination figures show that only 31.7 per cent of eligible residents in the Isaac Region in central Queensland have been fully vaccinated, while 48.2 per cent have had one dose.

In the Indigenous community of Cherbourg, in the southeast, 25.7 per cent of residents are fully vaccinated and 33.7 per cent have had one jab.

Mr Chelepy warned individual local government areas will face future COVID-19 restrictions, including lockdowns, if they do not get to 80 per cent before the Queensland borders open.

"The premier and the chief health officer has been clear on this: the areas that don't reach 80 per cent, if we have an outbreak in those areas, restrictions will need to be applied," he said.