Do you remember when 12 cattle were found dead on the side of the Barcaldine-Aramac road? 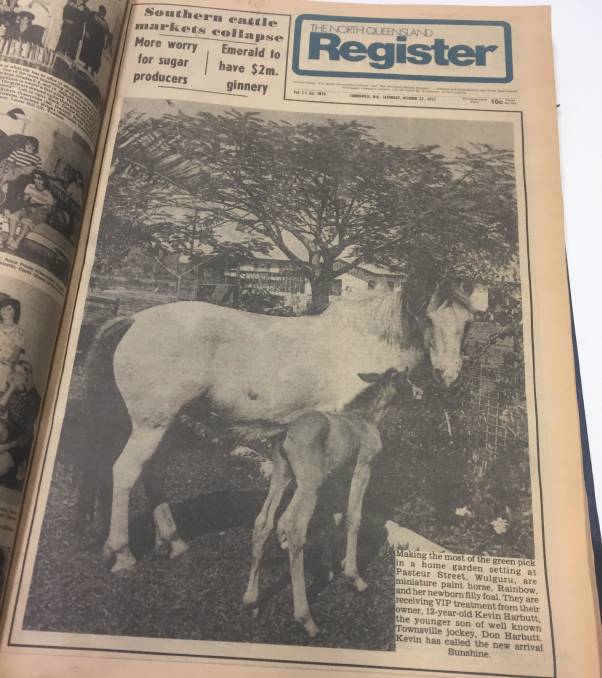 Front page news this week was a photograph of miniature paint horse, Rainbow, and her newborn filly foal enjoying the green pick in the garden at Pasteur Street, Wulguru.

Kevin had called the foal Sunshine.

Police were seeking assistance regarding the shooting of 14 head of cattle near Barcaldine.

Twelve were found dead on the side of the Barcaldine-Aramac road and another two were wounded in a nearby paddock.

Longreach stock squad chief Sergeant Bob McPhee said the 11 cows and heifers, two steers and a bull calf had been shot with a high powered rifle, some as many as four times.

The cattle were the property of Jeffrey Miller and family of Margot Station and valued between $60 and $70 a head.

Large areas of the cane-growing districts were being blacked out every day because of irresponsible cane firing, according to NORQEB general manager David Pearse.

He said dry conditions and a lack of care by cane farmers had caused more blackouts last week than in a single week for many years.

In some cases burning poles had not been reported until some hours after they had caught fire.

Mr Pearse said the cost of restoring a single transformer pole could be as high as $2500, depending on the where it was and how difficult the area was to access.

Advertised in this week's paper was the peninsula cattle property, Yarraden.

It was set for public auction on November 30 on a walk in, walk out basis under instructions from the liquidators of Yarraden Pastoral Holdings Pty Ltd.

The property was 49 kilometres south of Coen and totalled 274,700 hectares across three pastoral holdings and 890,308 hectares of special lease.

It was open run without boundary fences, watered by permanent Lukan and Kendall rivers and had about 4000 to 4500 mixed cattle.

Also read: Remember when: Looking back on NQR headlines