Broxy the border collie has joined the team at Ipswich Grammar School with an important job - to use his doggy intuition and nature to help support the boys who call the school's boarding house home.

Scroll down the staff page of the Ipswich Grammar School (IGS) website and there's one furry face that stands out from the crowd. That will be "Mr" Broxy - the school's boarding dog.

The seven-month-old border collie - real name Ibrox but Broxy to his friends - has come on board with an important job - to use his doggy intuition and nature to help support the boys who call the school's boarding house home.

Broxy came to live at the school in April as part of IGS's mission to do all it can to create a warm and nurturing home-away-from-home environment for its boarding students who are away from their families for many months at a time.

"It can be difficult for the boys at times," said Stewart Drinkeld, IGS's Director of Boarding, who lives on site and is Broxy's main carer. (He also got to name the pup - after the Scottish stadium that's home to his favourite football team, the Glasgow Rangers.) 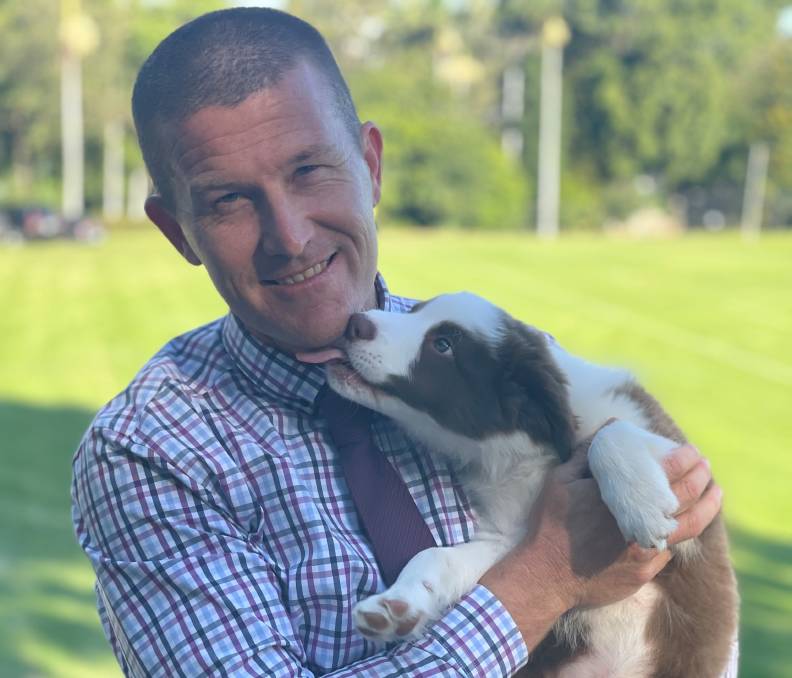 Ipswich Grammar's Director of Boarding Stewart Drinkeld with Broxy when he first arrived at the school. Picture: Supplied

"Anyone can feel a little bit homesick sometimes or go through stressful times and Broxy is now just another layer of the support mechanisms we have in place to create that sense of home. He makes everyone feel good having him around.

"He's already had such a positive effect and has become a big part of the boarding and the school community. For the boys it's just like having a dog at home to play with and talk to. He's at breakfast every morning, he's at morning tea right now, he comes to lunch and sits outside getting lots of pats. He'll go and play footy with them on the oval or go for a run."

Broxy has particularly stepped up in times of high emotional stress for some of the boys such as a death or illness in the family.

"We have had that situation where boarding boys lose family members like a grandparent; Broxy knows if something's not quite right for one of the boys," Mr Drinkeld said.

"He'll just chill and sit with them, or I might just give them the lead and they'll go off for a walk together. Dogs really have that sixth sense. I think people do still underestimate the power of animals."

With many of the boarders coming from rural and farming families having dogs around is something they've grown up with and miss when they leave home to come to school.

For 17-year-oid Rhys Woods, now in his second year of boarding at IGS, having Broxy around reminds him of hanging out with his favourite of his family's dogs, a kelpie called Roxy.

Rhys grew up on the family property 23 kilometres out of Ingham in North Queensland. It's an hour's drive from Townsville and a two-hour flight from Brisbane away from IGS.

"It's a fair hike away," Rhys said. "We've always had dogs and Broxy brings back the feeling of home in a way. You can give him a pat and have a chat with him. Dogs do really seem like they're listening to you - you can tell them your problems and get it off your chest if you need to.

"Broxy's fun to have around; he's very energetic, always wagging his tail, with his tongue hanging out the side of his mouth, and loving all the pats."

Broxy's arrival was the end of a careful process for the school as they searched for the perfect kind of canine staffer to join the dedicated boarding team.

The dog needed to be the right blend of intelligence, energy and friendly nature. While COVID added to the challenge of the search, in the end it was one of Mr Drinkeld's friends whose own dog was having puppies.

"We were trying to find a dog that had a bit of energy and was very good with kids - there are some dogs you wouldn't want in this sort of role," Mr Drinkeld said.

"Broxy is very happy to run around and play with the boys but is also a really calm dog and just as happy to sit at your feet. Being a border collie he's very smart, and very curious - he always wants to know what's going on. He really thinks he owns the school now, and we're okay with that."

Ipswich Grammar School offers boarding for boys from Year 7 to Year 12 with options including full boarding, weekly boarding and selective overnight/evening stays. Our experienced boarding staff maintain a strong family atmosphere and encourage all students to be involved in the social and pastoral aspects of the school. The health and wellbeing of each of the boys is a shared responsibility between the Director of Boarding, resident staff, school medical staff and of course Broxy - our Boarding dog. Find out more here. Catch up with Broxy on his Instagram page here.

The story Broxy the 'boarder' collie is on the job to support young students far from home first appeared on Queensland Country Life.