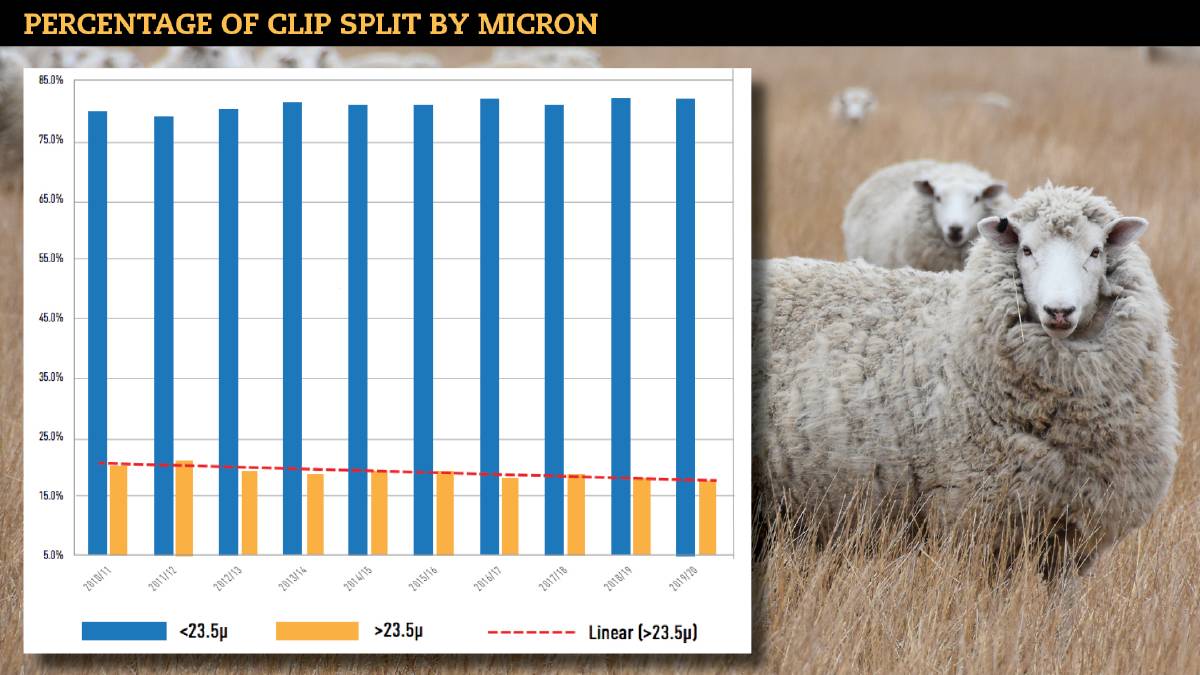 Broader wool could be on track to step into a world of amplified demand, literally, as woollen shoes, amongst other global markets, become one of the new homes to house the increasing supply of higher micron wools.

Significantly, up until January 2021, the Australian Bureau of Statistics (ABS) exports show that just 12pc of the total wool exported was broader than 23.5 micron, signalling that a large portion of the grower-held stocks in Australia are in that broader wool category.

"Whilst failing to be realised at this stage, sufficient information has been received to suggest a swing to a broader wool type may indeed eventuate in the 2021/22 season and beyond," Mr McCullough said.

"And the sire of choice this season is trending towards a meat breed."

Chair of AWI's science and welfare committee James Morgan said he is fully aware of the increasing level of broader wools across Australia.

And he said the proportion is rising steadily, particularly with the increase in crossbred ewes in the southern regions.

"We understand there is an increasing level of broader wools in Australia and AWI are continuing to work hard in that area," Mr Morgan said.

"It is an apparel fibre, so it receives proportional expenditure in our budget on the off-farm research and development (R&D) by our team as well as marketing."

Market hits sweet spot for fine wool growers, but for how long?

He said projects such as the Campaign for Wool in the UK, which also drifts into the European sector, has been successful in reconnecting consumers to the multitude of wool's uses including hardwearing interior products for the home as well as apparel and accessory products.

In addition to this, he said a lot of attention is being given around the space of accessory products, including footwear and bags.

Footwear is probably the biggest growth sector for this and our R&D team are working with major global brands on footwear with the use of broad wools - James Morgan, chair of AWI's science and welfare committee

"There is a full-time person in Germany working on developing upholstery for motor cars in particular using broad wools," Mr Morgan said.

"But probably the biggest area that we are working on is the double-faced fabrics which is where you have mixed microns on either side of an article such as a coat, bags or footwear.

"Footwear is probably the biggest growth sector for this and our R&D team are working with major global brands on footwear with the use of broad wools." Gone are the days of wool only being used for slippers; there is no doubt high performance wool sneakers and other varieties of innovative wool shoes are on the rise.

Thanks to the growing more active lifestyles and casual approach to dressing, tapping into the world of runners is a smart choice in today's global market.

And gone are the days of wool only being used for slippers; there is no doubt high performance wool sneakers and other varieties of innovative wool shoes are on the rise.

But Mr Morgan admitted they need to keep working heavily in the development of usage in the broad wool sector.

"Clearly it's not quite as fluid as when you're dealing with finer micron wool garments because it's a slower market," he said.

"But we will continue to put proportional expenditure towards those microns."

"For instance, we have more than 130 Woolmark licensees worldwide that are bedding companies that market their wool products with the help of the Woolmark brand," he said.

"Similarly, we have a number of Woolmark licensees that manufacture and market wool carpets and we are also starting to see an increase in the use of Woolmark certified car interiors.

"Our promotion of all Australian wool, irrespective of the micron, and the Woolmark brand is beneficial to all wool including broader wools."

AWI chair Jock Laurie admitted there is very much a lull in prices at the broader end of the market at the moment.

"Nobody in the industry likes to see it," Mr Laurie said.

"I would like to think that the work and the projects that we are undertaking, will certainly drive demand for those areas.

"We will continue to look at every possibility we possibly can."