Richmond and Hughenden are the preferred locations for a gin that could directly employ up to 35 staff and cost $35m to build, a feasibility study has found. 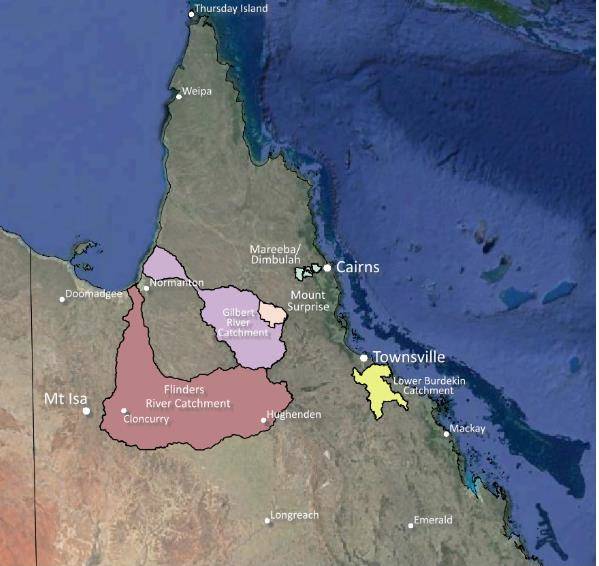 The areas covered by the feasibility study.

Derisking the regulations surrounding the supply of water and land use will be paramount in establishing cotton as a mainstay in the landscape in northern Queensland.

That was one of the key messages in the assessment made into the feasibility of establishing a cotton gin in North Queensland prepared for the Mount Isa to Townsville Economic Zone co-funded by the state government's Remote Area Board funding program.

According to State Development Minister Steven Miles, the study was helping attract potential investors by highlighting the economic benefits that a cotton gin could bring to the region.

The document prepared by PVW Partners identified the importance of confidence, among growers, landholders and others likely to invest in such a facility, that there is long-term sustainability in the industry.

It also found that the current strategy among growers in northern Australia generally to transport their crop thousands of kilometres to gins in central and southern Queensland wasn't a long-term option.

One of many loads of cotton from north Australia on the way to gins in southern Queensland. Photo - Sally Gall.

"Currently all cotton produced in North Queensland is trucked to central Queensland for processing, which is 800 to 1200 kilometres in distance," MITEZ CEO Cath Robson said. "Transport of cotton is a key consideration in assessing the location of a gin, with a primary focus of ensuring reliability of supply by having it located within proximity, ideally less than 350km, to growing areas."

With that in mind, Richmond and Hughenden were identified as preferred locations for a gin, which the assessment said would be viable in a five year horizon.

Speaking on behalf of the Flinders Shire, mayor Jane McNamara said that in her opinion it made sense to locate a gin at the eastern-most location so that no producer would face back-tracking after processing, and because Hughenden was at a crossroads that would service all locations, and be on the way to the Port of Townsville.

A secondary growing region located across the Gilbert River catchment and the Mount Surprise and Mareeba-Dimbulah regions could produce more than 70,000 bales.

Growth potential will be largely driven by major water infrastructure and agricultural projects proposed for the region, such as the Richmond Agriculture Project, the Hughenden Irrigation Project, and the Gilbert River Irrigation Project.

The study estimated the cost of establishing a gin at around $35m and said likely options for an ownership structure were a grower-owned model, a corporate owned model, or a combination of both.

Among the next steps it recommended were addressing risks associated with water supply, land use and clearing regulations, and supporting infrastructure, to enhance the attractiveness of the region and industry for new growers.

A detailed business case or further detailed investigation into a preferred location may also be required, the study authors said. To mitigate risks associated with feed availability for livestock, there is also an opportunity for growers to diversify their operations to include fodder cropping, such as this forage sorghum crop planted at Etta Plains, Julia Creek. Photo - Sally Gall.

Ms Robson said MITEZ would present recommendations from the Cotton Gin Feasibility Study at a 'Cropping in the North West' information day hosted by the Department of Agriculture in Julia Creek on October 20.

Other topics to be covered will included spray drift, a review of the 20/21 north west crops, water and vegetation, a regional cropping group, and grain exports, from the Port of Townsville.